Daily life goes on for many Americans but, like thick fog in contact with torrid air, the idea of America is dissipating.

Americans live life at an accelerated pace, with no time to really experience anything they’re doing. They work too many hours without taking much vacation time. They over schedule their children, which by the way, they will eventually regret, wondering why they put themselves and their children through it. I regret it.

Because they’re so busy, a vast majority of Americans are unaware their country is unravelling.

With their lives passing them by at mach speed, politics is a subject few can be bothered with. I assume this is the case, because only half the population could be bothered to vote in the 2016 election… half.

Americans are so busy, many are unaware of the amount of political news reported daily, and they certainly don’t have time to decipher how any of it will affect their futures, because… you know, life.

Timmy’s baseball team just made it to the playoffs. Timmy’s parents didn’t plan for the extra games, and now they’ll have to rush to his orthodontist appointment to replace his broken retainer; his teeth are shifting back already.

The power is out in the detached garage, and the family sedan is trapped inside. No one can find the key for the side door to get into the garage, which would allow them to open the overhead door manually so they can get Timmy to his playoff game and orthodontist appointment. Don’t mention Timmy’s birthday, because his mom is having a hard time getting that day off work.

Timmy is one of three children. Timmy’s family is busy.

In normal times one might say: If you don’t know anything about the candidates it might be better to leave the voting to those who have taken the time to research them.

These are not normal times.

This is your wake up call.

Remember Deutsche Bank? Deutsche Bank May sound familiar because it was fined $630 million for a $10 billion Russian-Money Laundering scheme in 2017, and has loaned Donald Trump over $2.5 billion since 1998. Well, it’s a small world.

The timing of this announcement is a gift to Donald Trump, or maybe it was planned. In any event, by giving Trump an opportunity to install another Supreme Court Justice, Kennedy is handing over a swing vote to Trump.

This matters for many reasons: reproductive rights, LGBTQ rights, voting rights, Trump’s Muslim ban, his cruelty to migrant families, his attack against labor unions… just a few matters at hand that could very well be at risk with another conservative judge.

Trump has announced his plan to delegate the position on July 9. He is in a rush because, come November, if Democrats take back the majority in Congress, it is unlikely he’ll get the necessary votes to install his choice. Democrats regaining the majority is a possibility because, since Trump took office, and regardless of Russian efforts, Democrats have flipped 39 seats in Congress, while the GOP has flipped only 4.

There are some valid reasons Trump should not be allowed to choose the next judge just yet. 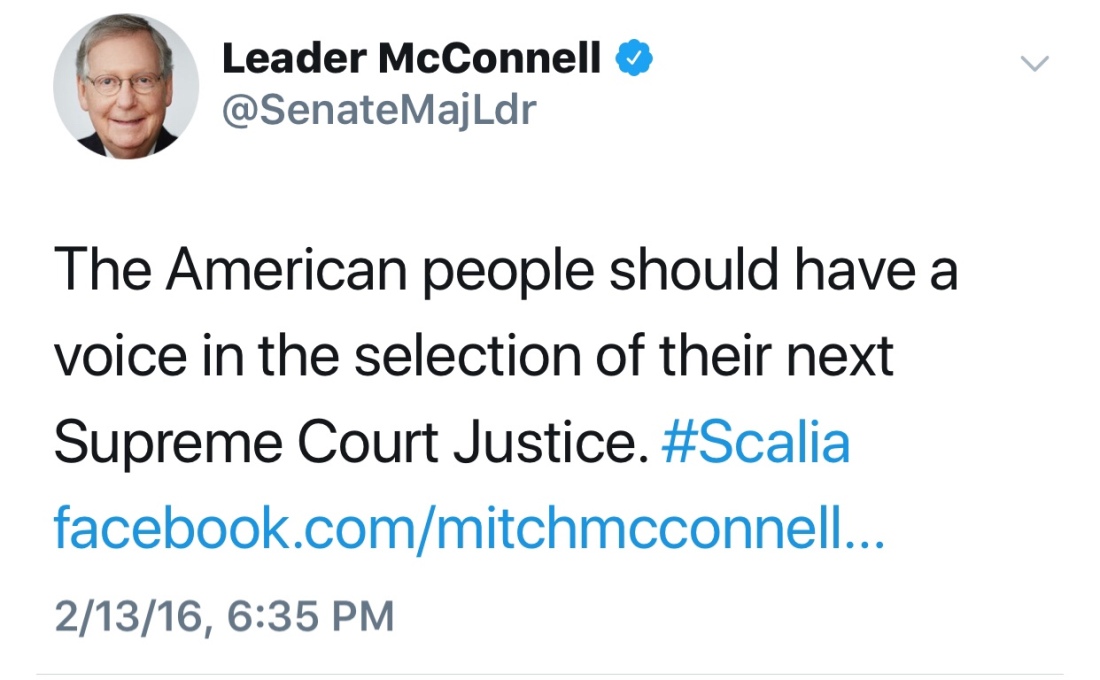 “One of my proudest moments was when I looked Obama in the eye and said, ‘Mr. President, you will not fill this Supreme Court vacancy.'” – Mitch McConnell

Mitch McConnell blocked Barack Obama’s appointment in February of 2016. His argument was: there was an election scheduled 9 months later.

There is an election 5 months away, Mitch, will the same rules apply to Trump? I doubt it, because the GOP never plays fair.

Donald Trump, was given that Supreme Court pick that Mitch McConnell was so proud to steal from Barack Obama. He chose Supreme Court Justice Neil Gorsuch, who has proven his loyalty. He was the tie breaking vote in the Trump travel ban case.

The executive branch of government was meant to have checks and balances.

The primary function of this Congress seems to be protecting Trump from any investigation into his collaborative efforts, with Russia, to steal the presidential election.

Consider another reason to block Trump’s hasty appointment: Donald Trump is the subject of two ongoing criminal investigations. Whether he is proven to have won the election legitimately or not, if he is found to have obstructed the investigation he is a subject of, his fate could end up in the hands of the Supreme Court. The Supreme Court could protect him from indictment, just like the GOP majority Congress does. They could give him the power to pardon himself and others found guilty in the case.

Trump is now poised to take control of the Supreme Court with that gifted swing vote. Trump will have absolute power.

America is on the verge of fascism.

Only 27% of Americans are Republicans.

Republicans, the party of the rich white man and the angry MAGA hat donning crowd, are the minority.

How is it this minority, hell bent on returning us to the days of the KKK, wire hanger abortions, closeted LBGTQ, WWII crimes against humanity, trickle down economics, and the preexisting condition clause in health insurance, has taken over two of the three branches of government, and are poised to take the third? With only 27% of the population behind them how did we come to this?

One way is gerrymandering, the manipulation of district borders in a way to give their party an unfair advantage.

Another explanation for America’s current state of affairs: with hopes of tax cuts and lax laws that would allow them to offshore their assets in order to avoid paying taxes altogether, money hoarding wealthy men who fund the GOP, with the help of Russia, purchased targeted advertising on social media.

The spread of propaganda wasn’t limited to social media. Fox News has, in essentials, become a tool for Trump, a fake news channel, a platform for propaganda, Donald Trump’s State T.V.

Those same Russians also tampered with voter registrations, disenfranchising an untold number of voters. 21 states were told of attempted security breaches, and it has been confirmed 7 states were breached.

There is bad news for the upcoming elections in 2018 and 2020. Russians are continuing their efforts of hacking into our voting systems and they are continuing their disinformation campaigns. In California’s June primary 118,522 voters arrived at their polling stations to vote, only to be told their names were not listed, due to a “printing error.”

This is not a boat accident.

Those aren’t the only reason the minority has taken control of our country and is leading us down a very dark path… no, I’m not talking about “her emails.”

While Americans have been busy with work, children, hot water heaters, and mortgages, decisions and social services that were theirs have gradually been taken from them by their government. Trump is in office because he cheated, with the help of Russians, gerrymandering, and Comey’s bad timing.

But the main reason America is in this existential crisis is…

Timmy’s parents are selfish assholes. They didn’t take the time to vote.