I am not going to complain today, despite news that Kanye and Jared Kushner speak daily. I won’t complain—today, despite Dollhand’s admission that he’s sabotaging the US postal service to keep people from voting by mail, and in the process endangering the lives and sustenance of many people whose prescription drugs and Social Security checks are delivered by mail. I will not utter a negative word—today.

Nor will I mention the CNN news story that last week was the first week since March that numbers for new applications for unemployment came in under one million, and that the Dictator in Chief and his administration are trying to paint the news as a success story for which they credit themselves, and since 45 is still petitioning for a Pulitzer, this might be his argument. 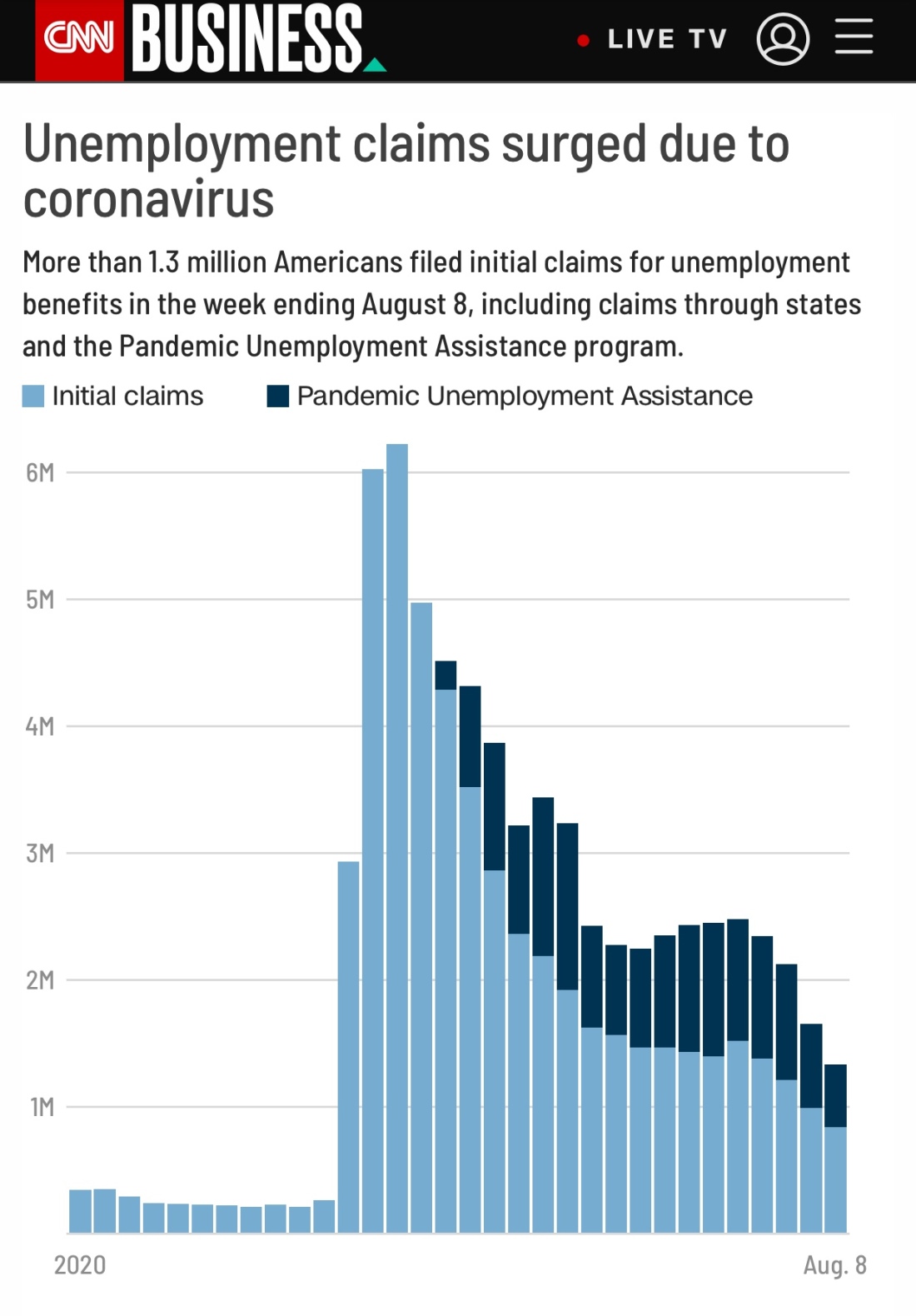 Listen, the number of newly unemployed being lower doesn’t mean any previously unemployed people changed status. It only means more people lost jobs. I can tell you there will be a spike in the fall when the “promise not to lay off in exchange for accepting PPP” expires. Millions of employees who work for big corporations have already received warn letters for October.

The number also doesn’t account for those people who took pay cuts or for those who are now part-time, which makes many ineligible for health insurance and unemployment benefits.

Unemployment was 4.7% when Mango stole the election. It is now said to be 11%. I’m a skeptic. I think those numbers have been manipulated to keep us from knowing the scope of this financial crisis. Either way, even at 11%, unemployment up 70%, the GDP has dropped 33%, the deficit has skyrocketed $3 trillion, a 400% increase, we have 5.6 million US residents infected with C19, and although the claim is that there have been 165,000 C19 deaths, I understand that the real number exceeds 200,000. Remember Trump wanted to be the middle man in the death data.

Here is how weekly new US unemployment claims have progressed since March:

I’m not going to complain about any of that—today, because I am having a good day, and I’ll tell you why. First, I’m still riden my Kamala-Biden high, but something else made me happy, so happy I cried, (yes I’m depressed.)

Way back in early March, the week when 211,000 souls lost their jobs, I bought 8 boxes of my favorite tea, which I haven’t been able to find anywhere, on the internet for a good price. That was when I could still afford tea. Today is August 13.

I can’t tell you if I knew when I ordered the tea that it was in Sri Lanka, because I can’t remember. So much time has elapsed that if I still had a uterus, (and if I were a goat,) I could have conceived and delivered a baby (goat) in the time between the order and delivery of my tea.

I had forgotten about it. Today was like Christmas morning. Hmm… Who do I know in Sri Lanka? [shakes box]

My tea came, and I’m happy! Thank me for my patience! I’m drinking my favorite tea out of my favorite mug now and it was worth waiting for. (Sob, sniff, snort)

And the daily show clip of Kamala questioning Kavanaugh:

9 thoughts on “Thank Me for My Patience”