These are my opinions with regards to the testimony of Dr Blasey Ford vs Judge Brett Kavanaugh, a man who would like to be the swing vote on the Supreme Court of the United States. This is a man who believes a president has absolute power and can not be investigated while in office. He is Donald Trump’s man.

I watched the entire hearing. (I’ve attached a link below.) Dr Ford, who has accused Kavanaugh of sexually assaulting her when she was 15 years old, and he was 17, was polite to everyone. She answered every question. She tried to contain her emotions, although at times you could see she lost the battle, almost always when she was praised for her bravery. I wept with her. 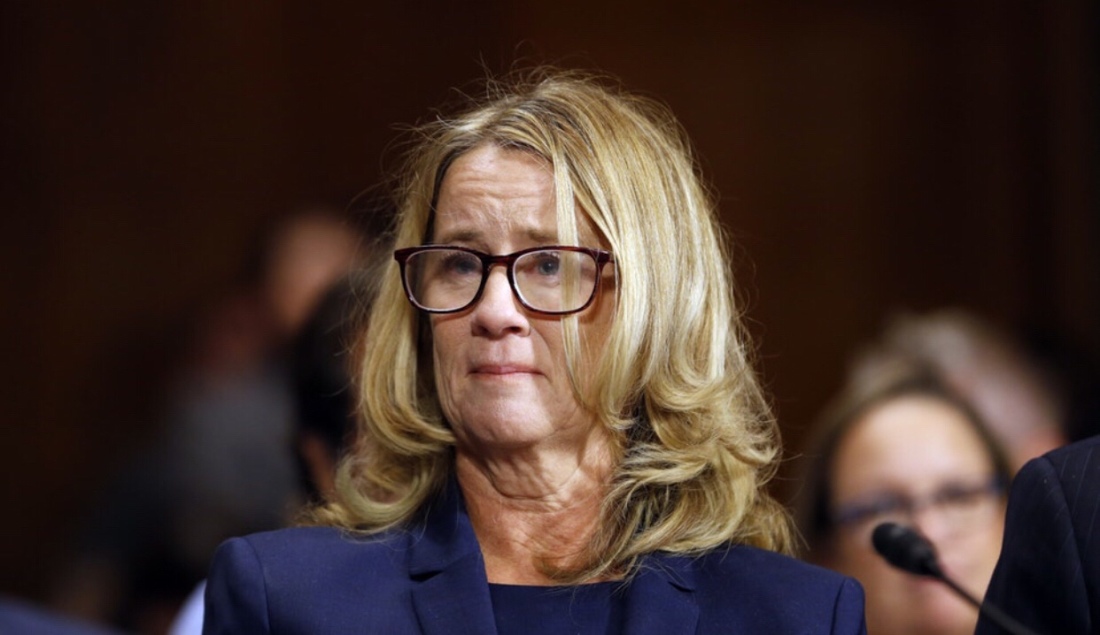 The Republican’s “assistant” (what they call a prosecutor with a vagina) Rachel Mitchel seemed kind enough, but she was digging for something that wasn’t there: a payoff, a manipulation by Democrats to stall for time… but there was something else. She was concerned about the timing, the unknown date of the attack, and who was there.

Then Judge RapeyK’s turn came. The first point he made was that no one helped him prepare what he was going to say… he wrote his own speech.

I think Kavanaugh has a drinking problem… but only with beer. [sarcasm] How many times did he say beer? Is that normal? He said he “embraces beer.” He repeated tales of his athleticism, as if that makes him immune to alcoholism.

His pallor, the ruddy cheeks and nose, his entire face with a light sheen of sweat, common among people with that proclivity. He drinks water constantly, and takes frequent breaks. 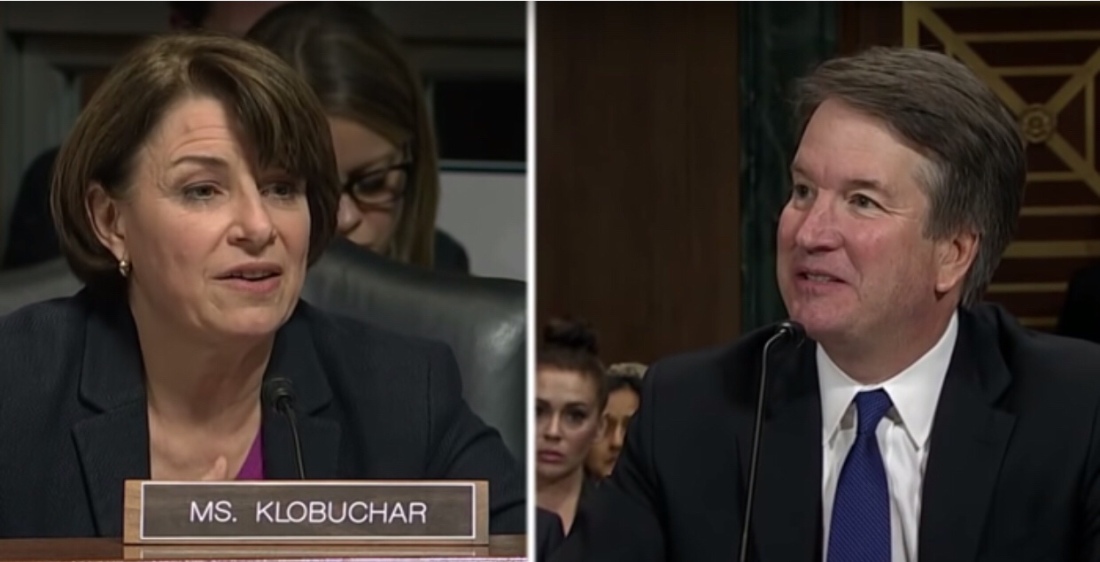 We saw him lose his temper almost immediately, and we caught a glimpse of rage and his contempt for women when he tried to turn the questioning around on Senator Amy Klobuchar when she asked him if he ever drank so much that he couldn’t remember what he had done.

Angry, aggressive, blaming, weeping, playing the victim… are those Judicial behaviors? No, they’re the behaviors of an abusive alcoholic. 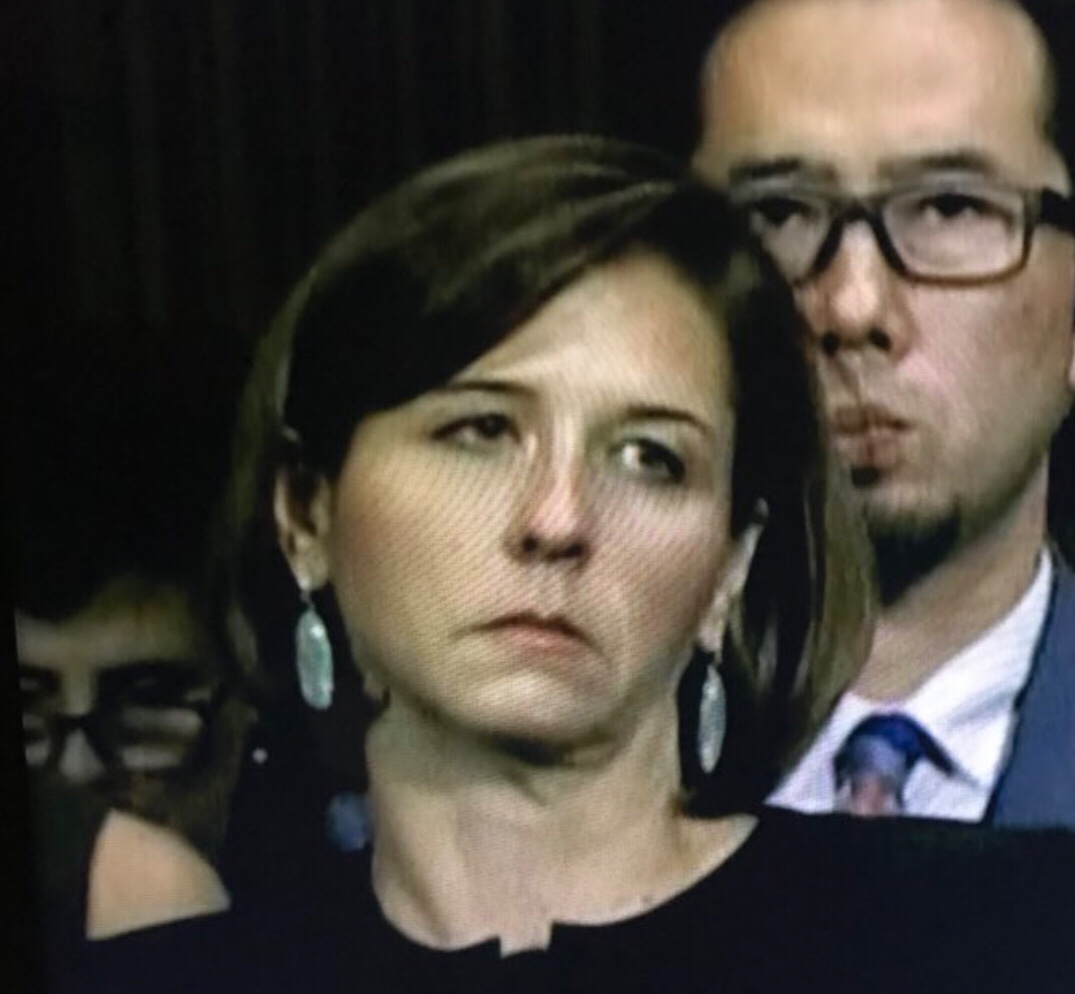 When he bragged about hiring only female assistants, as if this made him a champion for feminism, his wife shifted in her seat. What exactly her expression meant is debatable… it was either sympathy or scorn. I give it a year… their marriage.

It seemed like a missed opportunity to me when no one asked him about the report that “he has someone groom his assistants,” and “there’s a reason they all look like models.”

The Republican’s “assistant” Ms. Mitchel (prosecutor with a vagina,) began questioning Kavanaugh as she had done Dr Ford. One of the last questions they allowed her to ask, before they cut her off, was regarding his calendar. (He brought his calendar from 1982.)

July 1… that’s the date. All the names Dr Ford said were at the gathering were named there. The Washington Post wrote about it, so it’s not just me. “Going for (brew)skis w/Judge, Tom, PJ, Bernie, Squij?” 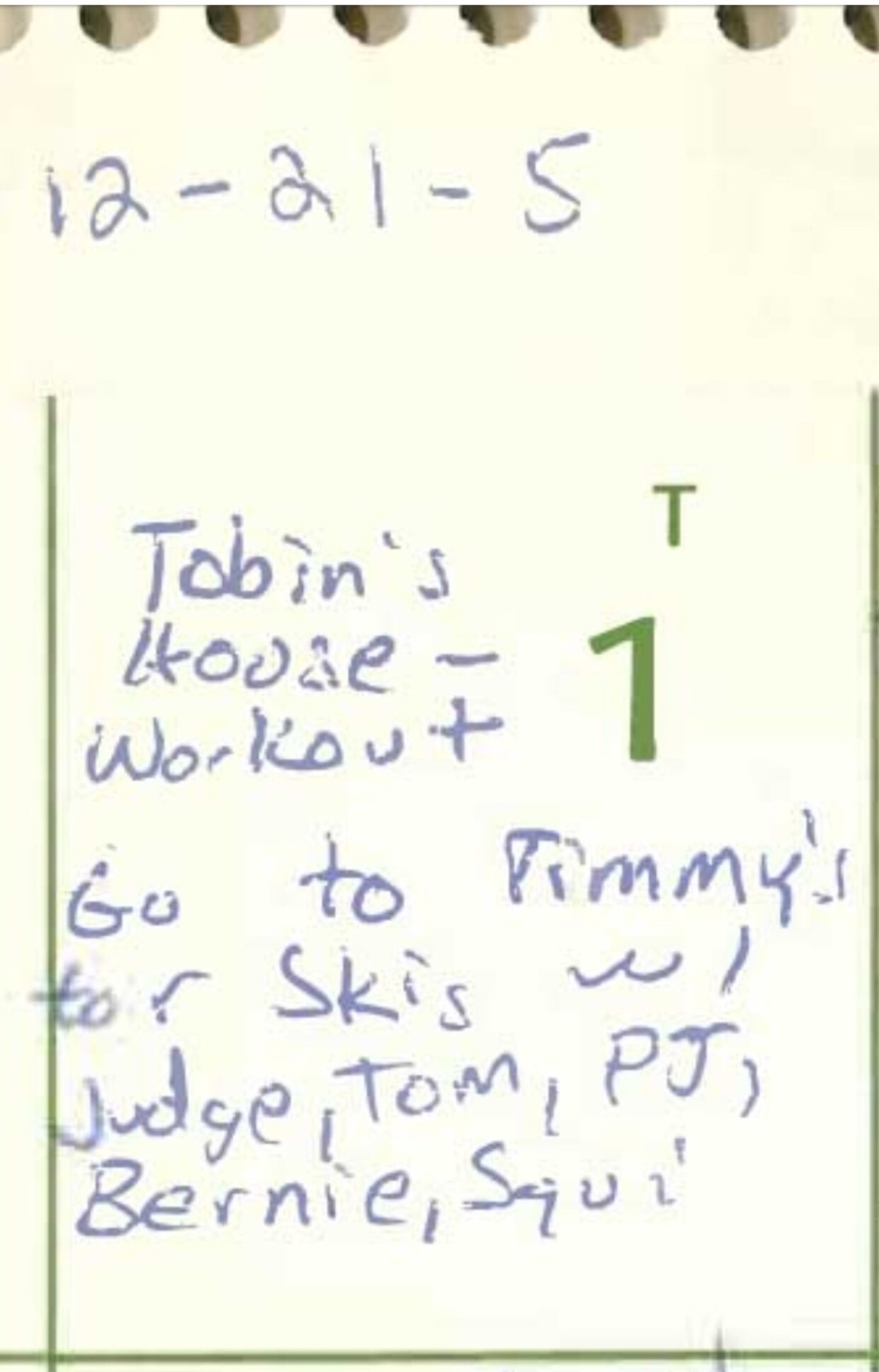 When the GOP assistant focused on July 1 and the names listed, she was pulled from questioning.

She had drawn attention to RapeyK’s Achilles heel. His damn calendar that he was so happy to show because it proved his innocence will be his downfall.

So the big boys took over. Senator Lindsey Graham’s monologue was over the top, but it’s the kind of academy award winning performance that worked for Pacino in “In Justice for All.” **Excellent clip.👇🏼

Shouting and pointing at the shameful behavior on the Democrat’s side.

Then Senator Blumenthal, who said Trump is complicit in this coverup, spoke Latin:

“You know what that means Judge Kavanaugh…”

If a witness is shown knowingly to have testified falsely about any material matter, you have a right to distrust such witness’ other testimony and you may reject all the testimony of that witness…

Kavanaugh is a liar… a frequent liar.

I expected fireworks during Senator Kamala Harris’ questioning. Granted, by the time it was her turn, Kavanaugh’s ploy was clear. He’d interrupt the Democrats in the middle of their first question, and wax eloquent on the points in his 45 minute long opening statement: how hard he’s worked, his qualifications, and no one at the gathering during which Ford was assaulted, remembers anything about it, or him. And then their allotted 5 minutes was up.

As Harris’ time was running out she asked him one last question, almost dismissively: “Judge Kavanaugh, Did you watch Dr Ford testify?”

“No. I haven’t watched it, I was preparing to testify, but I will, I plan to watch it.”

There is video footage of Kavanaugh watching Ford’s testimony.

When Kavanaugh’s yearbook was mentioned, Kavanaugh shouted that his yearbook was 35 years old, but if you want to bring out the year book go ahead. (I’m paraphrasing)

Orin Hatch said: “From his High School!” “From his teenaged years!”

The alleged assault took place at that time, so it is relevant. It is filled with sexual innuendo, misogyny, and tales of drinking.

When questioned about the meaning of some of the phrases… he lied.

Google the phrases for their meaning.

“Devil’s Triangle” is not a drinking game. It refers to a ménage toi.

The Wikipedia definition was changed immediately after he lied about the meaning… from someone in the building. Hmm… 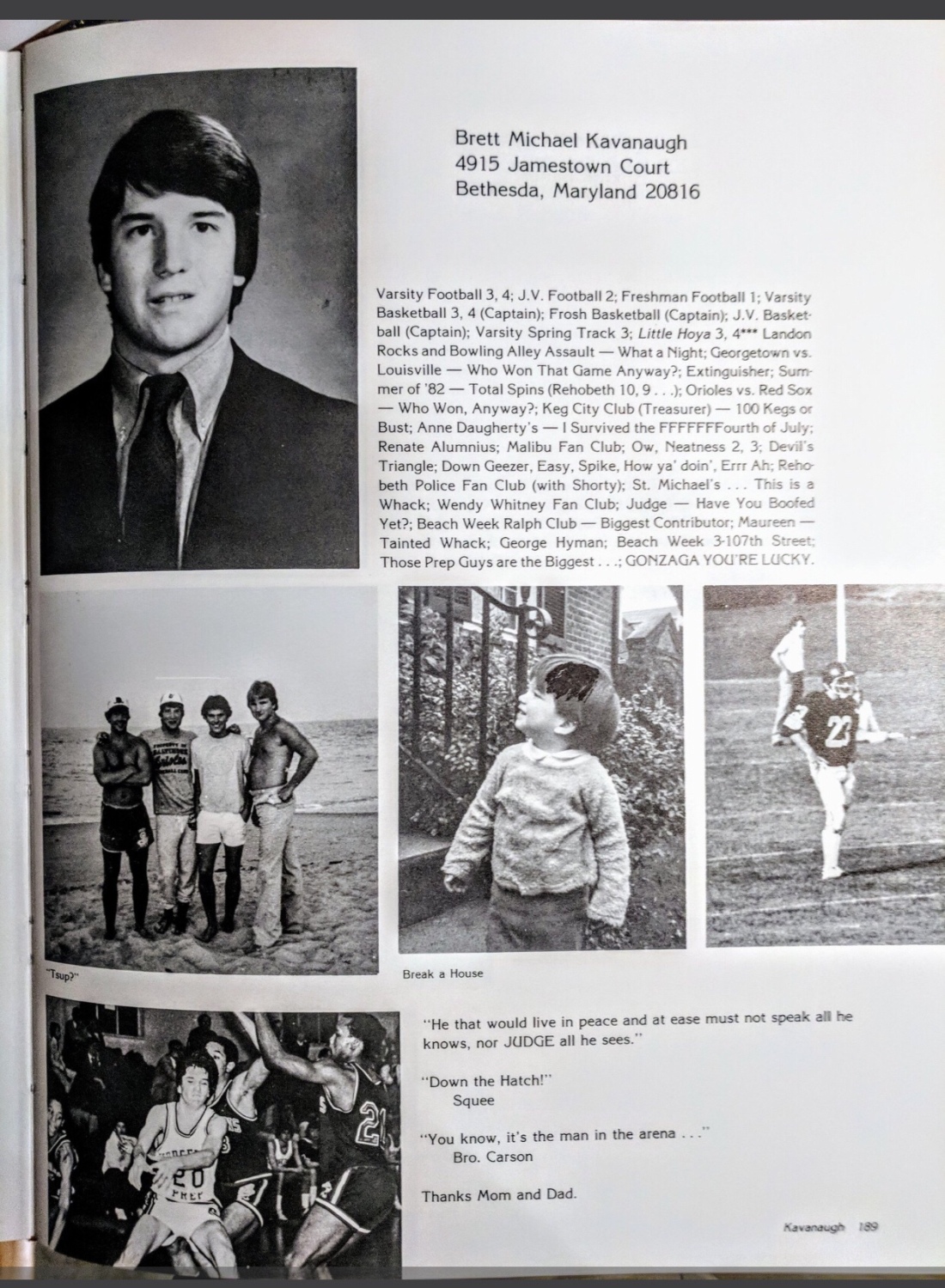 I believed her before I saw her testify and I still believe her.

Kavanaugh is somebody’s stooge. If you haven’t watched the documentary “Active Measures,” you should take the time. A clue might be when he accused the Democrats of seeking “revenge on behalf of the Clinton’s.” I think Kavanaugh had a bit of help with his speech.

It will give you an idea as to why Kavanaugh’s flaws make him a perfect Putin recruit.

The vote is today. I’d put my money on his confirmation.

Kavanaugh is pressed on the key July 1 entry in his calendar. But only to a point.