Unidentifiable armed groups of federal vigilantes, working on the order of Attorney General Bill Barr, are acting without the approval of local authorities in Portland. They do not follow the local police protocol, nor do they coordinate their efforts.

I’m not the first to wonder if this group has ties to Trump ally, former Navy Seal Erik Prince of Blackwater, a company that leases out thugs as private security. Prince is the brother to Betsy (destroyer of education) Devos. It’s a tangled web Trump has woven.

These tactics are only motivating more demonstrators to join protests.

Late last night the Portland Police Association Building in North Portland burned while protesters clashed with men wearing camouflage and riot gear, but no ID. The fire is said to have been started by these federal agents in order to give them cause to declare a riot, giving them legal justification to use violence against protesters.

Portland is under occupation by Trump’s secret police, and this should be the top story in the news. We are witnessing unauthorized and unnecessary use of a private army directed to fight American citizens. 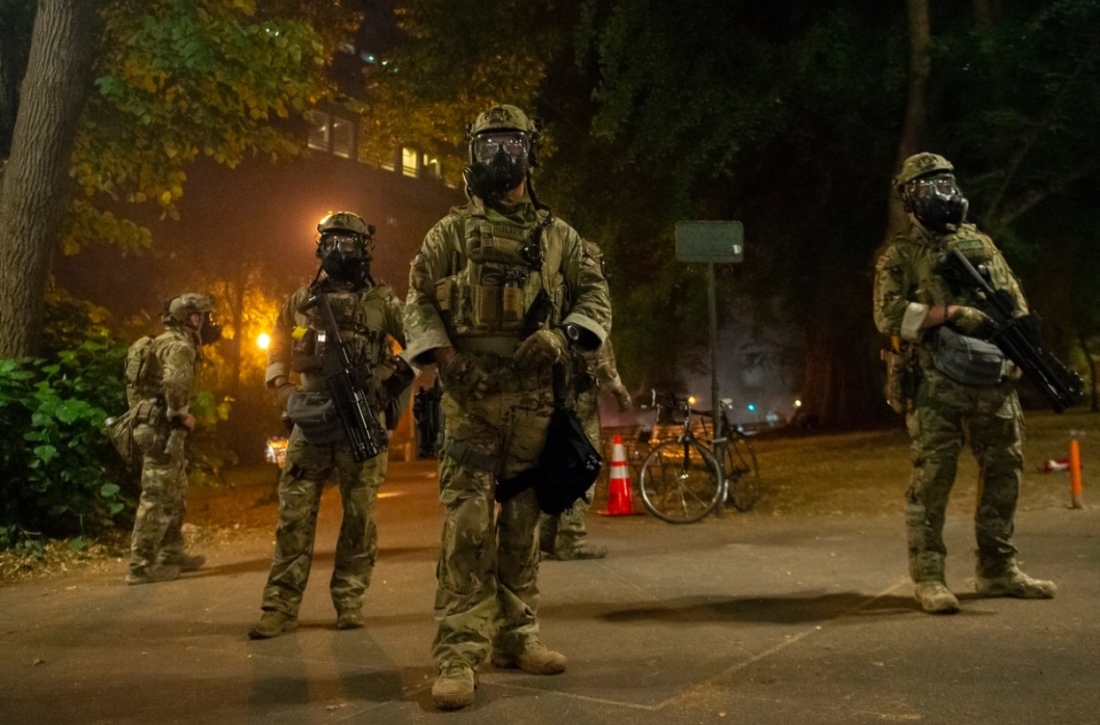 These are the same heavily armed federal vigilantes, who cleared Lafayette park for Trump’s biblical photo-op. They have been driving through the streets of Portland after dark in rented mini-vans, kidnapping random people, without explanation of who they are, what they’re doing, where they’re taking their captives, or why. No one is read their rights.

I can’t help but think of Eddie Gallagher, the Navy Seal war criminal who Trump pardoned. Is he among these men? Trump doesn’t do anything without expecting a favor in return. 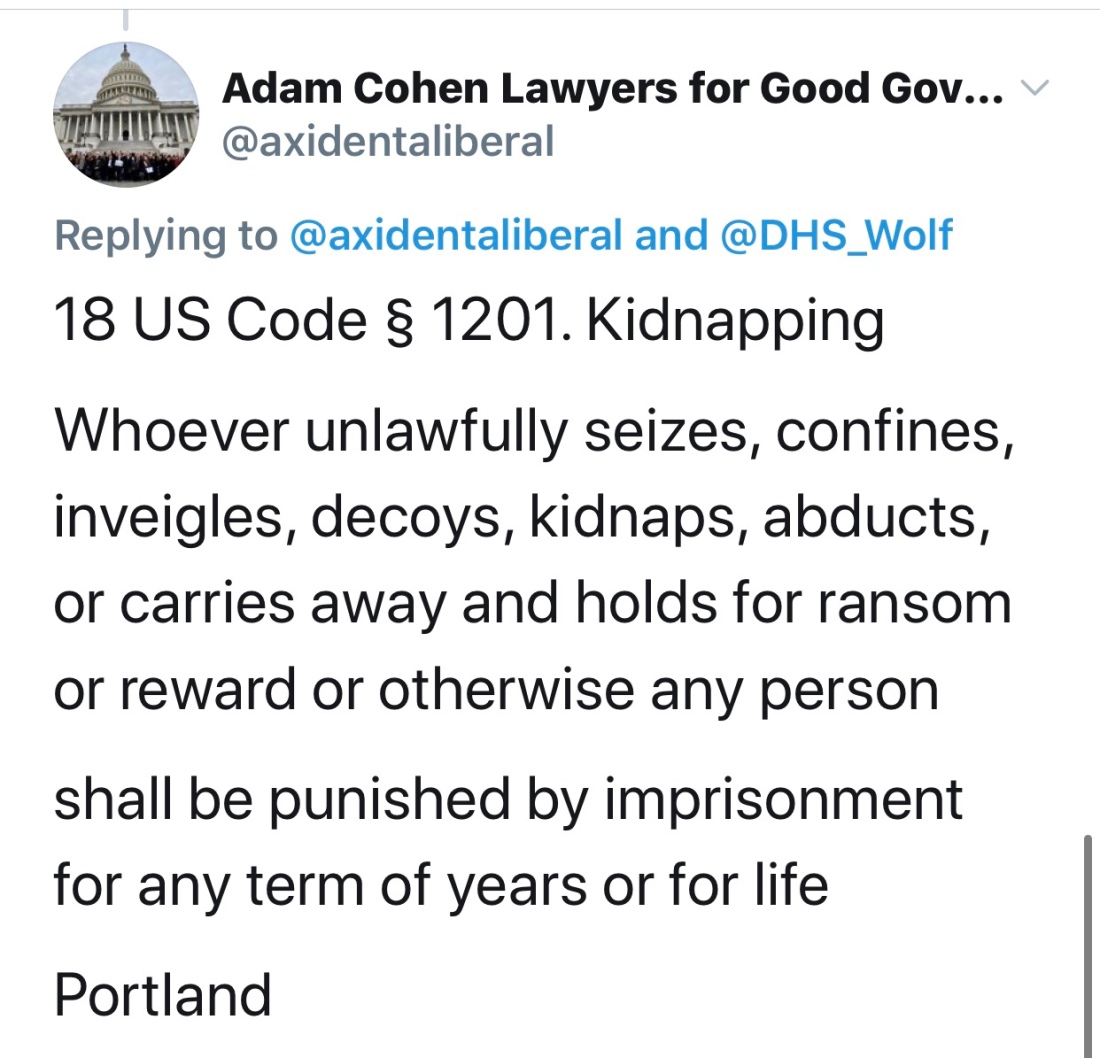 This use of private military by an authoritarian leader to instill fear among the masses is unoriginal. Hair Trump is following Hitler’s example.

Wikipedia’s simplified definition: “The Geheime Staatspolizei, abbreviated Gestapo, was the official secret police of Nazi Germany and German-occupied Europe. The force was created by Hermann Göring in 1933 by combining the various security police agencies of Prussia into one organization.”

This mob of hired goons has taken to the streets in large numbers with tear gas, batons, and shooting projectiles, attacking protesters who are within their legal rights. The federal government is claiming them as their own, which means we are paying for them with our tax dollars. This administration is using federal funds on outsourced lawless security troops who randomly harass Portland citizens, not only compromising their First Amendment right to demonstrate but threatening their civil liberties.

Portland is experiencing the most brazen advance toward totalitarianism that Trump has made to date, and it may be a practice run for more nefarious acts planned in the future. The idea that Trump has secret police in place days just 107 days before the presidential election, an election polls show him trailing by double digits, is alarming.

Is Trump acting on advice from his mentor? This is a tactic Putin uses to stay in power despite the will of the Russian people.

C19 data is no longer sent to the Center for Disease Control, the agency that kept track of numbers of new infections and related deaths. They have also been forbidden from voicing an opinion on the safety of Trump’s push to reopen schools. The administration continues efforts to slow testing, and has made attempts to discredit doctors and scientists who contradict Trump.

Trump has yet to comment on the threat of Russian bounties on American soldiers, despite payouts to Afghans for 20 murders. 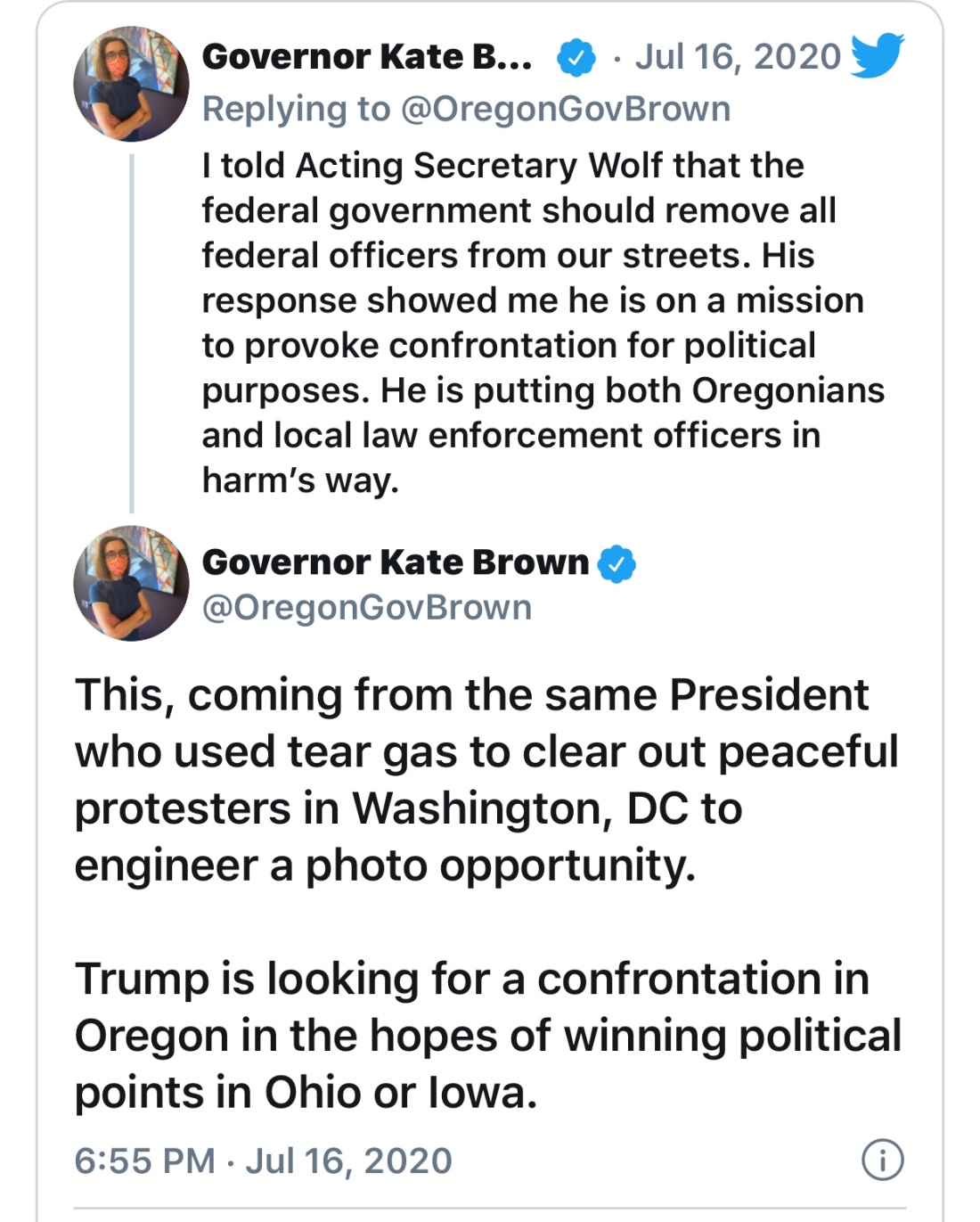 The city of Portland has filed a lawsuit to stop Trump and Barr’s federal agents from arresting it’s citizens, saying they are acting “under their own supervision and direction.”

On Thursday night Chad Wolf, the head of Homeland Security, said he “offered law enforcement assistance” to the mayor and local leaders but he was told to pack up and go home, to which he replied, “is just not going to happen on my watch.” His watch is that of an official who was illegally appointed by Trump over a year ago, never confirmed by Congress. So it’s not really his watch.

Wolf calls protesters “violent anarchists.” Their crime is graffiti, and the culprits of said graffiti are not the same people plucked from city streets. Despite his illegitimacy, Wolf is experienced in the act of kidnapping, having worked as Chief of Staff for the Border Patrol after Kirstjen Nielsen departed. He remorselessly separated families, adopting out and “losing” hundreds if not thousands of children.

Wolf accuses local leaders of “fostering an environment that continues to breed this type of lawlessness.” (Again, graffiti which cost $5,000 to clean up.)

Another “acting” official, Deputy Secretary Director of the Department of Homeland Security Ken Cuccinelli confirms that federal guards not leaving Portland, and they’re expanding nationally. They plan to infiltrate cities across the country, where protests have become a daily occurrence since the police murder of George Floyd in Minneapolis.

Incompetence and indifference are to blame for the 3,660,300 Americans infected with C19 and the 139,186 dead. – Trump has never expressed condolences.

There is no bigger story then what is unfolding in Portland. This may be a precursor for a militia style takeover of our cities sanctioned by Trump campaign. Do not underestimate the danger here. Is Trump is planning to shut down the election?

Call your congressional representatives at 202-224-3121. demand the secret police be dismantled.

This is happening on the streets of our hometown of Portland, OR.

We will continue to resist. They are fucking with the wrong city 👊#TheResistance