In desperation, caused by imminent impeachment, the stable genius has been rendered less so. So unstable has the remedial genius-in-chief become, that he has resorted to firing off over 100 tweets in a single day, bemoaning how unfair democracy is to would-be dictators like him, and cyberbullying a 16-year-old girl.

Elijah Cummings improved on that mantra when he said: “We are better than that!”

I miss normal. I miss integrity and goodness. I miss not being terrified of the future.

Impeachment has been a long time coming, but I won’t allow myself to be overly confident that this is a done deal. Party lines may not reflect precisely how Wednesday’s vote will transpire, and to underscore that point, the Democratic party has a defector.

A representative from the 2nd Congressional District in New Jersey, Jeff Van Drew, met with tRump on Friday, and then on Saturday, shared the news with Democratic officials that he will soon announce his plans to change parties. The soon to be Republican, Van Drew voted against opening the impeachment inquiry in October, saying it was too divisive, and he has made clear he will vote “no” on Wednesday.

A poll of Van Drew’s constituents, conducted earlier this month, shows the freshman congressman is not likely to win re-election. Only 28 percent of the Democratic respondents said Van Drew “deserves to be re-nominated.” So, what’s a little presidential quid pro quo gonna hurt?

Let’s assume the House impeachment is successful. The vote to remove the Russian asshat moves to the Senate, where the GOP still has a majority. Senate Judiciary Chairman, Republican Lindsey Graham from South Carolina, who behaves like a hostage under duress, has announced that he will not uphold his constitutional duty by holding a fair impeachment trial in the Senate—

I’ll repeat this because it’s crazy town on steroids. Graham has announced to the media that he will not uphold his constitutional duty by holding a fair impeachment trial in the Senate—

“I am trying to give a pretty clear signal I have made up my mind. I’m not trying to pretend to be a fair juror here.” ~Lindsey Graham

“This thing will come to the Senate, and it will die quickly, and I will do everything I can to make it die quickly” ~Lindsey Graham

Not enough proof that our Democracy may not survive this administration? 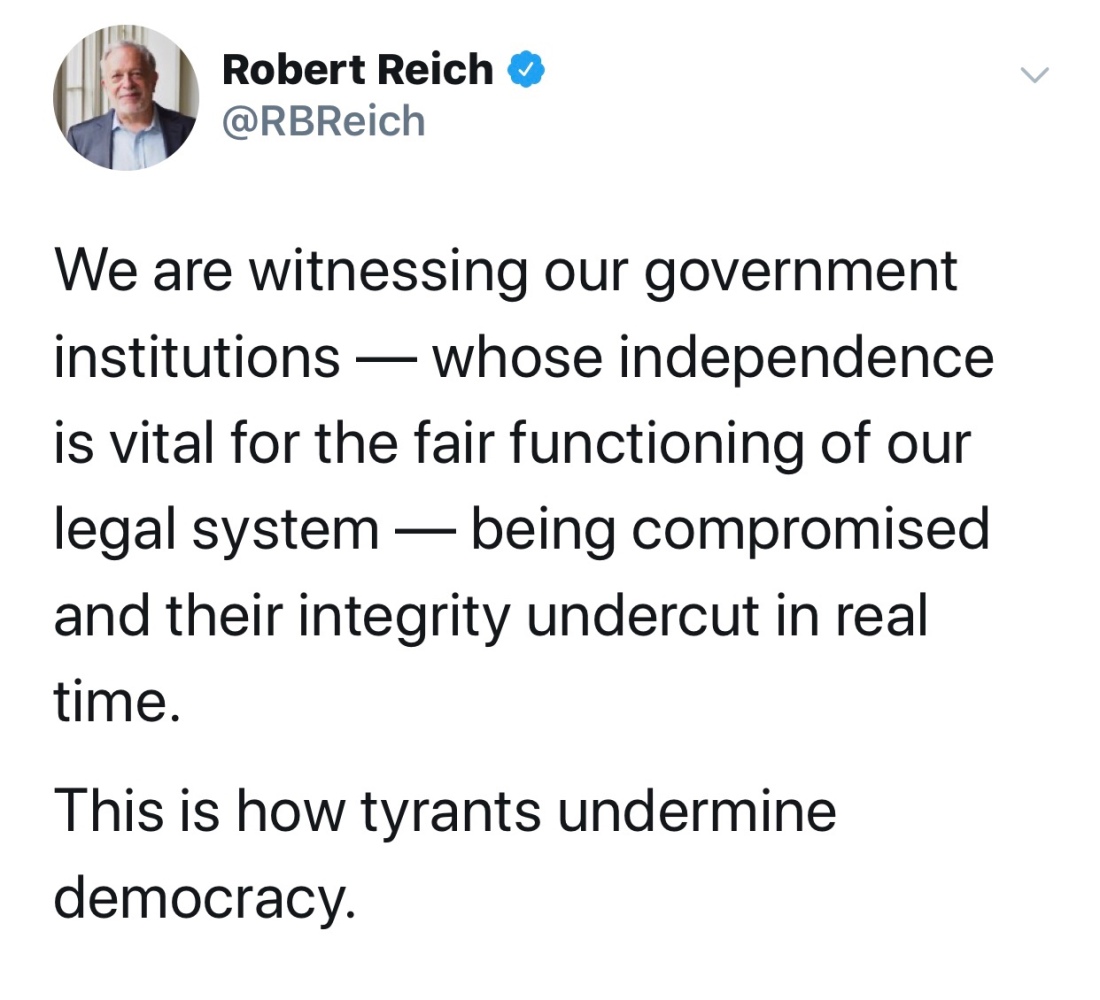 Senate Majority leader, Moscow-Mitch McConnell, has also publicly vowed to undermine proceedings. He says he will work in tandem with tRump and the White House on the impeachment once the House passes it on.

“Everything I do during this, I’m coordinating with White House Counsel. There will be no difference between the President’s position and our position as to how to handle this.” ~Moscow Mitch McConnell

This is an admission in advance that he will not uphold the vow he has taken with each of his seven re-elections. Don’t take my word for it:

“To basically admit before you start the trial that it’s rigged is just quite astonishing.” – Norm Ornstein, political scientist, on Sen. McConnell’s statement

Calls for McConnell to recuse himself are loud and clear, but really, he’s not going to do the right thing ever. He is in a position to undercut our democracy, and he will make tRump’s dictatorship a reality because he is under financial obligation to Putin’s henchmen.

What about the courts, you ask? McConnell has approximately 400 bills sitting on his desk, ignored because they were written by a Democratic majority House, but ignoring those bills has freed up his time, which he has used to pack the courts with pro-tRump, unethical judges, many deemed “unqualified by the American Bar Association.

The Democratic party is fighting fire with integrity, and a squirt gun, hoping that fire will burn itself out. The advice they offer to concerned Americans is to vote in 2020.

Our only legal recourse is to vote in 2020? Don’t get me wrong; we ALL must vote. But will those votes count? Among the 400 bills clenched in the hands of a traitor, Moscow Mitch are three that would help secure our elections.

How can we feel confident that this lawlessness will be resolved?

“Make yourself sheep, and the wolves will eat you.” ~Benjamin Franklin

This is a turning point in history, and I’d venture to say half of the American population is so disengaged from political news, that they still have no idea what is happening in Washington regarding impeachment. There is no excuse for ignorance at this point. Again, the final House vote is scheduled for this Wednesday.

Show congress that you are paying attention. Join a rally near you. They’ve already been organized across the country to be held this Tuesday. Text 21333 with your zip-code, and they’ll respond with the location of the March nearest you. Make signs, make your voice heard, grab friends, and hit the streets. Our future depends on it.

Get Ready to Rally for Impeachment

House Democrat calls on McConnell to recuse himself from impeachment trial

Ornstein: McConnell’s admission is ‘a flat violation of the oath he will take as a juror’

‘I’m not trying to pretend to be a fair juror here’: Graham predicts Trump impeachment will ‘die quickly’ in Senate