I have a few unoriginal thoughts on John McCain. I’m sure others have expressed them all, much more eloquently than I will, but this what I choose to write about. Not sorry- my blog.

You have heard, I’m sure, John McCain’s funeral was today. I was not his biggest fan, but I believe he was a great man.

My problem with McCain was his habit of political duplicity. He often said exactly what my liberal ears wanted to hear, but then voted with the GOP.

Regardless of that, McCain was a war hero who endured years of torture while held prisoner in Hanoi.

Decades later he had the integrity to admit his regret at having supported another war, the Iraq War.

He also he did a few things in the course of his career that I respected regardless of his political views.

John McCain redeemed himself to me when he returned to the Senate floor, while undergoing cancer treatments, for the sole purpose of casting the deciding vote against the GOP’s plan to decimate American health care.

His true character was also revealed in 2008 when at a campaign rally, during his run for president against Barack Obama, he defended Obama to a pair of xenophobes in the audience. McCain took the microphone away from a woman as soon as he understood where she was going with her question.

Today, during his eulogy for McCain, President Obama mentioned the incident and said he was grateful McCain had defended him, but he was not surprised.

In contrast, if that were to happen at a Trump rally today, the woman’s fears would be exploited, the man’s racism encouraged and hatred in the crowd fueled. We’ve seen it time and time again.

The funeral today had a mix of controversial figures, and the usual suspects. Mitch McConnell was stone faced as his wife, Elaine Chao, checked her watch and picked her fingernails. Paul Ryan sat behind them… and well just being Paul Ryan is bad.

George W Bush brought snacks and shared with Michelle, while the Clintons and Al Gore went hungry. Dick Cheney and Henry Kissinger were also in attendance.

Jarvank Kushners were present, whether they crashed the services or were there by invitation remains to be seen. Ivanka appeared to be texting. Donald Trump and McCain’s former running mate, Sarah Palin, were both told to stay home.

“The president asked me to be here, on behalf of a grateful nation, to pay a debt of honor and respect to a man who served his country throughout his life.” ~Pence

Trump was excluded from the services, not only because he’s a traitor, but because of his disparaging remarks regarding McCain—

“McCain was not a war hero. He’s a war hero because he was captured. I like people that weren’t captured.” ~Donald J Trump

While McCain was tortured in Hanoi, Trump avoided the draft five times citing bone spurs. He also said he “was a brave soldier trying to avoid std’s.”

“In the McCain’s family, national service was it’s own reward.” ~Henry Kissinger

I am not afraid to say I was surprised to see Henry Kissinger at the funeral. I thought he was dead. He’s not. A very brief bio for the curiously disinterested:

Kissinger’s family, Jewish refugees, fled Nazi Germany in 1938. During his life he has been Secretary of State, and a National Security Advisor for Nixon and Ford. He was a recipient of the 1973 Nobel Peace Prize, for ending U.S. involvement in North Vietnam, although he returned it after the ceasefire failed.

He is reviled by many who believe he intentionally broke down peace talks in 1968 in order to extend the war, which resulted in thousands of more deaths, both American and Vietnamese, for the sole purpose of helping Richard Nixon get elected.

Today Kissinger is 95, still lucid, and an eloquent orator. His history with McCain goes back to his days as a prisoner in Hanoi. At the funeral today Kissinger said he had the opportunity to rescue John McCain near the end of his captivity, but refused, and McCain later thanked him for not taking away his honor. McCain had, years earlier, refused to be released without his fellow prisoners.

“We never doubted… when all was said and done, we were on the same team.” ~Barack Obama

Barack Obama we all know as the last real President who we realize we didn’t appreciate enough. 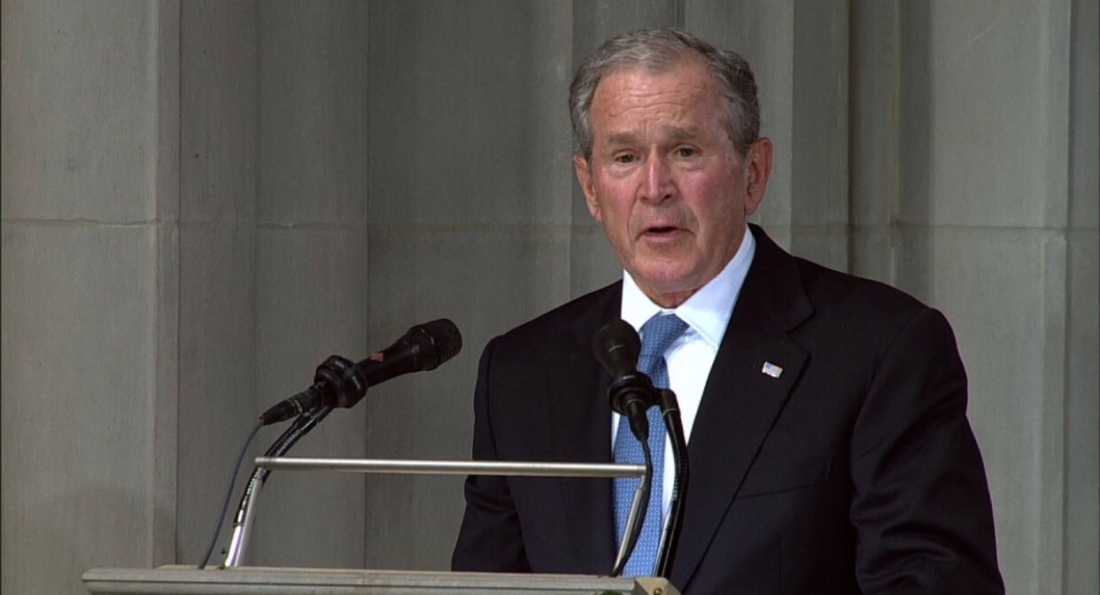 “Above all, John detested the abuse of power. He could not abide bigots and swaggering despots.” ~George W Bush

I never in my life imagined I’d quote George W Bush unless it was to mock him. I hated didn’t like him when he was POTUS. Although I think his VP was the brains in that operation, he started a war for oil and that is unforgivable.

Regardless, today I’m quoting him… twice, because he’s a better ex president than president.

“If we’re ever tempted to forget who we are, grow weary of our cause, John’s voice will come as a whisper over our shoulder. We are better than this. America is better than this.” — George W Bush

“The America of John McCain has no need to be made great again because America was always great.” ~Megan McCain

The most memorable eulogy was from John McCains daughter, Megan. Have a box of Kleenex handy if you watch—