Facts are truths that exist in reality. We gather facts by observation, experience, or research compiled from multiple sources. Facts are not a liberal hoax. Facts are non-partisan.

Here is a fact: Bill Barr’s time ran out on Friday. He has defiantly taken the stance that he alone, on behalf of Trump, decides what is law, and he alone decides how to interpret former Special Counsel Robert Mueller’s work; for him subpoenas and court orders are irrelevant. Wouldn’t it be nice to have the kind of irrevocable, and all encompassing power Bill Barr thinks he has?

I’ve been working on this post since Friday. This morning it was 4000 words. 4000 of the same words rearanged a bit to make the same point again and again. I am so tired of the bad guys prevailing. Not to worry, I’ve edited with a heavy hand.

On Thursday former Special Counsel Robert Mueller had a press conference. To me he seemed troubled, stumbling over his words on occasion. He was angry, and with good reason. Bill Barr has been undermining his work, willfully misinterpreting it to suit Trump, and trying to discredit him. I wouldn’t be surprised to find out Barr told Mueller to wrap up the investigation. Barr was confirmed on February 14, and had the report hidden under his ass on March 22.

Barr is on a press junket, doing damage control, for the press conference Mueller held on Thursday. Mueller was clear: he was not allowed to indict a sitting president, he wanted his report turned over to Congress so they could do their jobs, and Trump is not innocent.

If you can’t indict a sitting president, what do you do with a traitor in the White House?

Barr keeps saying: ”he did not reach a conclusion.” Mueller did. He presented many impeachable conclusions, at least 11 instances of obstruction, and recommended Congress take action.

There may have been enough conspiracy evidence against Trump, if not for his successful obstruction: witnesses invoking their Fifth Amendment rights, providing false or partial information, and destroying evidence, sometimes on Trump’s orders, sometimes not.

The Mueller report states that Trump’s presidency saved him from indictment for his crimes, based on a long-standing DOJ policy that an acting president cannot be indicted. Trump is protected by an office he stole. Isn’t that is ironic? He remains free from charges because he successfully broke the law.

Mueller would have been in violation whatever he did unless he concluded that Trump was innocent.

I don’t want to repeat my last two posts, but this bears repeating: over 1000 former federal prosecutors, both Democratic and Republican concluded the actions Mueller describes in his report would have resulted in the indictment of Trump if he were not protected by the presidency.

Barr has a history of covering up political crimes that goes back as far as the Reagan administration. He’s been preparing for this his whole life. He wrote the following 19-page memo, job application, claiming Trump could not be indicted. He wrote it back in June of 2018, again, he was not confirmed until 2/14/2019.

Where are we now?

Barr is still obstructing justice. He has been withholding information that Congress has been entitled to since March 22.

The House Judiciary Committee subpoenaed Barr to testify, and when he declined he was warned he’d be held in contempt. When Congress was to meet to decide Barr’s punishment, he cried uncle, negotiating to turn over the materials that Congress had requested if they ixnayed on contempt day. Congress gave him a week to turn over evidence from the Mueller report, and an unredacted copy. The clock ran out on Friday.

Barr missed another deadline on Friday, this one set by Federal Judge Sullivan, who ordered the Department of Justice to make Mike Flynn’s call to Russian ambassador Sergey Kislyak public.

Barr said that what the judge demanded wasn’t relevant to his job.

Judge Sullivan has a reputation, and Barr may have pushed the wrong judge too far. Judge Sullivan wanted Bob Mueller to impose a harsher sentence on Flynn. Hopefully he’ll send Federal Marshalls to the Department of Justic to collect on the court order and grab Barr while they’re at it, so he can start serving his five-year sentence for Contempt of Congress.

Barr has been giving televised interviews:

“We didn’t agree with the legal analysis. It did not reflect the views of the department. It was the views of a particular lawyer or lawyers, and so we applied what we thought was the right law.” ~ Attorney General Bill re-Mueller’s report

Barr’s interview shed light on some new offenses he committed. As Attorney General, he was required to proceed as follows:

He violated Department of Justice rules by not disclosing his decision to abrogate and nullify the Mueller report.

The letter Barr submitted to Congress back on March 22, 2019 stated “there were no such instances” where he disagreed, overruled, or blocked Mueller. 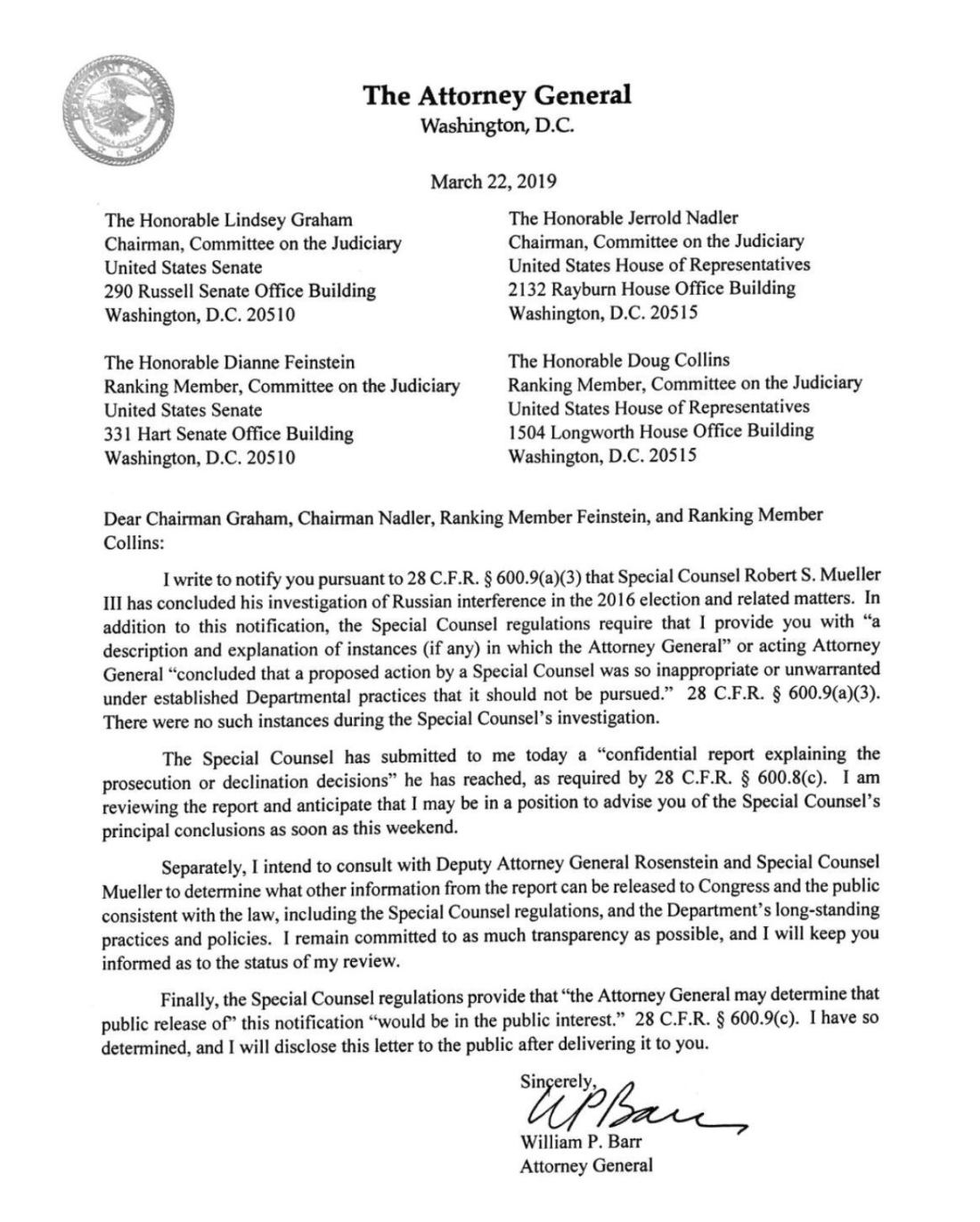 Congress must sentence Barr for contempt, as per the regulations of his own department, he has an obligation to answer to the House Judiciary Committee. Barr is refusing to comply with the law, and if this isn’t dealt with swiftly Congress will no longer be seen as a co-equal branch of government.

During one interview William Barr was asked about the prospect of leaving behind a tarnished legacy:

“Everyone dies, and I don’t believe in the Homeric idea that immortality comes by having odes sung about you over the centuries…” Bill Barr

Translation: I don’t care what happens to America, because I’m old and won’t have to live with the consequences.”

It was just another week in Trump pergatory.

Republican group to hand-deliver Mueller report to every GOP lawmaker

5 thoughts on “Another Week in Trump Pergatory”