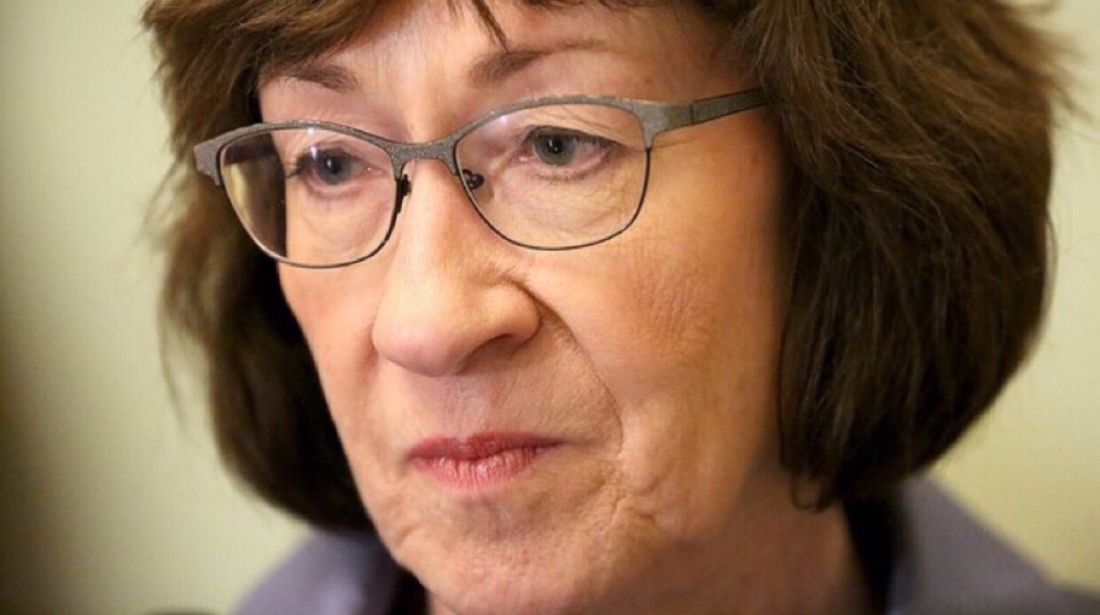 I am directing my anger today at Senator Susan Collins (R/ME), however it could easily be transferred to one of a number of equally deserving Senators.

“We… ya know… I tell you what, I happen to know some United States Senators, one who is on the other side who is pretty aggressive. I’ve seen that person in very bad situations… okay? I’ve seen that person in very very bad situations, somewhat compromising, and you know— and I think it’s very unfair to bring up things like this. However, whatever the senators want is okay with me.” ~Donald Trump, October 1, 2018

I could be aiming my fury at the Democrat who Trump so effectively blackmailed ON CAMERA this week, (Are you there mainstream media, it’s me, Lydia) the ‘amominush’ Senator he threatened to expose… If only I could figure out who he meant. 🤔

(Or) I could direct today’s rant at the only Democrat who turned coat to vote “aye” with the Republicans, Senator Joe Manchin (D/WV).

(Manchin is father of the equally despicable CEO for Mylar Pharmaceuticals, Heather Bresch, the woman who gave herself a 471% pay increase after increasing the price of the lifesaving EpiPen 461%.)

I could also go off on Flake, GrASSley, McConnell, Hatch, Kennedy, Trump…

I choose to focus on Senator Susan Collins for now. Why? Because clearly she wants the attention. This is her modus operandi. She feigns angst, and thoughtfulness. She would never admit to knowing how she was going to vote on day one. She waited until the last possible moment to show her cards.

I know a few others did that too, and although Collins is a fraud, so are all politicians. Why am I so angry at Susan Collins when there are 50 other Senators who voted in THE BLACKOUT DRUNK FRAT BOY RAPIST?

I am angry because Susan Collins played with victims of sexual assault, like a cat plays with a mouse before it kills it, then she sold out her own gender.

Collins held us hostage yesterday with empty hope. She gave a stellar performance on the senate floor yesterday. Her one woman show, her harridan harangue, that rapacious rant, a savage soliloquy, was all she wanted all along. She never intended to vote yes. NEVER. She wanted an audience.

Her diatribe was so long I forgot what Kavanaugh was … for a minute.

She never intended to vote no to the man who will decimate women’s rights, the rights of labor, healthcare, contraception, money in politics, voting rights, LGBT rights, climate change, grant unlimited executive power… 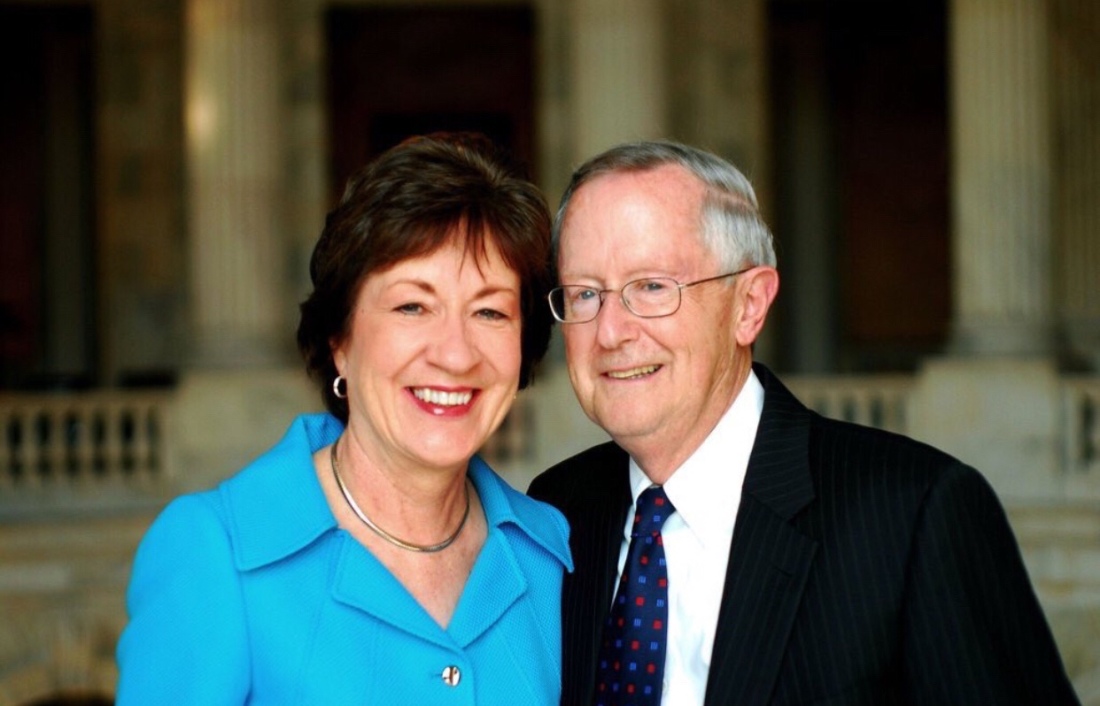 Why? I think her husband might have something to do with it. He is lobbyist Thomas Daffron of Jefferson Consulting Group. He is on the payroll of Russian oligarchs.

There is no question as to whether Senator Collins is compromised. Okay, so why can’t she be compromised and shut up like the rest of the GOP?

Collins is willing to look into they eyes of her constituents and nod, but she doesn’t hear them because, if you listen very carefully when she nods, you can hear the rubles clinking in her head. The clinking rubles have made it impossible for to hear the voices of those she works for.

(In reviewing and editing this post prior to publishing, I have reached the halfway point. This is a long post, reminding me that in order to hold a readers interest, a writer must “kill her babies.” Not literally, ‘babies’ is a metaphor for words. I must cut off this post here. Meh, fuck that.)

Senator Collins feigned her indecision, then she displayed her selective memory. Her argument might have been a good one if you didn’t know she was omitting the TRUTH of Kavanaugh’s flaws, or of the sham of an FBI investigation.

She selectively forgot Kavanaugh’s continued delay and denial of an immigrant teen who had been raped and wanted an abortion: Garza v Hargan. Kavanaugh attempted to block her from obtaining a lawful abortion. Two DDCOAs judges stepped in just before it would have been too late. 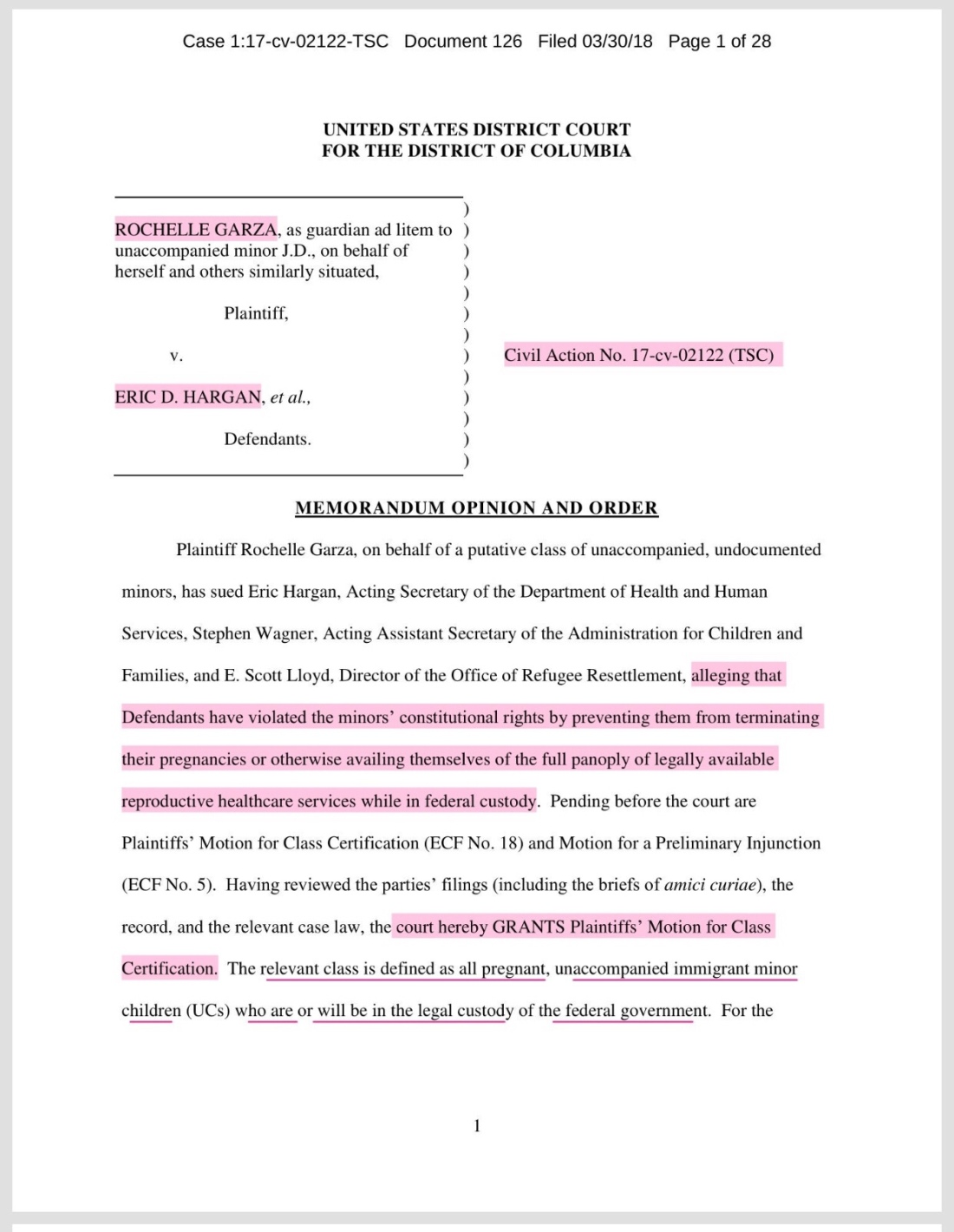 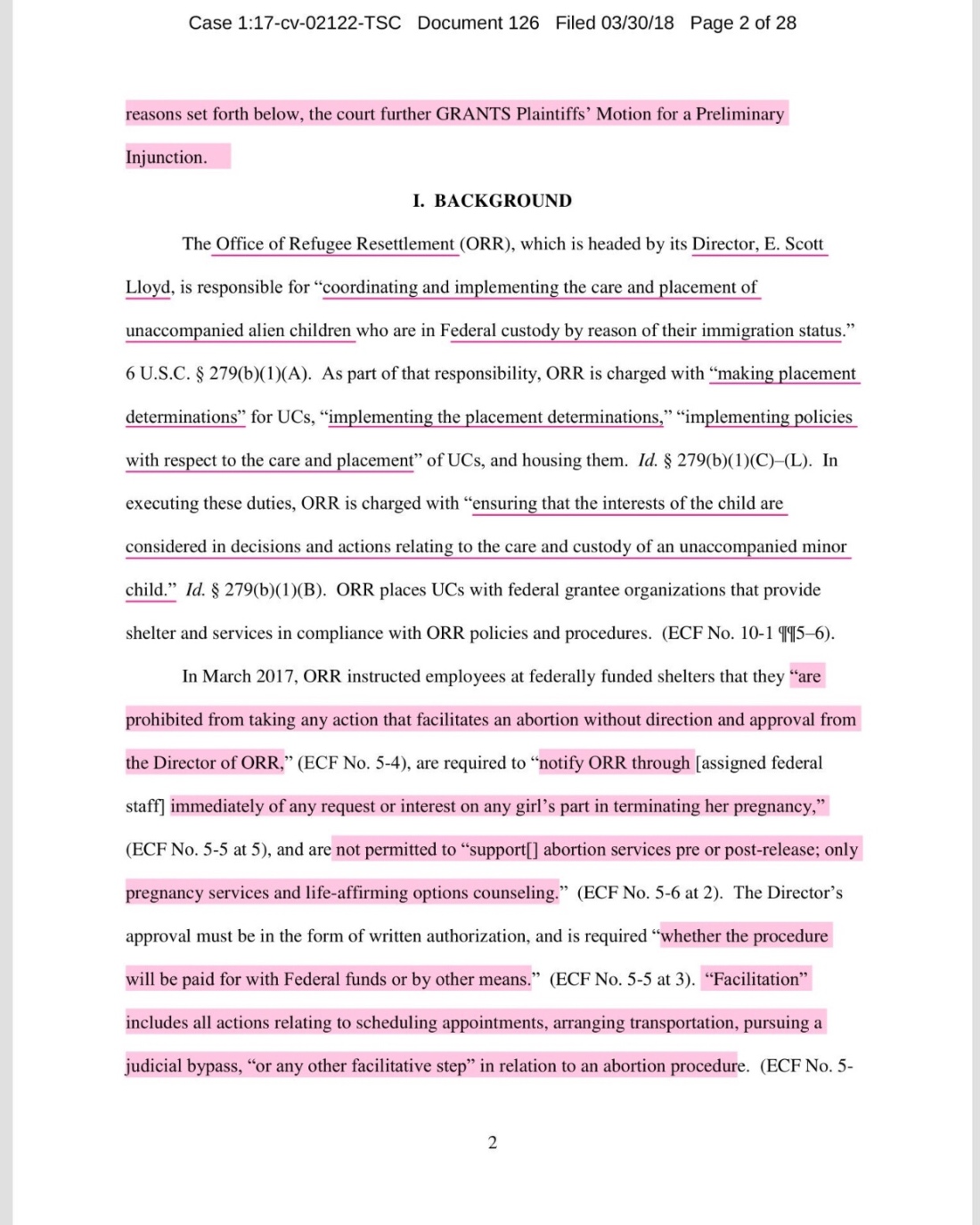 She ignored Kavanaugh’s lies under oath (a felony by any other name would smell as illegal). She forgot his bombastic behavior while he was questioned by the Democrats on the committee. She overlooked the 93% of his resume the GOP felt it needed to bury,

Susan Collins is condescendingly sorry for Dr Ford, but said there just “wasn’t enough evidence” to rob Kavanaugh of his Judicial robe.

Susan, how ya gonna see the evidence** with your eyes closed?

The following is a statement from Dr Blasey Ford’s attorneys: 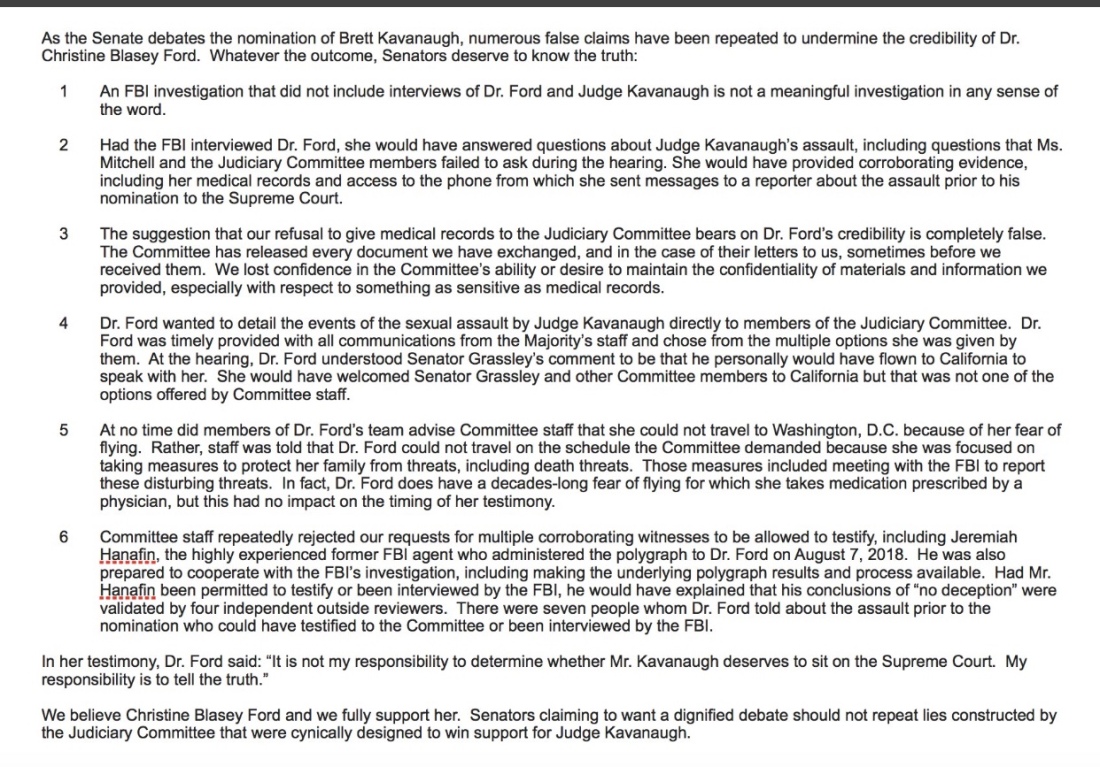 **The FBI was not allowed to find evidence. The 1600 pages of tips called into the FBI tip hotlines were ignored. This investigation ignored 3 eyewitnesses to sexual assault, 22 perjuries, 48 corroborating witnesses, 16 prior disclosures, and dozens of Kavanaugh’s classmates who called him a liar.

All the corroboration was essentially turned around and slapped on the ass before it was pushed away.

Forget the sexual assault for a minute if you can, and consider:

WHY DIDN’T ANYONE ASK HIM THOSE QUESTIONS? What happened to “due process?”

He lied about timing. When had he heard about Ramirez, his Yale classmate’s accusation? It was prior to Dr Ford coming forward.

I’ll spare a minute for Jeff Flake. He played the same game Collins played. He said he would vote no if it was clear Kavanaugh lied, he would vote no if the one week long FBI investigation was not thorough, and finally, he said unless “something big” happens, he’d be voting yes.

Kenneth Appold, was among the 48 witnesses who were ignored by the FBI. He is a respected Princeton Professor of Reformation History, and he wanted to tell the FBI that he learned of the Deborah Ramirez Yale incident with his suite mate Brett Kavanaugh the day it happened. 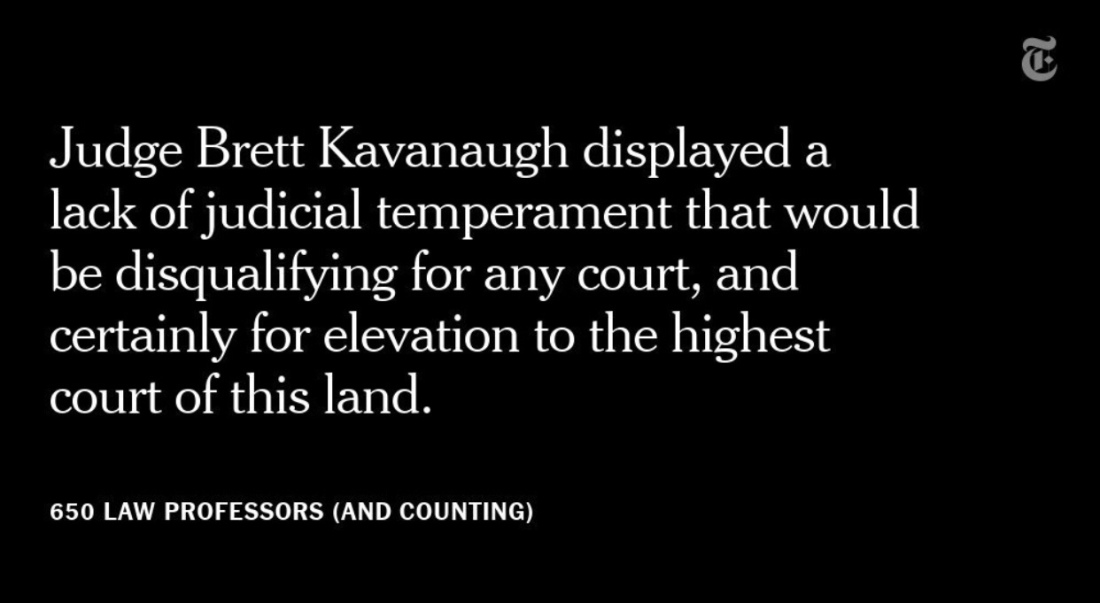 Groups who rejected Kavanaugh, and called for an FBI investigation that isn’t a SHAM:

Collins’ view of Kavanaugh, is in opposition to the widely held public opinion of him. He is a nominee without public support, nominated by a historically unpopular president, an un-indicted co-conspirator who lost the popular vote by 3 million.

In 2012, despite earning 1.4 million fewer votes, Republicans retained the U.S.House of Representatives, thanks to gerrymandering.

Kavanaugh is about to confirmed by a Senate majority who were gerrymandered into their seats, and who represent a manipulated minority of the country whose votes hold more weight than they ought.

The electoral fffffucking college, voter suppression, gerrymandering, and VOTER APATHY, are how we got here.

The majority has been minimized…

WE ALL NEED TO VOTE if we want to take our country back.

Susan Collins, who ALWAYS plays the undecided moderate Senator, is not a moderate. She’s a Republican through and through in Trump’s pocket. 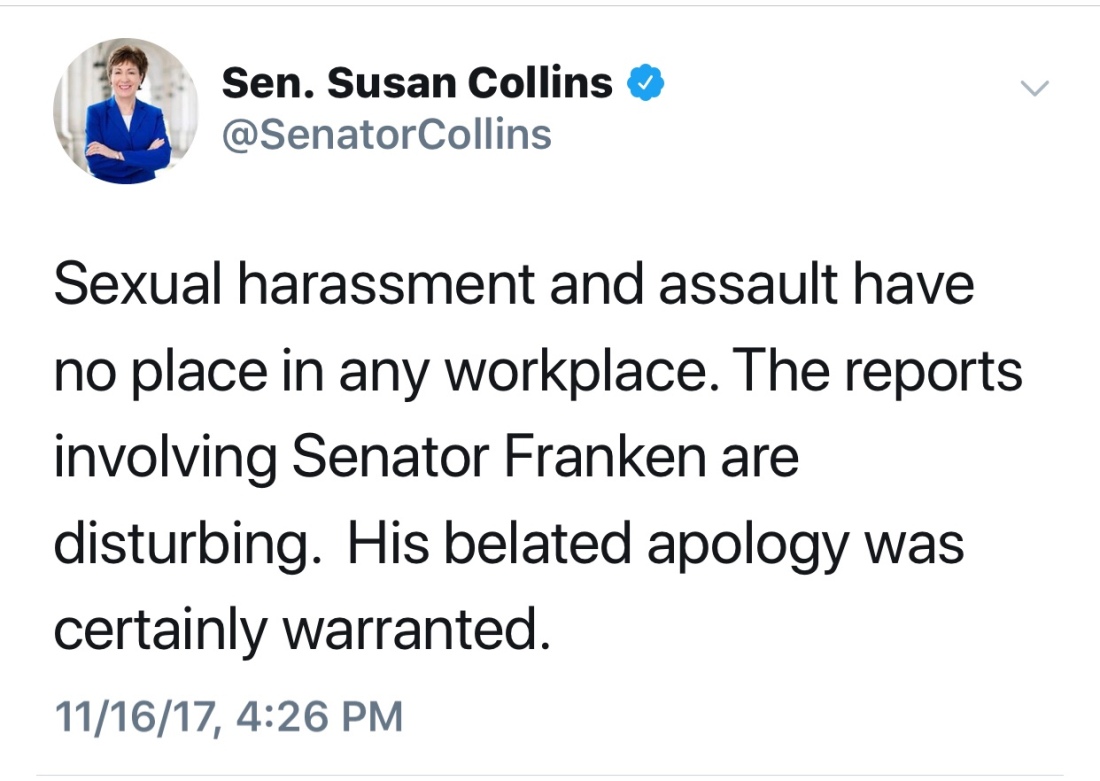 She called on Al Franken to resign without the “due process and presumption of innocence” that she has given Kavanaugh.

Thanks to you MS Collins, Donald Trump now has control of all three branches of government. How long do you think it will be before he ends the Mueller investigation and pardons all his criminal conspirators? You have crowned him King.