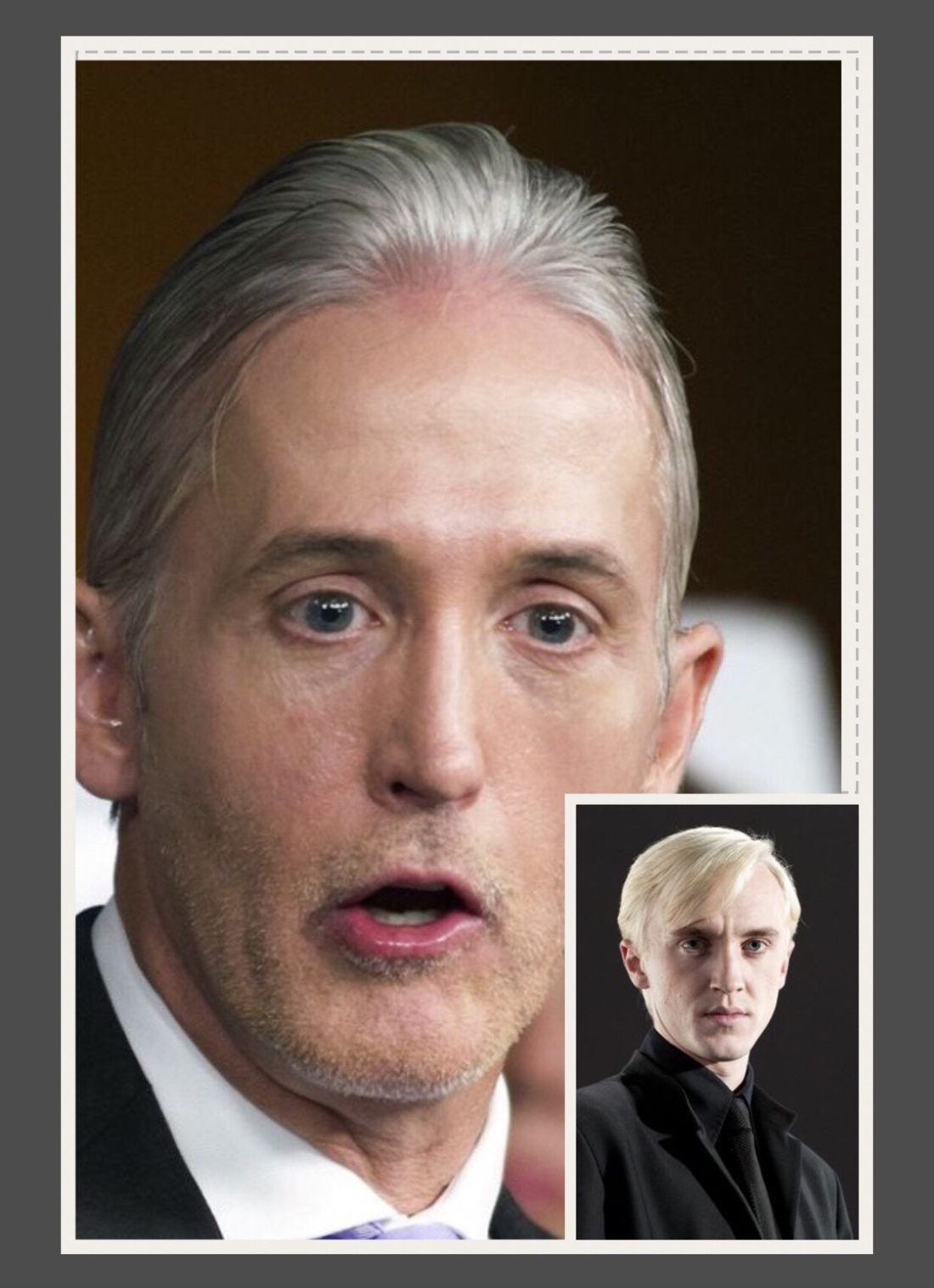 Based on a single sarcastic comment by a member of the FBI, a joke— “perhaps this is the first meeting of the ‘secret society,’”

Trey M (Malfoy) Gowdy R-South Carolina, Ron Johnson R-Wisconsin, Matt Gaetz R- Florida, and others in the GOP have made the rounds with FOX, CNN, and any MSM who will listen to their attempts to discredit Mueller, claiming existence of an FBI secret society determined to destroy Trump.

Let’s not forget Devin P (PleaseArrestMe)Nunes. Nunes claims to have information no one else has, but he will not show it. This reminds me of a press conference a few months back when someone, (hmm… Nunes?) said he had evidence proving former President Obama had indeed wired Trump Tower. That wasn’t true then, and this isn’t true now. Perhaps there need to be ethics investigations into Nunes, Gowdy, Johnson, and others who are in violation of DOJ agreement that the information, of said text messages, which were provided to Nunes, were not meant to be shared outside a few designated members of the committee.

Not surprisingly, Speaker of the House Paul C (Complicit) Ryan is in support of Nunes.

“what about the Clinton emails”…

Why would Republicans want to discredit the FBI and disregard substantiated reports of Kremlin’s attacks on our democracy?

They are protecting themselves. These politicians are attempting to distract us from their own ties to Russian money, and other issues that might sway public opinion.

How is that strategy working so far? Well, it’s working with Trump’s diehard supporters.

Is anybody normal distracted from upcoming events, like Trump’s impending questioning by special council Robert Mueller? Trump’s lawyers have been denied in their requests to limit the scope of Mueller‘s interview.

Has anyone been distracted from the fact that Mueller’s investigation is not going well for Trump and his gang? Papadapoulos likely wore a wire, someone at Manafort’s firm likely had an informant, and this weeks big revelation— former Trump campaign adviser Rick Gates has been negotiating a plea deal to flip on his associate Paul Manafort. Speculation is that this will, in turn, force Manafort to flip on Trump.

Gates and Manafort’s testimony might offer proof that Trump is guilty of Russian money laundering. That in addition to the obstruction of justice case Mueller has built give Trump reason to want the FBI discredited. He wants public opinion on his side.

Have any of you middle class working Americans been distracted by your post “tax cut” pay checks? Have your paychecks increased as promised, or have they decreased due to increases in health insurance?

Well, don’t expect Trump to fix healthcare. This weeks most quietly reported news was Donald Trump’s newly confirmed Secretary of the Department of Health and Human Services. He is a former executive with Eli Lilly, whose legacy is raising prices significantly on drugs sold to American consumers.

The GOP has successfully distracted us with their talk of “the secret society” within the FBI… whose “goal is to undermine Donald Trump’s presidency.”

*BREAKING* Trump’s wounds are self inflicted. This will not end well for him, and he won’t go down alone.

All this talk of secret societies isn’t really fair. It’s taking the mystique out of real secret societies, like the ones my children were experts in during middle school. Let’s try to consider how this affects them.

One thought on “The Distraction of Secret Societies”