I admit I have a problem with anxiety. A bonus side effect of my anxiety is that when it reaches the red zone (mine goes up to eleven,) I break out in hives. It has only happened on a few extended occasions. The first time I experienced it was when I was finalizing plans for two of my three children to go away to college. The older one took a gap year, so they left within two weeks of each other. Not only did I take on a level of debt only surpassed by my mortgage, but my wee spawn swam far away- one on each coast. My face, including my eyes, swelled up for several months, never fully healing from January through September of that year. On the really bad days, I was unrecognizable- literally. I sat on my employee bus hoping people wouldn’t ask me what happened. My wish came true. No one spoke to me because they didn’t know who I was. Really.

I suffered through contact allergy testing, found out my allergies include nickel (which covers every doorknob,) nail polish, my shampoo, and Neosporin, (which I had been using to treat my flare-up,) and a few other random chemicals.

I threw out the Neosporin first and then eliminated all the allergens on the list I was given in exchange for hundreds of dollars in medical co-pays. I sprayed each doorknob in my house with several coats of clear topcoat, and I used my shirt as a barrier when I had to touch other people’s knobs. 😉 I’m sure I looked a little crazy.

I became aware that I have a habit of touching my face, and I have tried to stop. It’s a hard habit to break. None of my preventative measures or the medications I was prescribed helped with the swelling. The hives only cleared up after my girls were settled at school. My face has rarely flared up since, and then only when something big is happening in my life. None of the doctors considered stress as the cause, so this is all self-diagnosed conjecture, but it has proven to be correct.

I wish I were a nail biter instead, but I’d probably have chewed my fingers down to my knuckles by now. Instead, when my anxiety level shoots up I feel a tingling on my face, then it itches- and that’s how it starts. I’m feeling it now and in the week ahead I expect my face to be covered in hives. 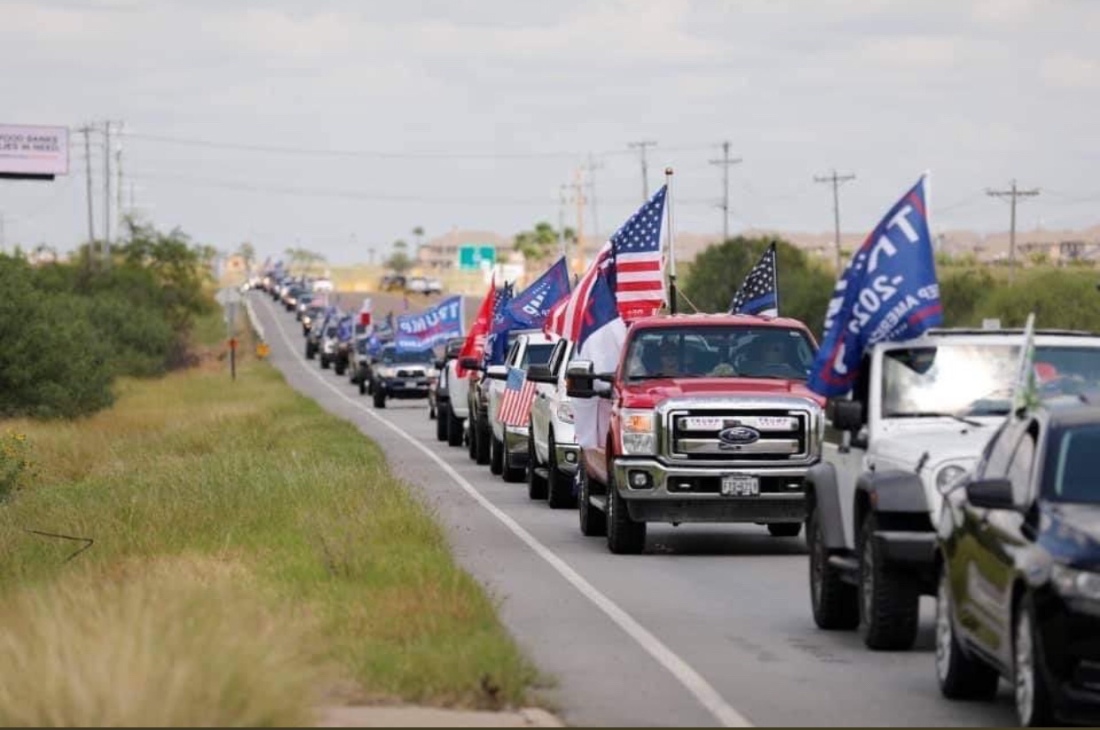 This election is making me ill. I know I’m not alone. The news yesterday, regarding a large group of Trump supporters in Texas, had it’s desired effect. Steroid abusing vigilantes, some armed, driving similar vehicles surrounded a Biden campaign bus, slowing down in front of it and trying to run it off the road. They rammed into surrounding vehicles to maneuver themselves closer to the bus. According to a volunteer who was there:

”The police refused to help. When I flagged down one officer, he said his hands were tied: ’not my jurisdiction.’ He was wearing a blue stripe bandana.”

Staffers on the bus called the police, who eventually helped them reach their destination, but all remaining Texas campaign activities were canceled for fear of violence.

This makes me wonder what Bill Barr has been up to in these weeks that he has avoided the public. According to the following alarming story he has been deputizing local police as federal agents and spending $400 million to hire new forces.

The intimidation by “the Trump train” in Texas was ordered by Don Junior, (see tweet below.) Junior is the guy Special Counsel Robert Mueller deemed too stupid to be indicted. He keeps breaking the law, this time by inciting violence. Is it still okay because he’s an idiot? Couldn’t that case be argued by every felon?

It was Jr.
Jr initially called them to go after Kamala in McCallen Texas. Kamala, a United States Senator.
Have some fun, he said.
White House request. pic.twitter.com/GVnLi6q10l

Texas is a target because it has gone from a red state to a purple state on the verge of going singing the blues. Early voters have surpassed the total number of Texas votes in 2016, with 9.6 million ballots cast. In 2016, only 8.9 million people voted statewide. 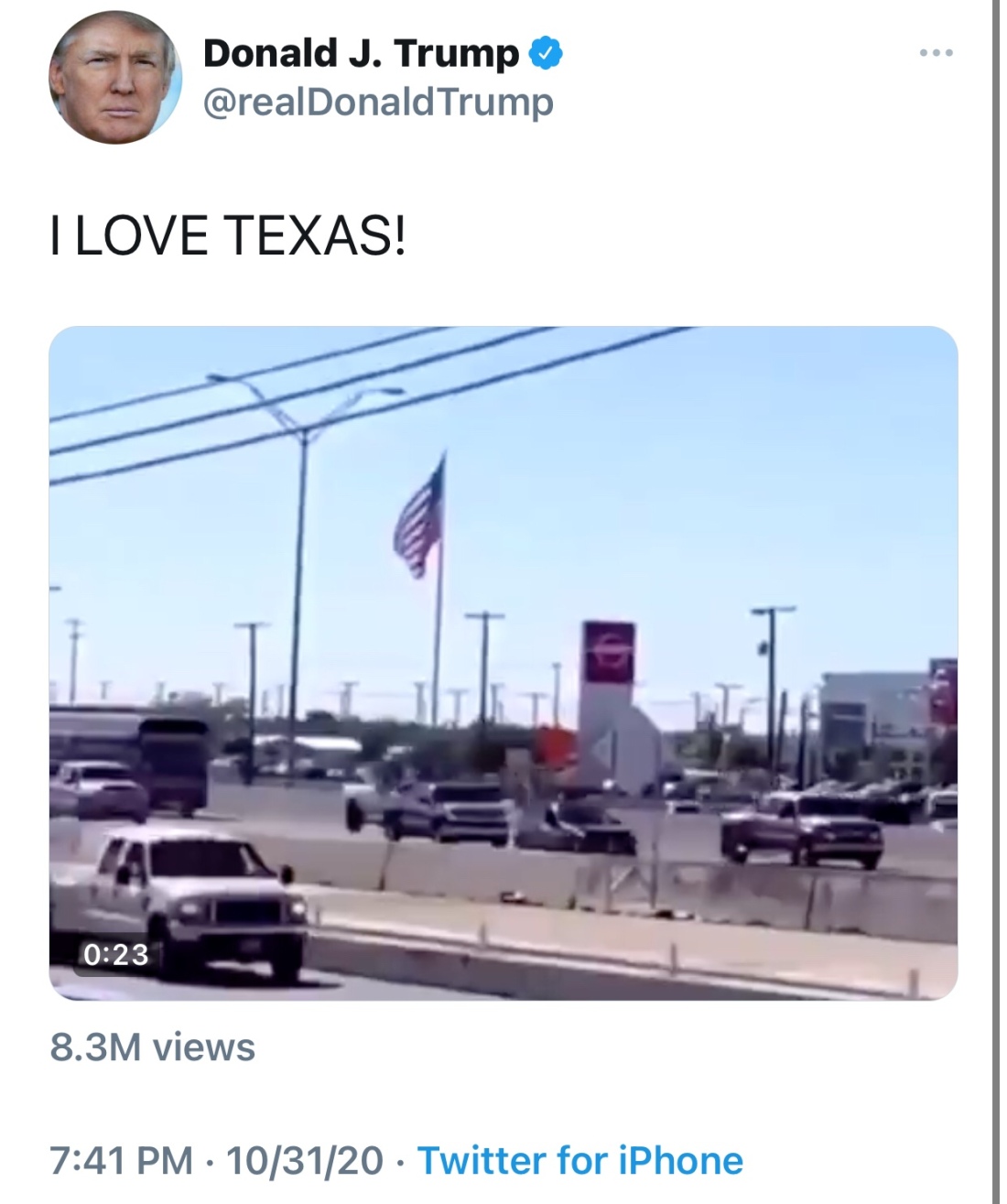 Trump condones this intimidation and will continue to incite violence. (“Proud Boys, stand back, and stand-by.”) The media has a responsibility to edit Trump’s calls to violence, but I doubt they’ll have the foresight to put him on a delay.

@TexasTribune This appears to be the truck and passenger that attempted to run over protesters and later attempted to run the Biden-Harris campaign bus off the road side.
Do something @GovAbbott pic.twitter.com/VXzV25m2tn

There are several accounts and videos of the events that led to a cancellation of Biden’s remaining campaign events in Texas.

“At least the Trump hearse is appropriate given the 200K+ Americans who have died due to his incompetence,” he added

The most recent tally has us at more than 92 million early voters casting ballots by Saturday. That’s a record. It also equals 67% of the total votes cast in the 2016 presidential election, when only about 139 million people voted.

A vast majority of the early votes have been cast by registered Democrats, and Biden may be polling over double what Hillary was with independents, but Republicans are fighting to invalidate hundreds of thousands of ballots nationwide.

Texas is worth a whopping 38 electoral votes. The fact that it’s no longer a guaranteed win for Republicans has led a conservative activist and three Republican candidates in Harris County to argue in court (tomorrow,) Monday, that the 127,000 ballots cast in a drive-through polling station, should not be counted. It was set up as a safeguard against the spread of COVID19. 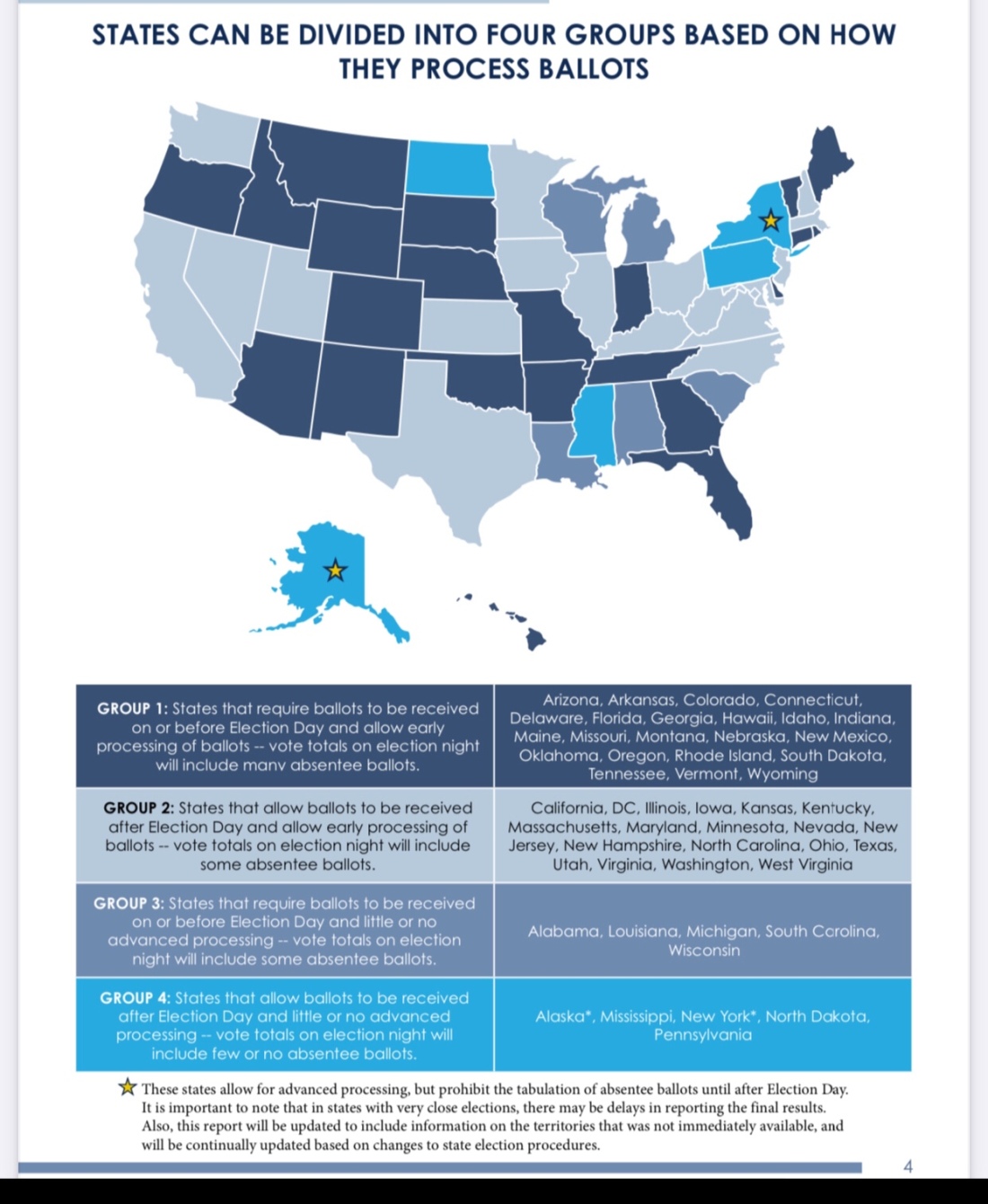 I posted ☝️🏼that yesterday, but I think it’s important. It helps to understand why some states announce results faster than others. Until all the votes are counted this election will be hard to predict. How many of us went to bed in 2016 thinking Hillary had won only to wake up to the news that the opposite was true?

Anyway, I hope you voted. If not I urge you to vote early on November 03. I also hope your anxiety level is under better regulation than my own is.