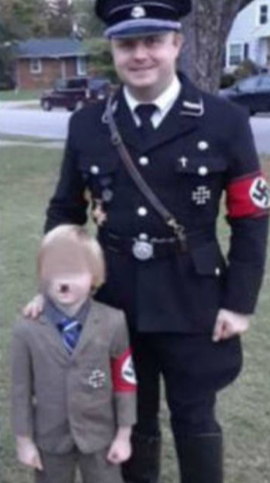 This story is ancient by White Nationalist Trump news standards; it was published on October 28, 2018… yesterday morning.

In Kentucky, parent Bryant Goldblach dressed as a Nazi SS officer for Halloween, and dressed his 5 year old son as Adolf Hitler. This epic idiot was shocked at the backlash he received.

The father is quoted in the last paragraph of the article:

“We saw people dressed as murderers, devils, serial killers, blood and gore of all sorts, nobody batted an eye. But my little boy and I, dress as historical figures, and it merits people not only making snide remarks, but approaching us and threatening my little 5-year-old boy. Yes liberalism is alive and well. And we had the displeasure of dealing with the fruits of the so called “Tolerant Left.””

The intolerant left is the problem according to “dad” because dad sees the Nazis, not as real life murderers, devils and serial killers, but as “historical figures.”

A father dressed his son as Hitler for Halloween, and was shocked at the backlash he received

The day prior to the publication of this story by Newsweek, 11 people were murdered and six injured in this country’s latest mass shooting. This shooting took place in a Jewish Synagogue at Pittsburgh’s Tree of Life Congregation. The gunman entered and opened fire as he shouted “All Jews must die!”

To be fair to the epic idiot racist dad, who dressed in Nazi regalia and doesn’t understand the hostility, the photo was taken on Thursday, October 25, 2018, 2 days prior to the mass shooting. Who knows if he would have changed his costume plans had the timing been different.

What’s next, caged baby costumes, children in bondage and calling them victims of sex traffickers?

I can not understand the ignorance in this country.

Try to explain to a racist that their xenophobia is a tool used to divide the country, they might punch you.

“History dad” should read some history. If he did he’d learn that conquering nations by dividing them first is a tactic tried and true.

Trump won his fan base when Russian trolls filled Facebook with made up racist news stories, targeted at the most likely receptive audience, as per data they purchased from Cambridge Analytica.

Racist fear mongering was also a tool Hitler used during his rise to power. Xenophobia destroys communities and it destroys nations. This is America, the “melting pot”.

I do not watch Fox, so this is third hand information— Sunday morning on Fox News, Lou Dobbs had as his guest Chris Farrell. Farrell was allowed free reign to rant conspiracy theories about the caravan asylum seekers who are 1000 miles away. He claimed it was funded and directed by the “Soros-occupied State Department”.

George Soros is an extremely wealthy investor, and a democrat, who donates millions to the party. He is also a Jew. Farrell was spreading the theory that the caravan is part of a ZOG conspiracy.

“ZOG” stands for “Zionist occupied government.” To spell it out for you, he is claiming the US government is “controlled by Jews”. “ZOG” is a phrase commonly used on neo-Nazi, white supremacist websites .

This conspiracy theory, that Soros and Jews are funding a caravan of terrorists has been constantly repeated on Fox, and only because of the mass shooting has it been tampered down.

Chris Farrell has since, due to public outcry, been banned by Fox as a future guest for spreading fake news. (Weird, I know.)

Hasn’t this fear mongering crossed a line? These are asylum seekers who are 1000 miles away. They have a legal right to seek asylum in the US. The violence they are running from is, in part, a result of US policies. These caravans are meant for safety in numbers, nothing else, and they are not a new phenomenon.

Trump is a pied piper drawing racists and idiots and racist idiots to the polls.

Democrats need to turn out in record numbers to overcome the widespread machine tampering that has been reported in states that refused to replace their touch screen machines.

I feel old. I remember when Halloween was fun. 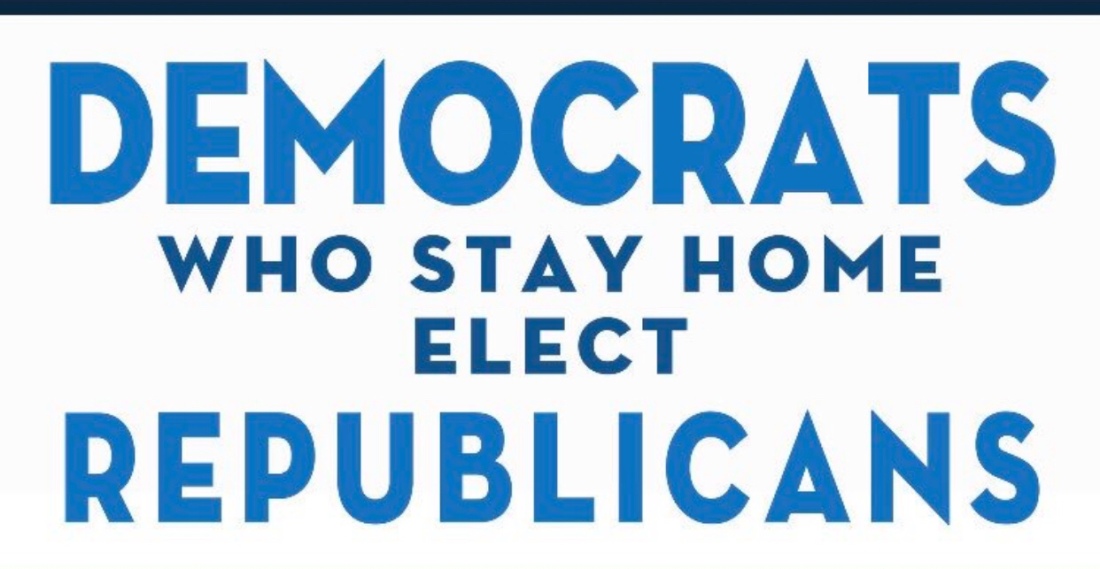 2 thoughts on “Unfortunate Idiots and Halloween”