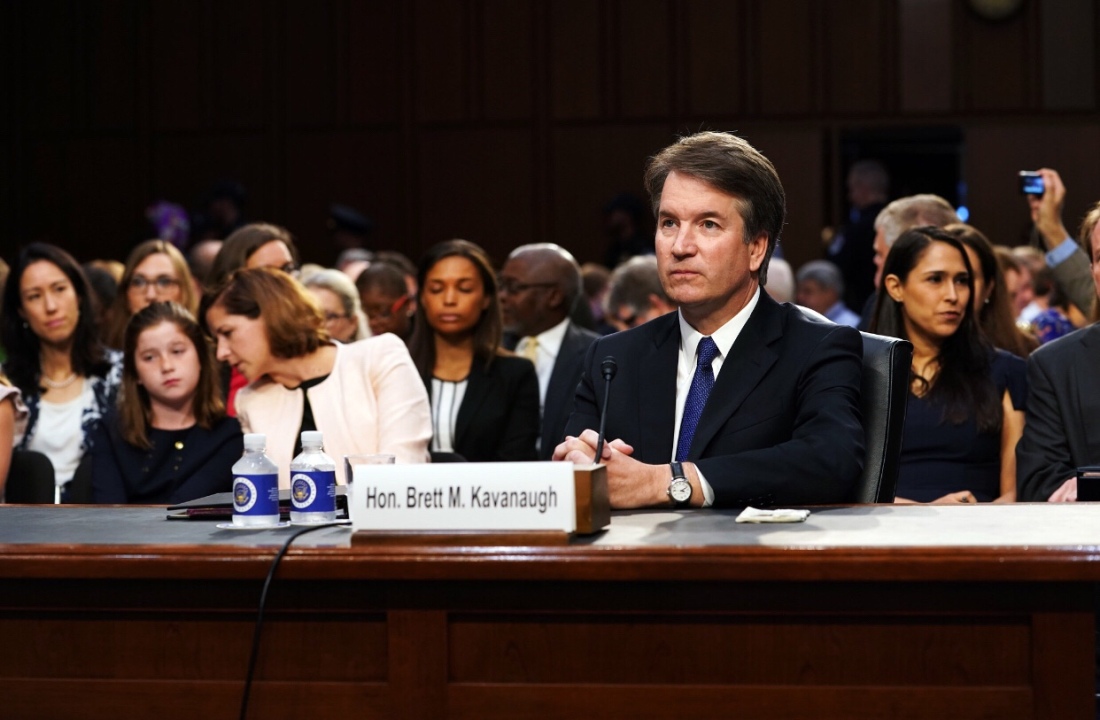 The United States Supreme Court has an opening that the GOP is determined to fill before the 2018 midterm elections… if not this week.

This is not business as usual. It has been a very ugly business typical of Trump, from the beginning, before the vacancy occurred. 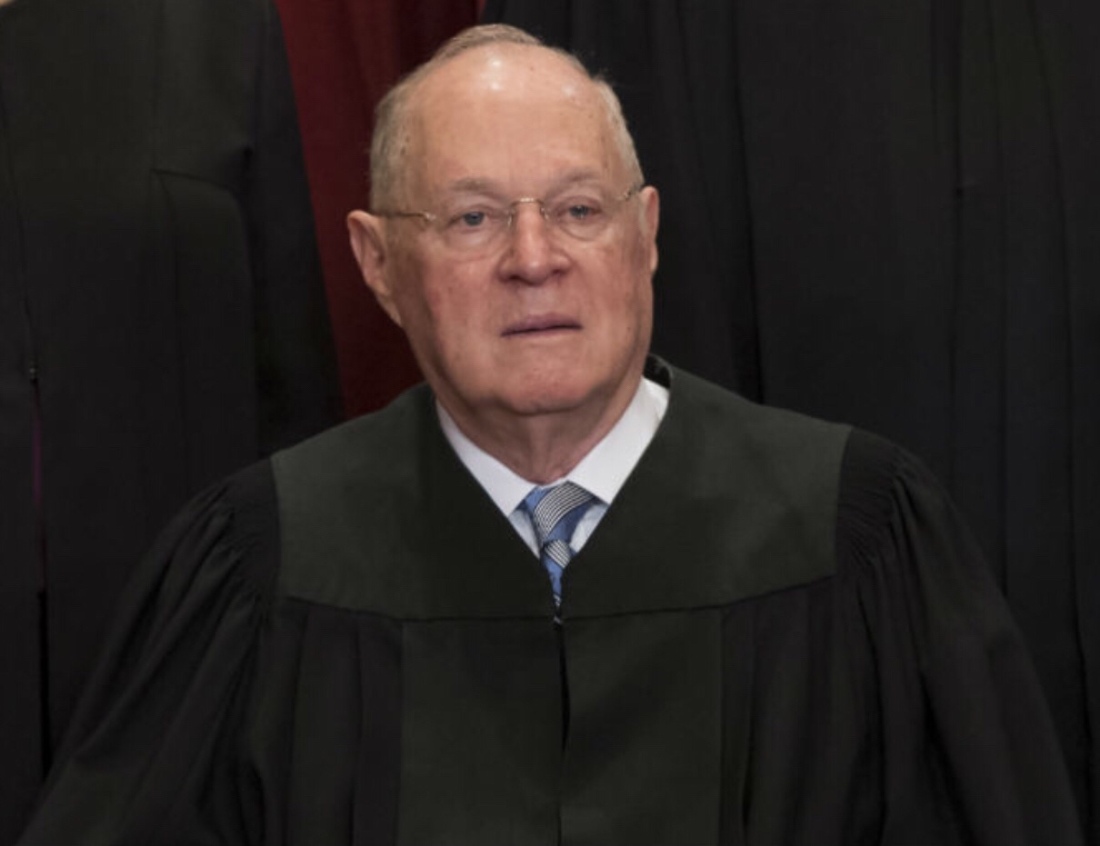 The judicial opening was created when 81 year old Justice Anthony Kennedy retired, seemingly without notice, but in actuality it was after 17- months of negotiations with Donald Trump, his family, and his administration.

“If you’re thinking about quitting this year, do it yesterday.”

Why would Justice Kennedy take the bait?

Anthony Kennedy’s son, was employed with Deutsche Bank for 10 years, as Trump’s mortgage lender. Deutsche bank is under investigation, and was fined more than $7 billion by the U.S. Justice Department and U.K. regulators for what they call “mirror trades.” I’m not sure how “mirror trades” are different than “money laundering,” because they basically shifted $10 billion from one account to another, and back again a few times until no one remembers where it came from. The money belonged to Putin’s guys, Russian Oligarchs. 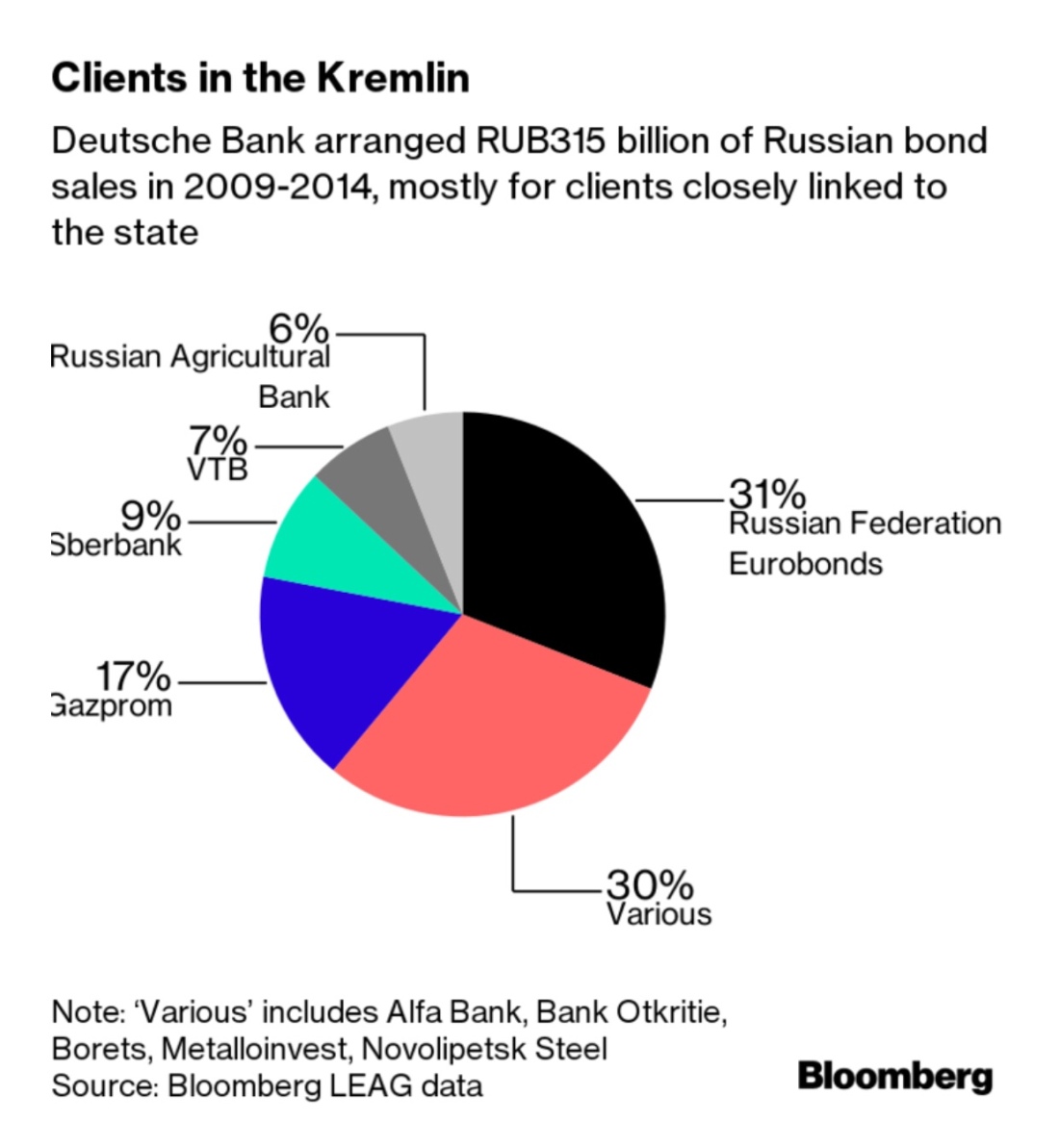 *You May find this hard to believe, but I am making a long story short. Forgive any missing information, it is for the sake of brevity.

Shockingly (sarcasm), the German bank tied to Russian mob money became Donald J Trump’s primary mortgage lender. At the time, US banks refused to work with the failed businessman. Trump’s financial history: 6 bankruptcy filings and hundreds of millions in unpaid debts, made him a risky customer for any honest lender. (oxymoron)

Deutsche bank also saved Jared Kushner from financial ruin after he purchased an overpriced piece of real estate, 666 5th Ave, for $1.2 billion… before the market collapsed. (666, the mark of the beast, might have been a clue that it wouldn’t go well.)

So we have the son of a Supreme Court Justice entangled in Trump’s Russian mob “money mirroring” scheme. Dad knows enough to be worried about his son’s day of reckoning.

Justice Kennedy would have had to recuse himself from his son’s case, if it made it as far as the Supreme Court, and he was in certainly old enough to retire.

But what exactly was negotiated with Trump over those 17 months?

Trump is not human resources for Supreme Court Justices. He had no right to be involved in Justice Anthony Kennedy’s retirement. His goal is to install a judge, a new swing vote, who has made it clear that he does not think a president can be indicted.

You may remember when President Obama had 1 year remaining in his presidency, his Supreme Court pick, Merrick Garland, wasn’t even considered. Why? Mitch McConnell invoked a new rule that the nomination was too close to an election. The seat remained vacant for over a year, until Trump chose Neil Gorsuch.

That Mitch McConnell rule apparently only works when the president is a Democrat.

Donald Trump has acknowledged the likelihood that, when democrats take back the majority in congress, impeachment proceedings will commence… as they should. The man is a traitor.

(Please watch Active Measures if you still have any doubt.) 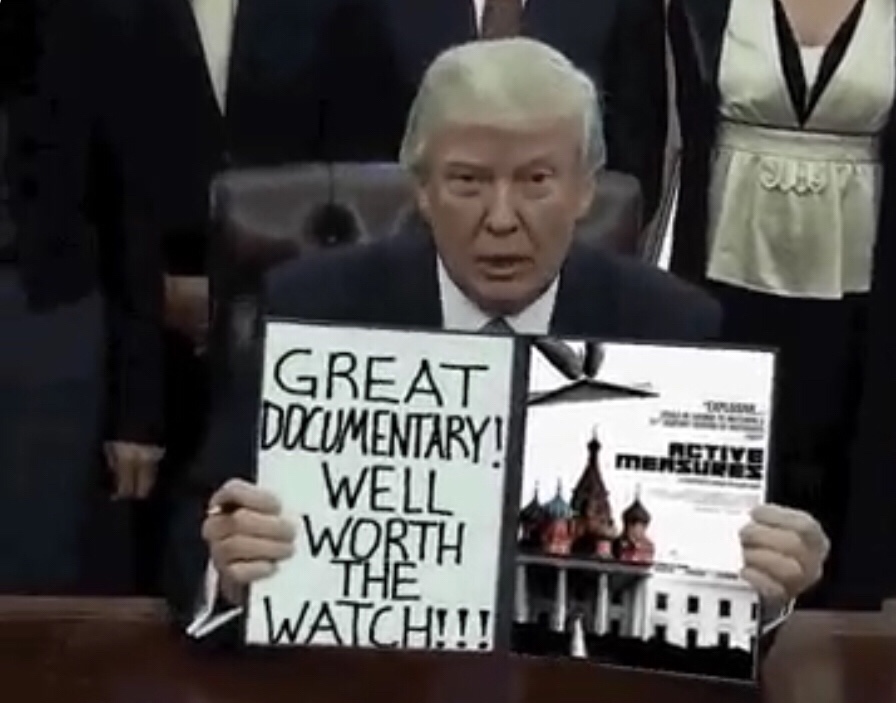 Picking the judge who will be the swing vote for your own trial… it sounds like a nice perk for a president, but it isn’t. It is outrageous that this has gotten so far. Trump is turning the US is into a dictatorship, with the help of a compromised and corrupt GOP.

Russia hacked the 2016 election. The election tampering has gone unchecked, no safeguards have been added. There is proof of repeated hacking attempts in several states. Russia would love to decide who our “elected” officials will be, indefinitely.

Brett Kavanaugh is Trump’s choice for one of the following reasons:

He is a threat to the ACA and Roe v. Wade.

He will side with special interests and corporations.

He believes the President is above the law.

I’d give you a thorough history of Kavanaugh, but all I got out of today’s hearing— he ran a marathon, Orin Hatch likes him, he coaches his daughters sports, and he is a Yale grad.

Incidentally, someone on twitter stumbled on this and I thought I’d share. It is an open letter, a petition created by Kavanaugh’s fellow Yale allumai.

They’re worried about our democracy and believe Kavanaugh should not be confirmed.

Chairman Charles Grassley, the senior United States Senator from Iowa who is the running the confirmation shit show only requested 10% of Kavanaugh’s documents.

It is customary to request a nominees full record. If math isn’t your thing, that would be 100%. (One more 0) 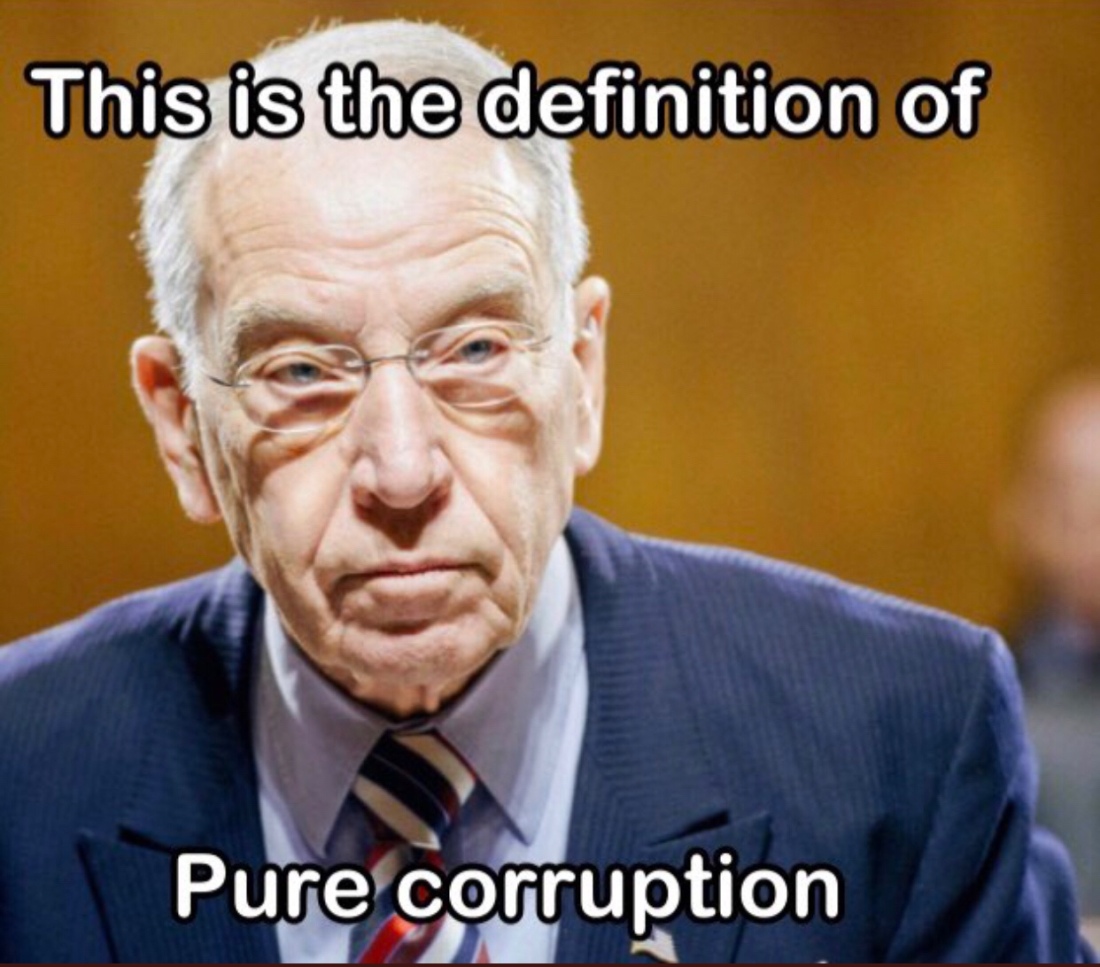 What are they hiding?

Today was day 1 of Kavanaugh’s confirmation hearing. Chuck Grassley said it should be concluded by Friday.

The hearings should not be taking place at all.

I neglected to mention that those 40,000 pages of records, sent to the senate last night, made up only 10% of the man’s history. Of that, 6% has been limited by executive order. The senate can only question Kavanaugh on 4% of his history. Again, it is customary for 100% of the nominees history to be released. 96% of his record is MISSING

Who else goes into a job interview saying “you can only consider the highlighted portion of my resume”?

Grassley claimed all of the republicans read the entire 40,000 pages over night.

So, there was no reason to postpone the hearing.

Was Grassley’s statement, that republicans read 42k pages of documents submitted at 8:40 pm by the next morning, given under oath?

Lying under oath is illegal for us mortals. Reading 42k pages in 12 hours, and then showing up for a hearing bright eyed and itching for a fight, is impossible. Chuckie is a liar.

Things are not looking good thing for America.

The Democrats put up a good fight, all asking for a postponement of the hearing until they had all the information they needed to fully vet the nominee. Senator Blumenthal and Kamala Harris both called Donald Trump an unindicted co-conspirator who is attempting to hand pick the judge who will likely decide if he and his administration are indicted. 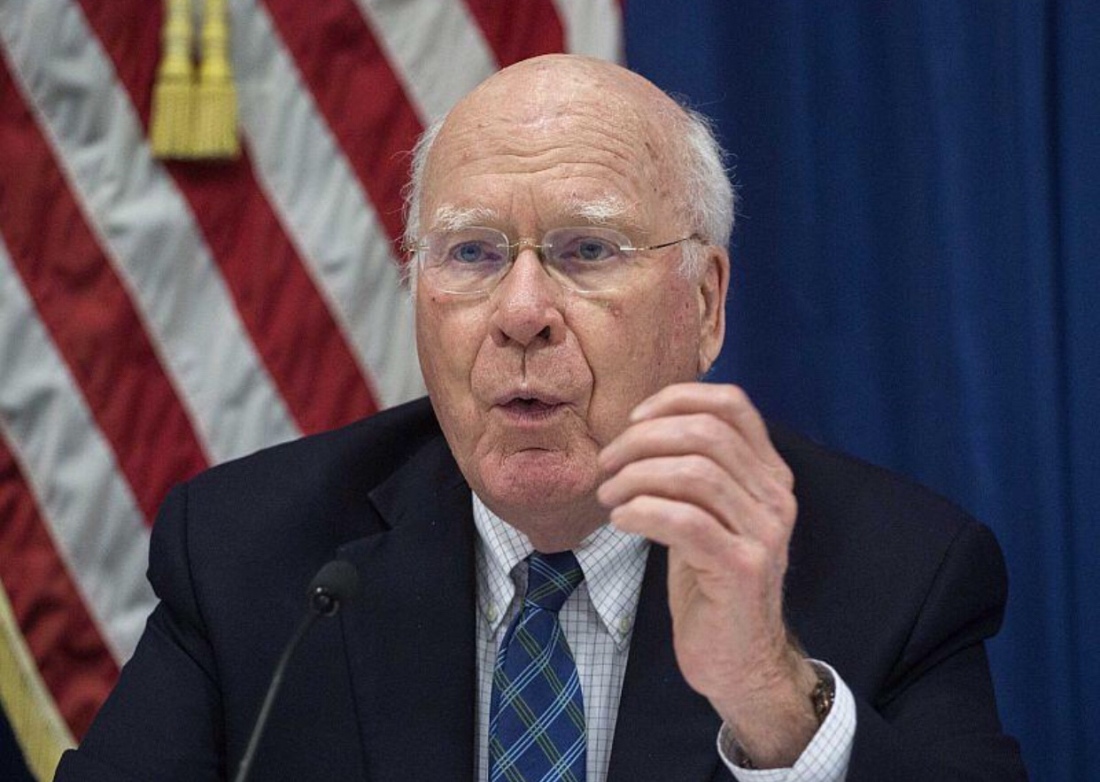 “This is the most incomplete, most partisan, least transparent vetting for any Supreme Court nominee I have ever seen, and any Republican attempt to say otherwise is downright Orwellian.” ~Democratic Sen. Patrick Leahy 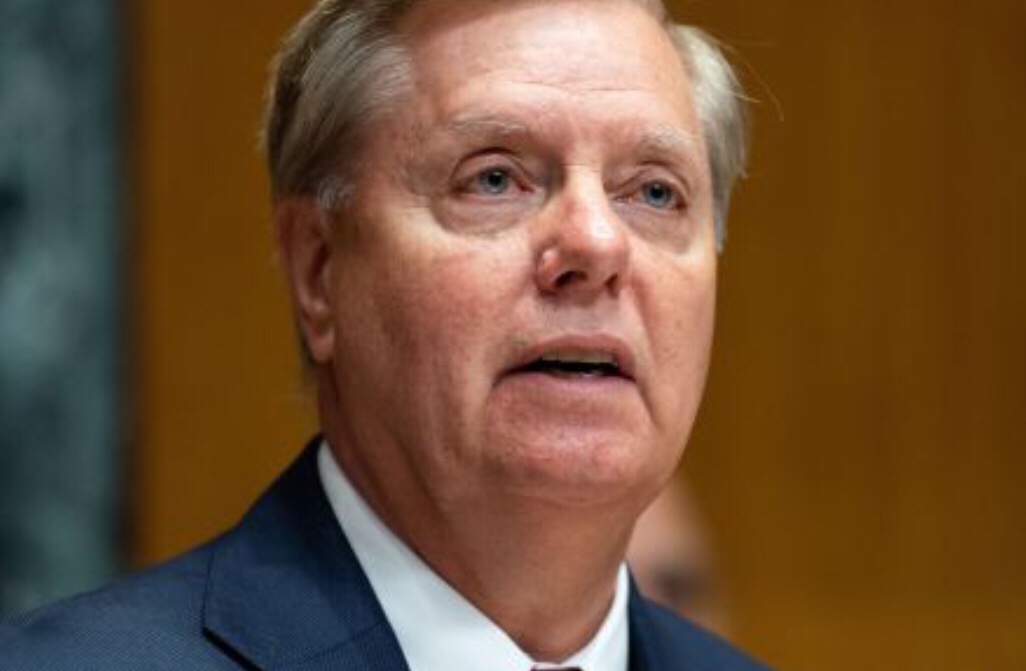 Lindsey Graham used his 10 minutes to talk about Hillary Clinton. No, I’m not kidding.

Okay, I stopped watching at some point for mental health reasons.

But there were 2 odd occurrences worth mentioning.

Let’s discuss the woman sitting behind Kavanaugh, during the hearing. 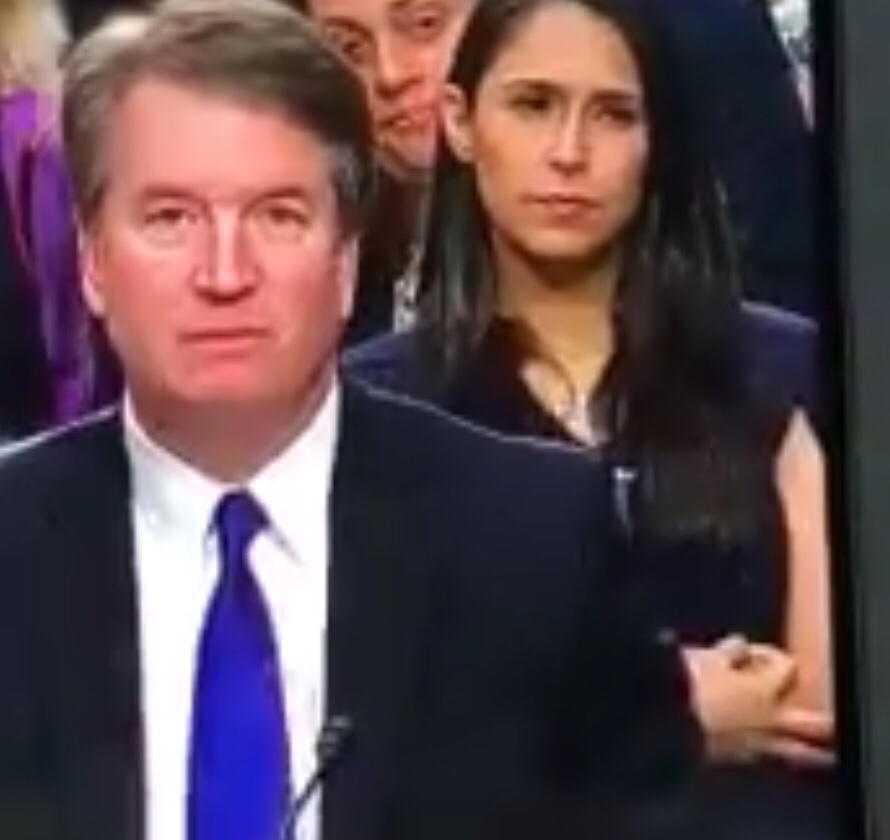 Zina Bash (not xeno-bash), is part of Trump’s domestic Policy team, working on regulatory reform, and Trump’s immigration policy. She reports to (Nazi) the man who orchestrated the separation of children from their families, Stephan Miller.

She could be seen sitting behind Kavanaugh. At one point she appeared to check her phone, then put it away, smiled, and flashed the White Power sign, for about 30 seconds.

Honestly, I don’t what I think about this, but I do know Trump is making us all a little crazy.

Is this the new face of American white supremacy: a rich, well placed, climate change denier? 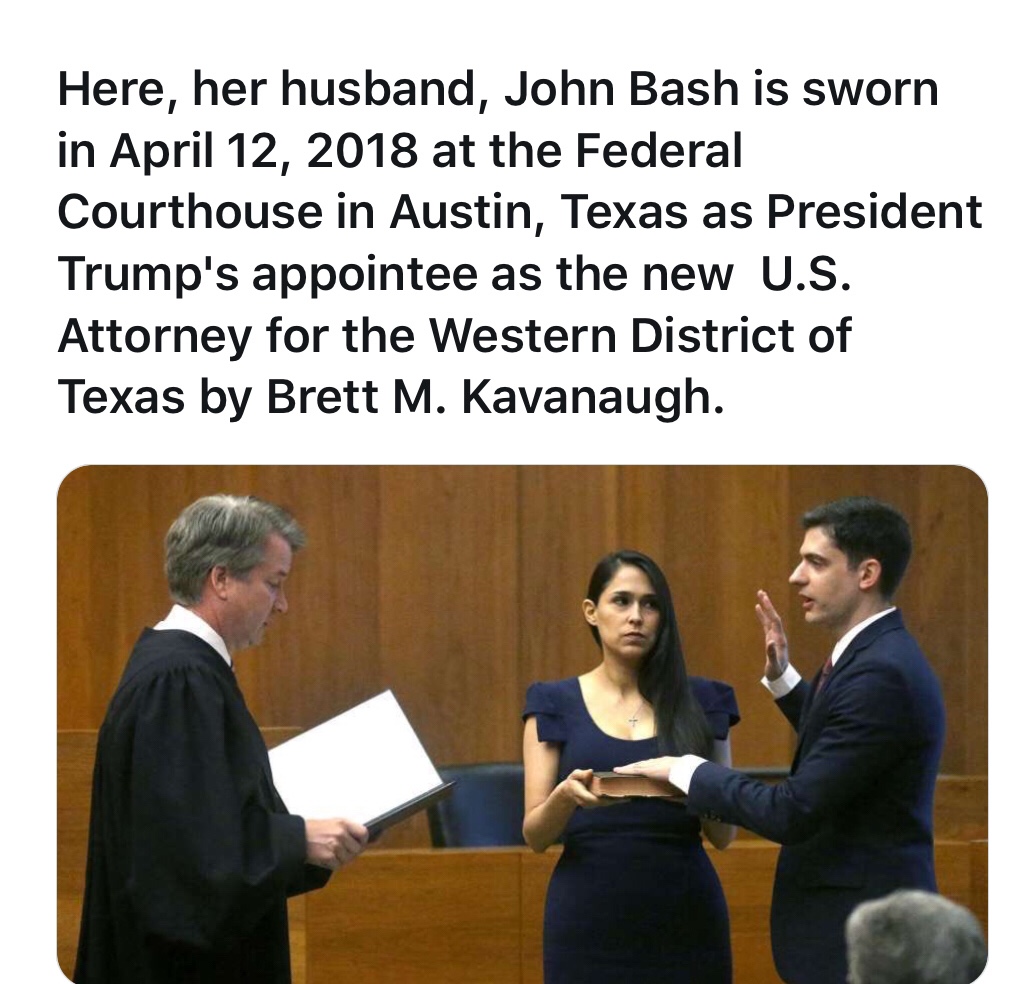 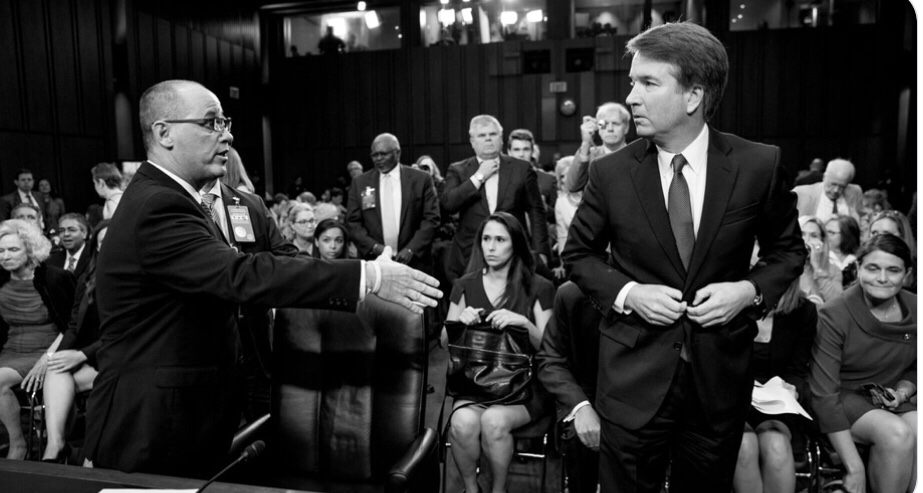 Fred Guttenberg, father of Jamie Guttenberg, a student killed during the shooting in Parkland Florida, tried to shake hands with Donald Trump’s Supreme Court nominee. Extending his hand he said: “My daughter was murdered at parkland.” Hearing that, Brett Kavanaugh turned his back and walked away, without shaking Guttenberg’s hand. 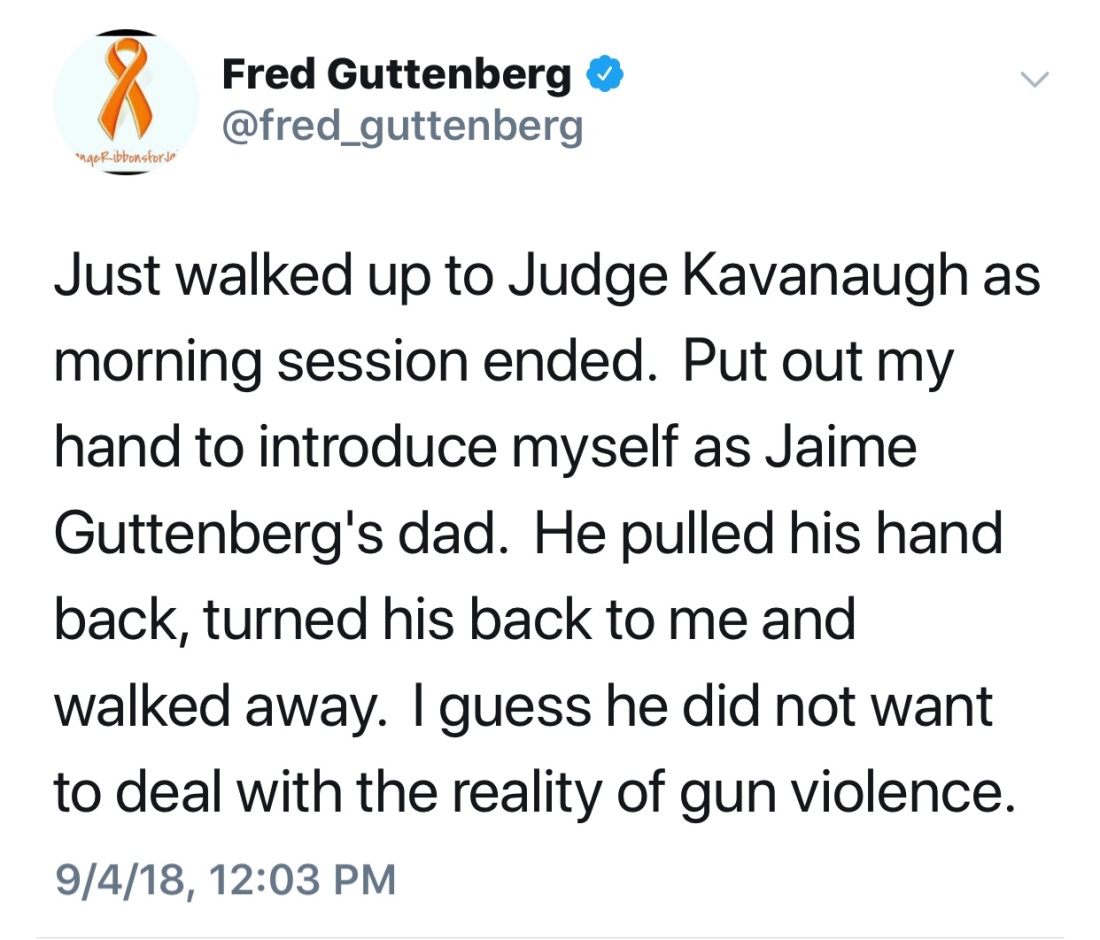 Kavanaugh has accepted NRA money in the past, and apparently the organization has pledged $1 million for pro-Kavanaugh ads.

With Brett Kavanaugh, Trump Has Found a Way to Repay the NRA

Only 38% Americans polled think Kavanaugh should be conformed.

I’ll end this on a happy note: protesters periodically interrupted the session with shouts, and Hand Maids surrounded the exits. 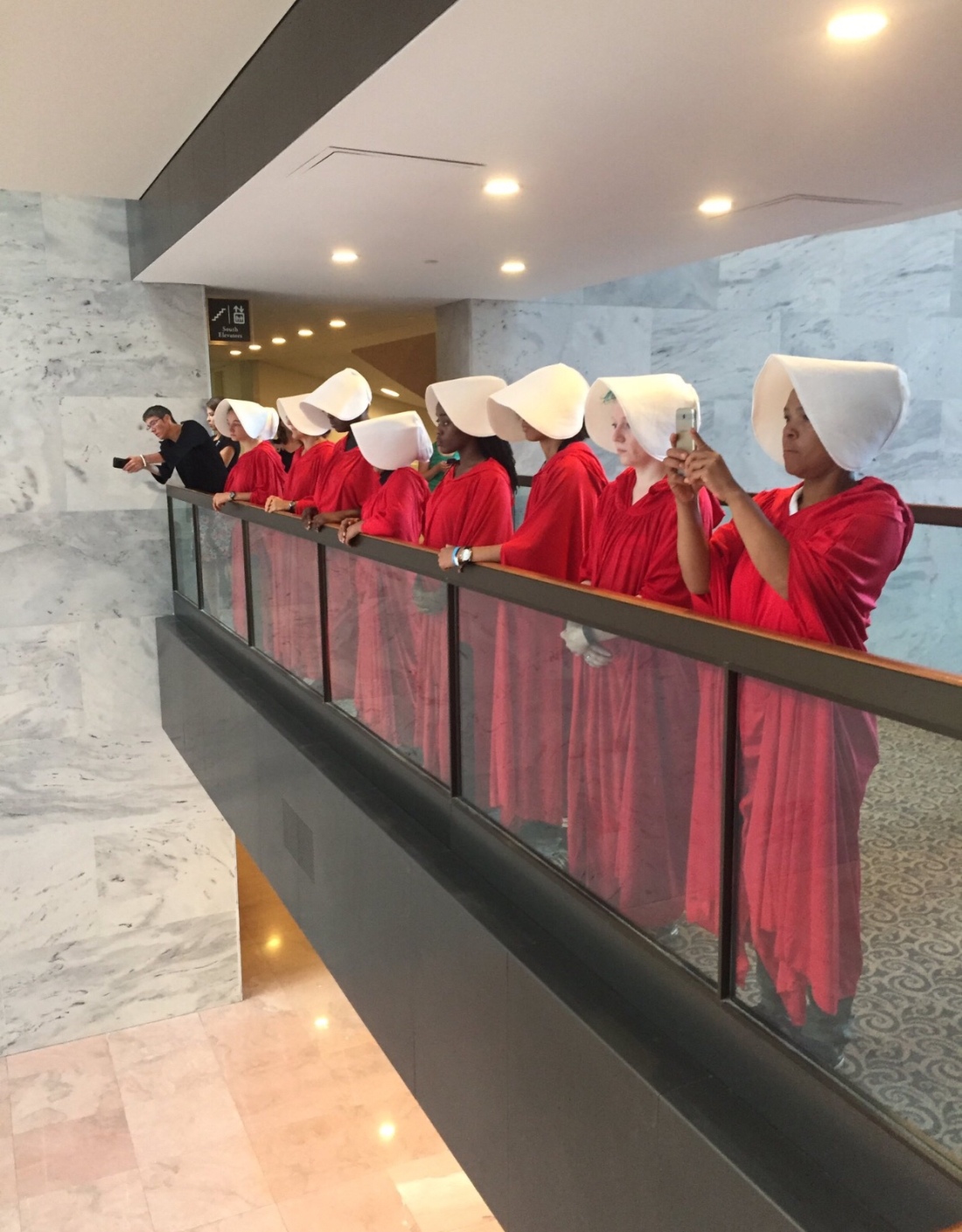