Remember the collective sigh of relief we breathed as a nation when the Senate rejected the American Health Care Act, Paul Ryan’s answer to Affordable Care Act?

The bill had narrowly passed in the House with 217 members voting Yes, and 213 voting No. (Every Democrat, 193 voted no, joined by 20 republicans— 217 Republicans voted yes, 1 didn’t vote.) Celebrations were had by all- Paul Ryan received a pat on the back from Donald Trump, along with a “good job” and “we did it”—mwahahaha

The bill moved onto the Senate where it was… voted down.

Relief was felt by many who assumed the Senate would rewrite the bill more humanely.

Instead, these thirteen Republican Senators met behind closed doors to “fix” the bill, without input from anyone, without a word as to what exactly they were doing. They didn’t do anything, the bottom line is the same. They would throw us all under the healthcare bus in order to keep their special interest donors happy, and none of them would lose a nights sleep.

Of the 100 US Senators the bill needs a majority to pass. 50 will be sufficient with VP Pence acting as the tie breaker.

Pence is a so-called Christian who would vote to take away the healthcare of 23 million Americans…because, although it’s not what Jesus would do, it will rid us “of the burden that Obamacare has placed on your businesses and on families in your communities,” yeah he said that.

But, this bill will not pass in its current form. All 46 Democrats, along with 2 independents will vote no, and there are 4 Rogue Republican Senators who have stated they’ll vote no on the bill as it is written today. The remaining 48 Republicans are expected to vote yes.

The odd thing is of the four Republicans who have said they plan to vote against the bill, *Ted Cruz (R TX), *Mike Lee (R UT), Rand Paul (R KY), and Ron Johnson (R WI), two of them were part of the secret group who wrote the bill behind closed doors without the input of anyone else. Hmm…curious.

While the bill is not expected to pass, don’t get too excited, it won’t go away. The Senate will work to improve on the garbage Mitch McConnell and his twelve accomplices put together. It will be another exercise in moving around the same empty shells. Those four Republicans will eventually be pressured or bribed and will change their votes.

The Trumpcare bill won’t disappear. There will be no starting from scratch or working to improve or fix the now very popular Affordable Care Act (Obamacare), for a couple of reasons.

If not now, then in a few months America will be without affordable healthcare. Until we fully commit to removing the GOP from Washington, we are a doomed society.

The following is a list of members of the House of Representatives who voted yes, and are up for reelection in 2018: 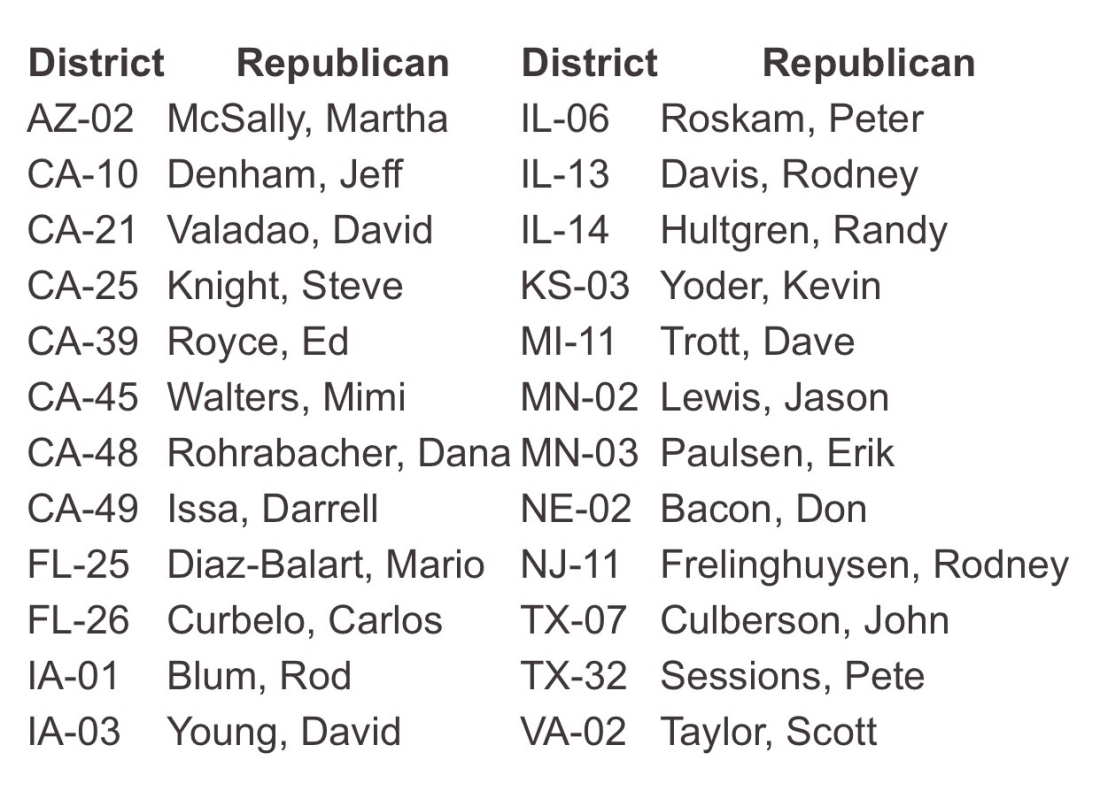