Is anyone else angry that a two-bit hustler can cheat his way into the White House and then manipulate an entire party into helping him cheat to stay there? Does it bother anyone else that he doesn’t even know what is in the constitution, this guy who claims he was elected by the people to be president?

Thursday’s proceedings have begun and from the opening,

Last night, Wednesday, I watched all I could stand, as the House Judiciary Committee formally considered the articles of impeachment brought against Don-the-Con, Squatter in Chief. It started at 8 pm et and continued for over four hours, more of the usual: Democratic representatives argued on behalf of the constitution, democracy versus dictatorship, tRumps undisputed attempts to cheat AGAIN in 2020. 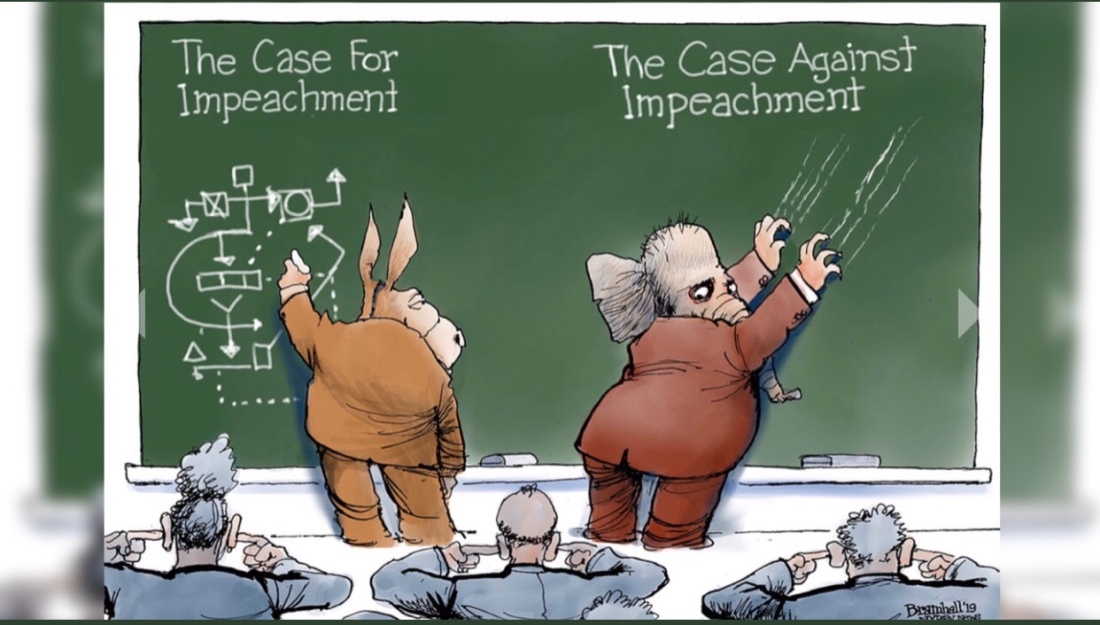 And the screaming GOP, whose goal must be to turn viewers away, to prevent them from hearing proof of impeachable offenses, are effective. They ignore the Intelligence Communy report that found no conspiracy or wrongdoing, and they conveniently forget how many of tRump’s people have been indicted, they continue to lie about what Mueller reported, and they redirect accusations toward— Obama. Yes they did.

In short order, I began to mute each of their five minutes; and eventually I stopped watching entirely. 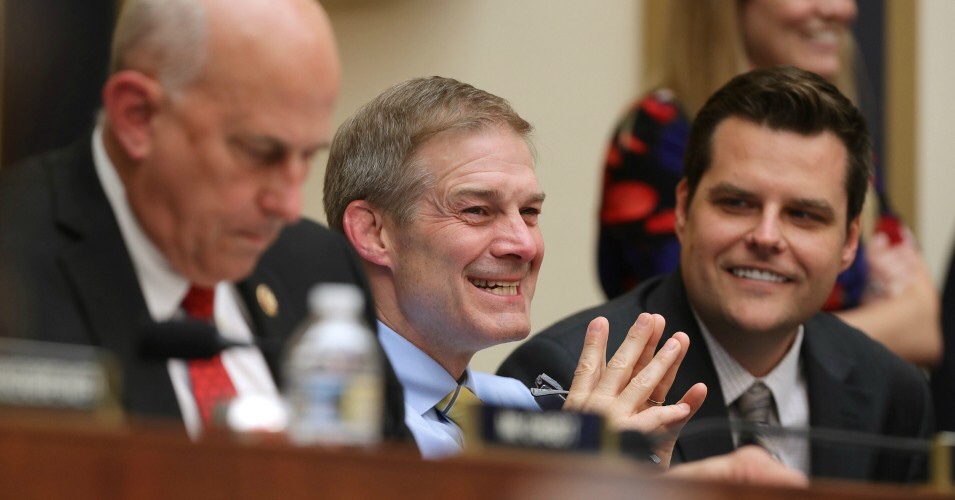 Republicans have never argued a point, because there is no excuse for tRump’s criminality. They are there to disrupt proceedings, and distract with cries of “rigged, fake, unfair, unfounded, coup, overthrow 2016 election results, Ukraine got their money, no solid proof, no witnesses testified for the POTUS, what’s the rush?” and this one is almost funny, almost: “no abuse of power took place,” etc. 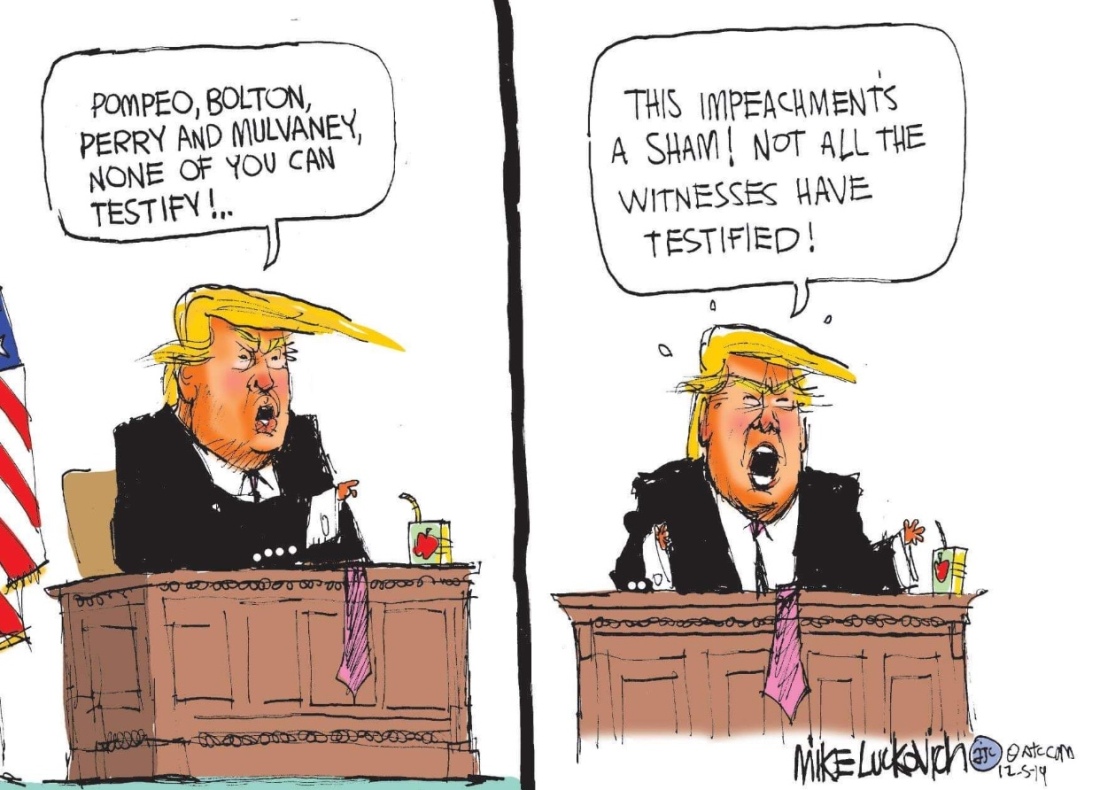 There were no witnesses for tRump because he obstructed them, no documents because he blocked them. Still, there was enough credible first-hand witness testimony, that none of the withheld evidence mattered, except to add an obstruction of congress article to impeach him. 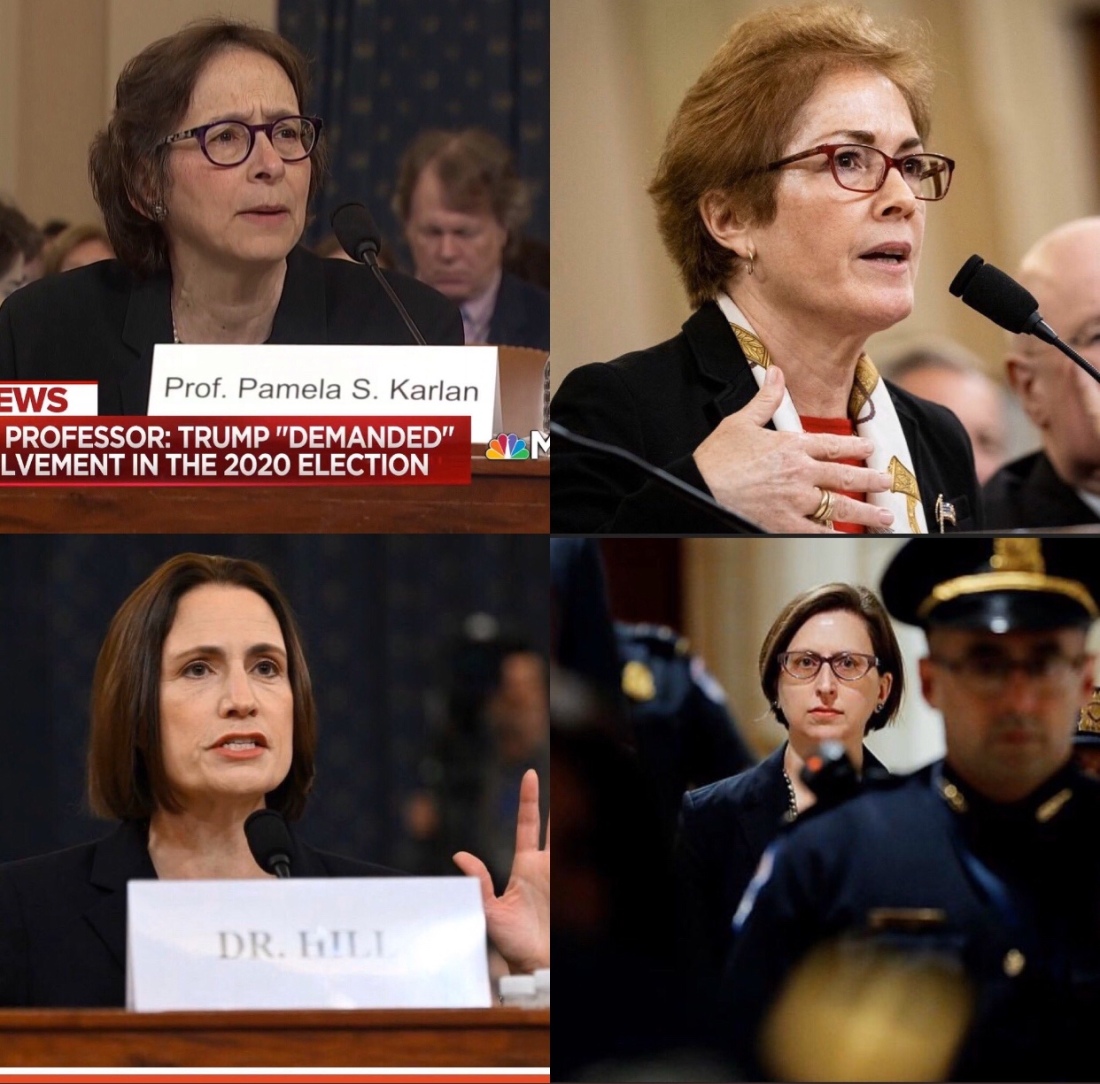 Innocent men do not behave the way jackass-45 behaves. The White House threatened witnesses who testified- that is mob behavior.

My astonishment is that not one republican put country before party, not one upheld his oath to the constitution. 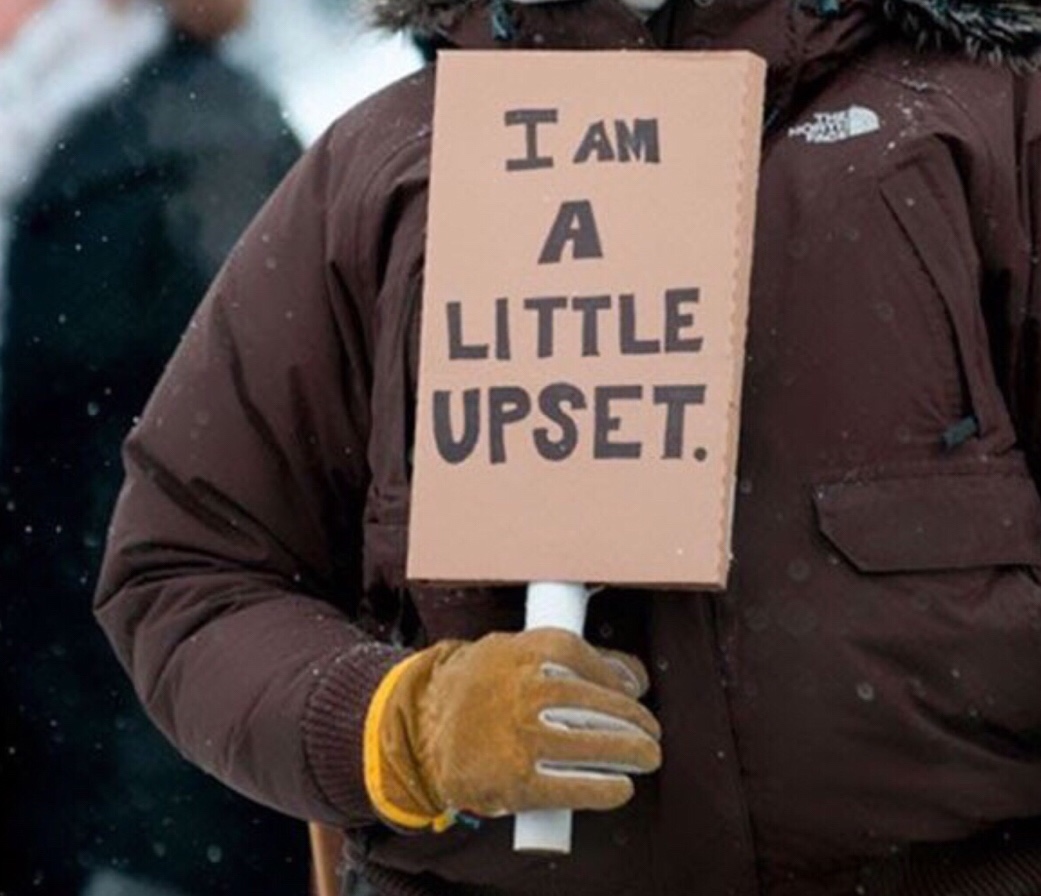 Why are Republicans so willing to give the U.S. to Russia? If you were paying attention to James Comey, when he was still FBI director, you must remember what he said about Russian hacking.

Yes, the Russians hacked the DNC; we know that because they published those emails to harm Democratic elections.

Russians also hacked Republicans, but they held onto that information to blackmail and manipulate the party. The GOP is hiding something insidious; they must be if they’re willing to fight to the death for a Russian mob lackey. 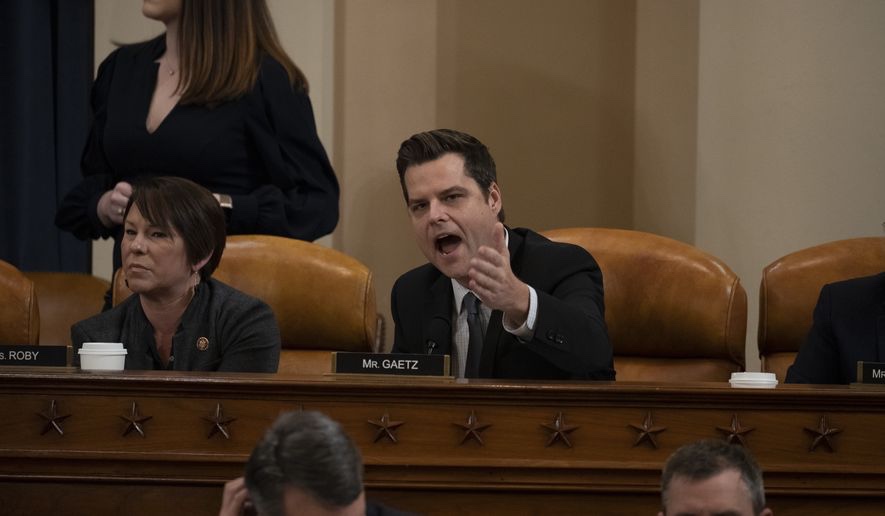 During these impeachment proceedings, they repeat the same talking points, which brings to mind the two emails that listed responses republicans should give in answer to media questions. The emails were meant for the GOP but inadvertently sent to all members of congress, and then published. Proof that their words and behavior are a marketing strategy. 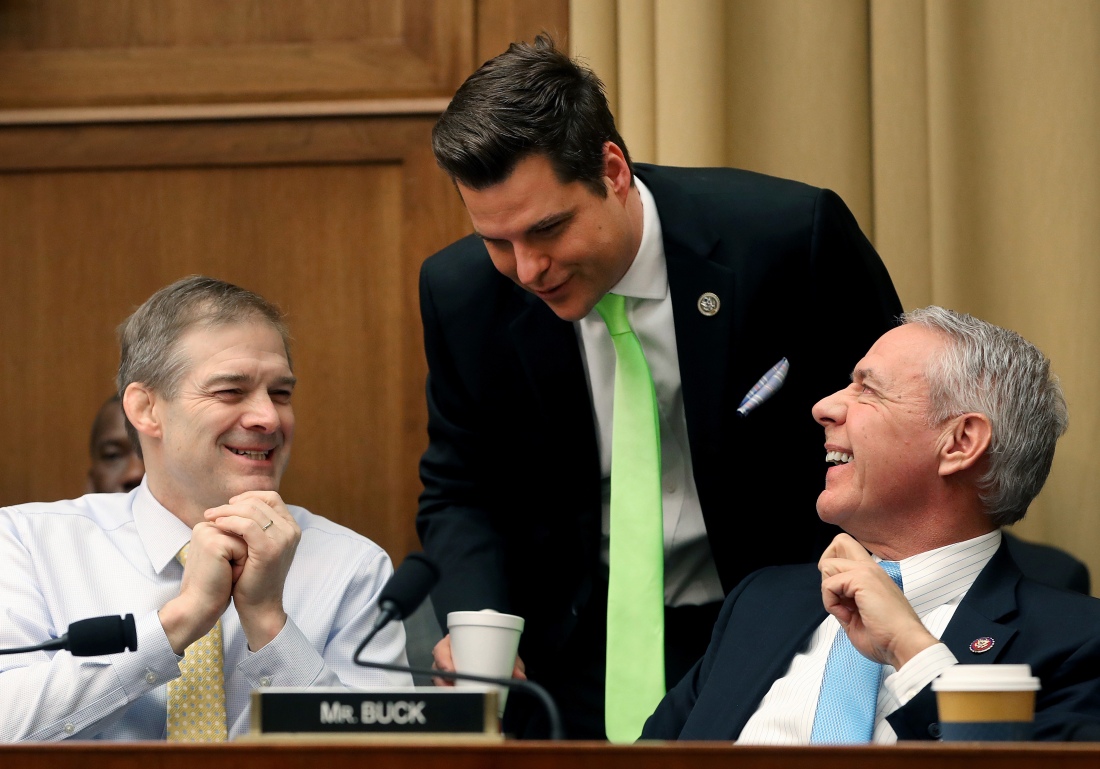 If you need more evidence that their rage is staged, you only needed to watch last night, when they weren’t feigning outrage they were whispering and snickering. These proceedings are a performance for them.

Pardon the language I am about to use. I am old enough to remember Bill Clinton’s impeachment debacle. Year’s of investigations with full cooperation that led to no findings of political or criminal wrongdoing culminated when Linda Tripp came forward to report that a “friend” of hers, a White House intern, 22-year-old Monika Lewinsky, confided that she been having an affair with 49-year-old Clinton, and she kept a sperm stained blue dress as a keepsake.

I am ready for this to the nightmare to end, but no more than those fighting for the constitution. Chairman Nadler has fought tirelessly, and he needs deserves a reprieve. He doesn’t look well.

Today the Judiciary Committee will vote on whether to hold a final vote to impeach. That vote will be scheduled for sometime next week.

Marches are planned across the country the night before that final vote. I hope we turn out in droves. 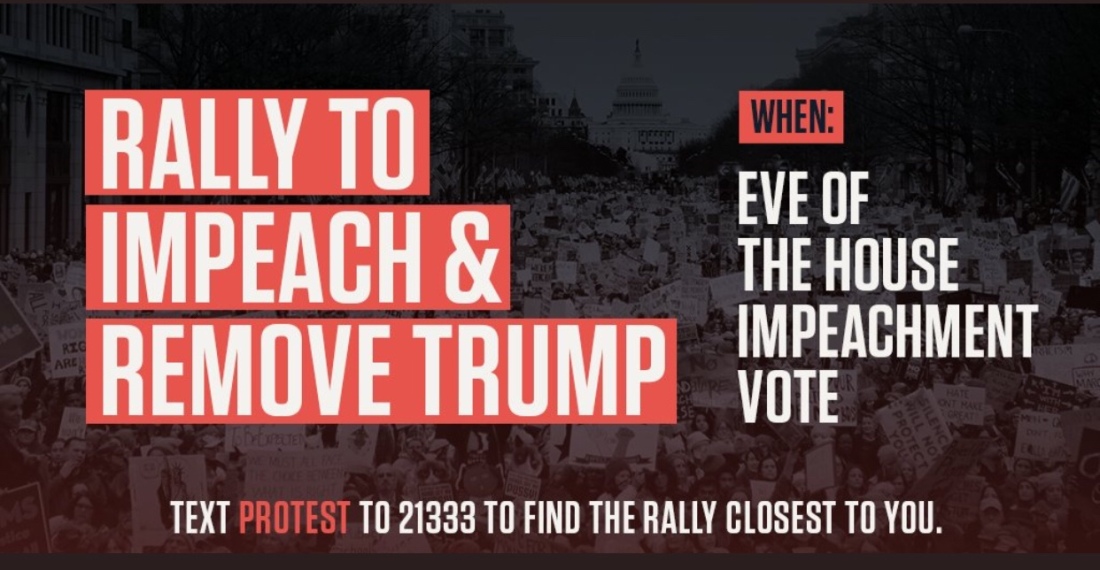 “Nobody Is Above the Law” Events

My champagne is chilling. Thankfully there are more good guys in the House. The vote will go along party lines because Russia owns the GOP. 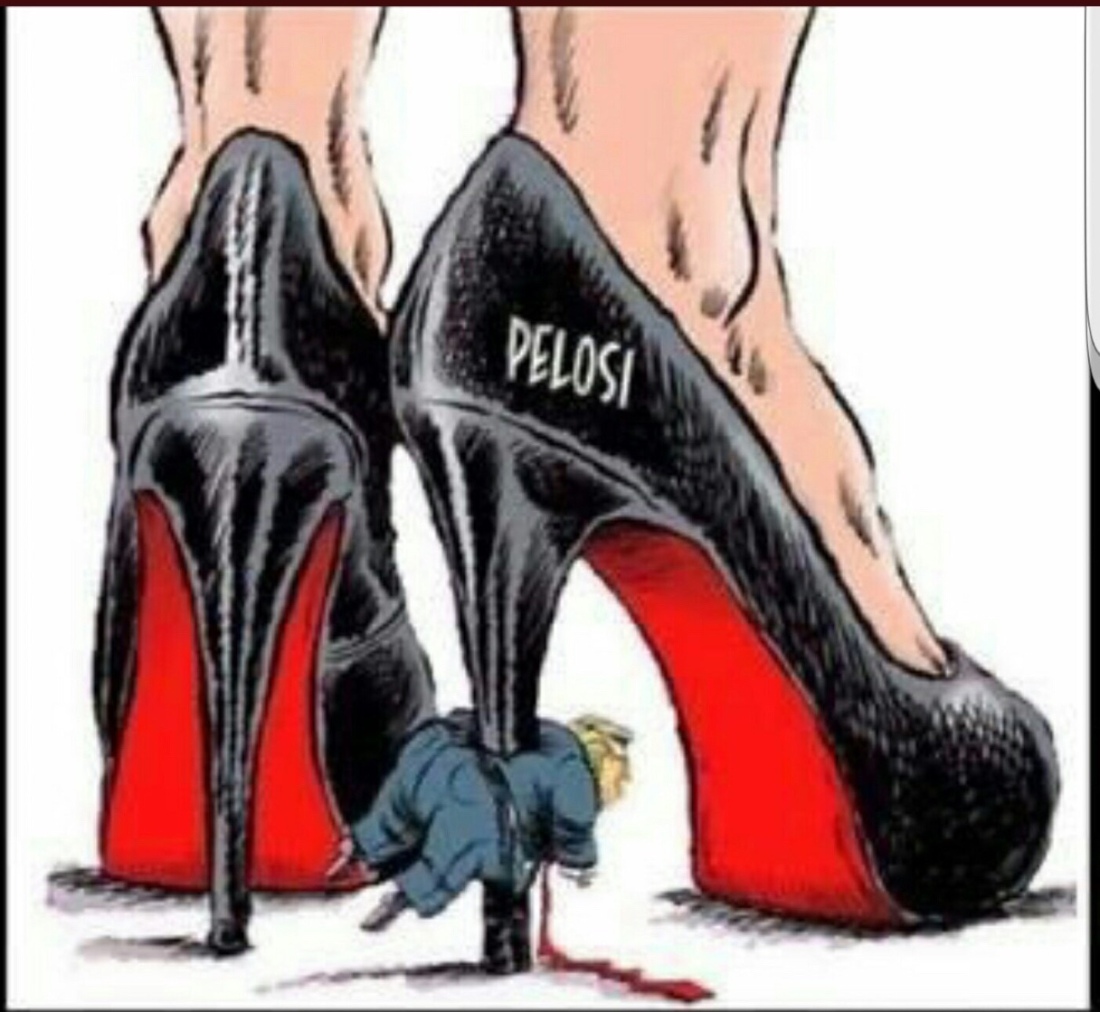 We have yet to hear what Madame Speaker Pelosi plans to do with the impeachment results. Will she continue to investigate until after 2020, or will she send it to the Senate where the GOP majority will end tRump’s impeachment without removing him?

5 thoughts on “Final Lap To Impeach”