The link above includes the full transcript from the first presidential debate for 2020, between Biden and Trump. I challenge you to find one true statement made by the illegitimate squatter. The train wreck we witnessed last night was the first of three scheduled presidential debates. 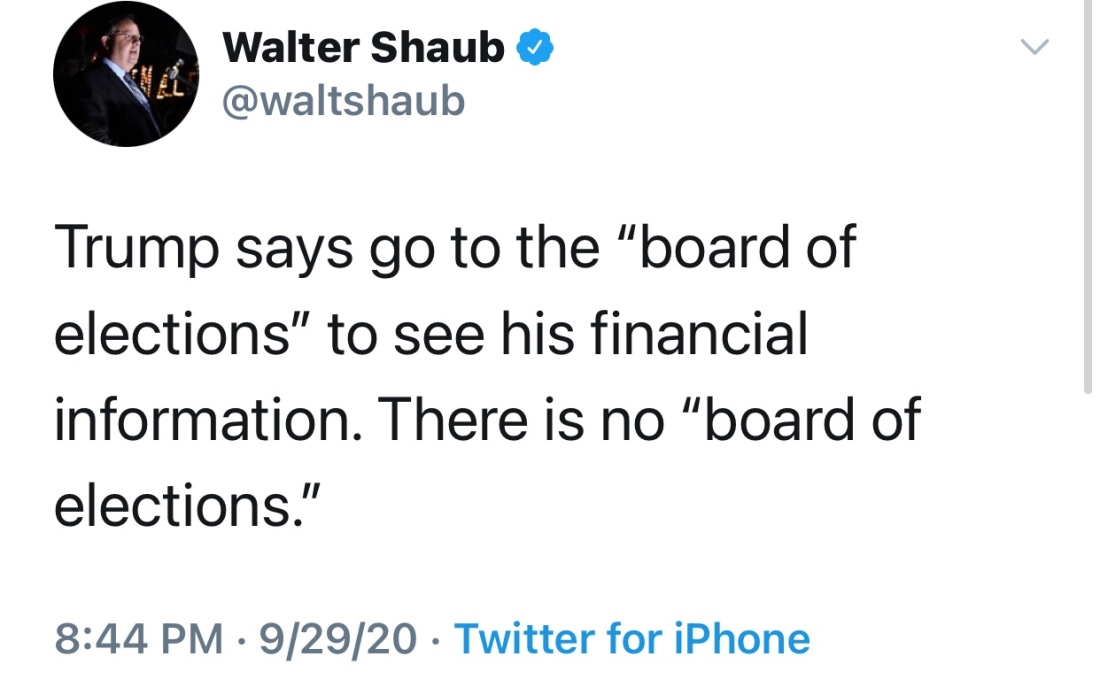 Last night Trump’s primary goal was to keep Biden from being heard. His other goals included taking the focus off of recently released information regarding his personal taxes. He also seemed to be directing his white supremacist followers to interfere with our election process, telling them to show up on Election Day and “monitor the polls.” That is different than asking them to act as an official volunteer “poll watchers.” Translated: he’s telling his gun-toting sycophants to intimidate voters.

Chris Wallace could not have been less effective as a moderator. The corpse from “Weekend at Bernie’s,” would have had the same lack of control over the proceedings. He failed to stop Trump’s constant interruptions, and he often moved on to the next question without giving Biden an opportunity to answer.

*Please read the full transcript, the link is at the beginning of this post. Unless there are quotations I am paraphrasing.

Wallace asked whether Trump would denounce white supremacist groups, like the “Proud Boys.”.

“Okay, boys stand back and stand by.“

This was Trump telling the far-right wing, heavily armed terrorist organization, “Proud Boys,” to “stand by,” be ready to take action on Election Day. It was a call to arms.

The people at Merriam-Webster felt the comment merited a clarification that is in line with my interpretation.

The proud boys certainly took it as such.

“President Trump told the proud boys to stand by cause someone needs to deal with ANTIFA, well sir! we’re ready!!” “Trump basically said to go [eff] them up! this makes me so happy.”

There were other low points of the evening if you could decipher them. Trump confirmed that his rush to confirm another Supreme Court Justice is so the court will swing the election his way.

Trump went so low as to mock the personal struggles of Vice President Joe Biden’s son. Anyone who knows Biden’s family history, and the tragedies they’ve endured should have taken offense at this:

DONALD TRUMP: I don’t know Beau. I know Hunter. Hunter got thrown out of the military. He was thrown out dishonorably discharged.

JOE BIDEN: That’s not true he was not dishonorably discharged.

DONALD TRUMP: For cocaine use. And he didn’t have a job until you became vice president.

JOE BIDEN: None of that is true.

DONALD TRUMP: Once you became vice president he made a fortune in Ukraine, in China, in Moscow and various other places.

JOE BIDEN: That is not true.

DONALD TRUMP: He made a fortune and he didn’t have a job.

JOE BIDEN: My son like a lot of people at home had a drug problem. He’s overtaking it. He’s fixed it. He’s worked on it. And I’m proud of him, I’m proud of my son.

Joe Biden is a good dad. He’s honest and compassionate. There is no bottom for Trump.

If Trump said anything that was true, fact-checkers missed it.

He claimed that he lowered the price of insulin so low, it’s “like water.” He must drink some expensive water.

Fact: “insulin still retails for roughly $300 a vial. On average, diabetics need two to three vials per month if not more.

Biden responded to Trump’s comment “It is what it is,” regarding the 208,000 people who have died of COVID-related illnesses, so far.

“It is what it is because you are who you are.”

At one point, Biden spoke the words that most of the viewing audience was shouting at their televisions:

The evening finally ended with this:

Chris Wallace: would you like to answer his final question?

Biden: I can’t remember all of his rants

Wallace: I’m having trouble myself

I believe this should be the one and only presidential debate for the 2020 election. The remaining two should be canceled because they serve no purpose but to forward lies.

Next week, October 07, we will see the Harris, Pence Vice Presidential debate. Perhaps we’ll hear something during that one.