No deals for pedophiles

Individual 1’s Labor Secretary, pedophile enabler extraordinaire, Alex Acosta, resigned this morning conceding to unrelenting demands by everyone— except the GOP and their pretender president.

The timing of this resignation could not be better, as Accosta’s pet project was to reduce funding to fight sex trafficking by 80%, and to limit victims rights to retaliate. Hmm, why would he do that?

I don’t know if you saw his ”I’m the hero in this story” press conference on Wednesday, but he didn’t sell it to the crowd. Acosta gave immunity to co-conspirators in a sex trafficking network 12 years ago. He buried information linking the participation of prominent politicians, business leaders, attorneys, and others. His deal specified that the terms were ”global” implying that the agreement granted Epstein and his co-conspirators immunity from further prosecution anywhere on this planet. And, he sealed all documents related to the case.

Epstein’s jail sentence terms— not only did his chauffeur pick him up six mornings a week from his county jail suite, for his 12-hour work break, but he was also allowed to travel to the Virgin Islands and New York during his 13-month ”incarceration.” Sign me up for some of that jail time.

Acosta’s Palm Beach deal blindsided Thirty-nine victims. What Epstein’s lawyers negotiated with federal prosecutors was sealed so that no one — not even Epstein’s victims knew the full scope of his crimes.

Investigative reporter for the Miami Herald, Julie Brown is the real hero in this story. She found more than 80 victims whose experiences with Epstein lined up.

*The Miami Herald story ”Perversion of Justice,” by Julie Brown published on November 28, 2019, was the catalyst for reopening this case.

After the Miami Herald story broke, a judge threw out the Epstein/Acosta agreement, ordered documents unsealed, and the case is now in the hands of federal courts in Southern District of New York with victims who were not involved in the previous lawsuit.

I want to throw a couple of statistics at you to illustrate the magnitude of Acosta’s deal:

Today over 100 women had come forward to say Epstein assaulted them when they were children. Based on the statistics listed above, it would be safe to bet the real number of victims is at least 1000.

More in common among these victims is that they have all been threatened, as have their families, and attorneys. Some report having been driven off the road by people on Epstein’s payroll.

Don-the-con’s propaganda machine is hard at work trying to implicate everyone he considers an enemy, but they fail to mention his involvement.

The following is an affidavit from one of Epstein’s recruiters who verifies a victim’s claim that blotus45 and Epstein raped her when she was 13. 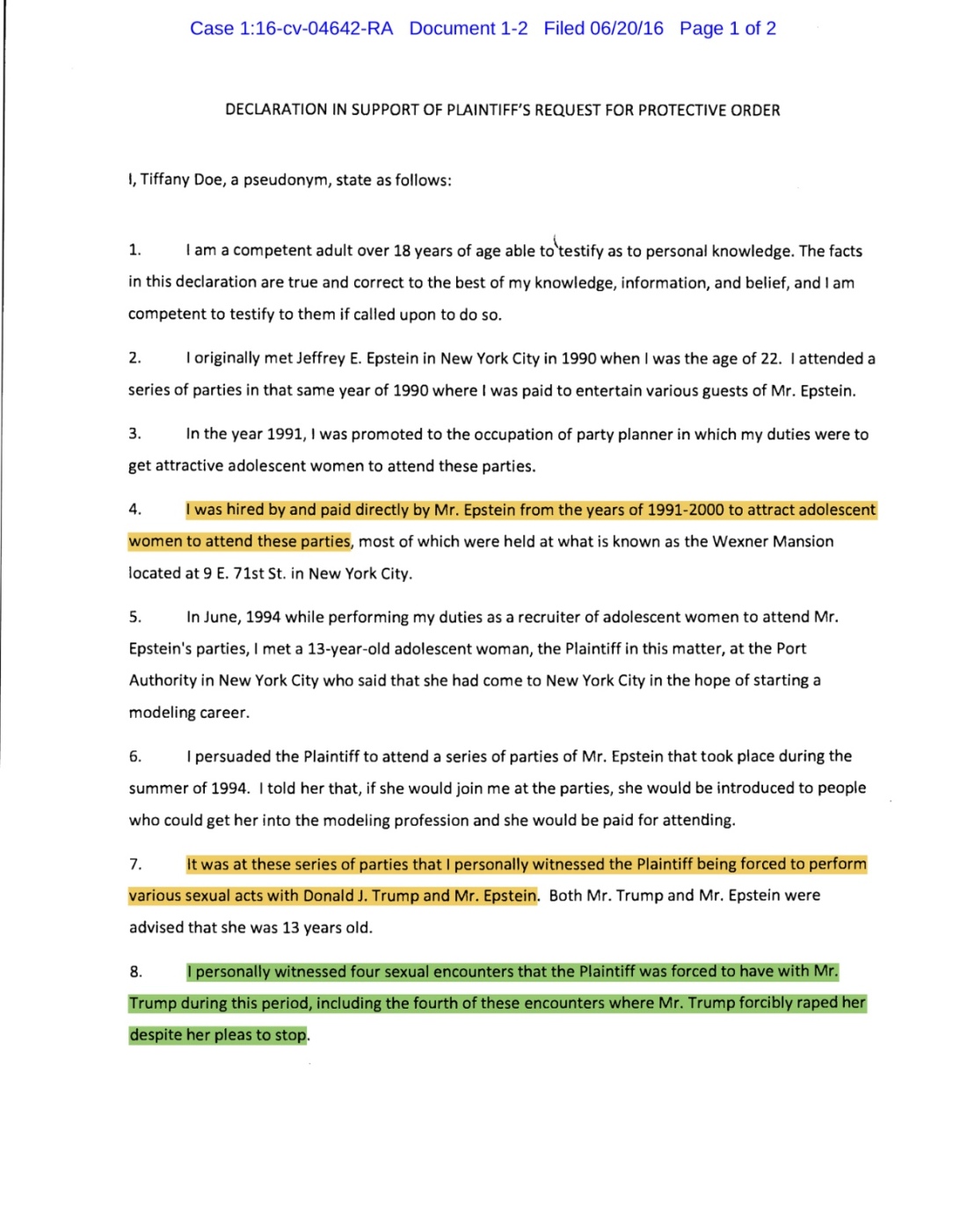 When Epstein was asked under oath whether or not he had ever “socialized” with dRump with underage girls — he pleaded the Fifth.

How many girls did Epstein molest after Acosta signed that plea deal?

Acosta can’t be let off this easy. He must be investigated for criminal conspiracy and for his violation of the Crime Victims’ Rights Act.

Epstein’s lawyers, who include Ken Starr, the former special council who impeached Bill Clinton for lying about a consensual sex act with an adult, are arguing for Epsteins release while he awaits trial, in exchange they’re offering to turn over a passport, an airplane, and the deed to his home. They promise he’ll wear an ankle bracelet.

No deals for pedophiles, please.