Anyone who follows politics must feel the same as I do. Every new breath of hope in our justice system suffers a slow asphyxiation. With each disappointment comes the revelation that around each branch in our government are coiled tendrils of treason; in every seat of Trump’s cabinet, well placed, corrupt players, are seated, and they’ve taken root.

I feel a rising sense of panic caused by the clarity that the 2020 election will see the same manipulations we saw in 2016, those described in The Mueller Report, Part 1.

2020 is fast approaching, and the con is well underway. After almost three years, we have succeeded at nothing to protect our democracy.

What is happening today isn’t new. In March of 2018, the New York Times reported that the State Department had been granted $120 million to combat Russian election interference, $0 spent.

State Dept. Was Granted $120 Million to Fight Russian Meddling. It Has Spent $0.

House Passes H.R. 1 With $1.5B for Election Security – MeriTalk

…would then go to the Senate for a vote, and if passed it would need to be approved by a president.

It was generally understood that the House bill would be vetoed when it got to the… (I can’t say it), Trump, but it did not get that far. Because of Mitch, the Senate never had a chance to vote on H.R. 1. Senate Majority Leader, Mitch McConnell brazenly blocks all legislation the House passes his way, with particular vehemence when it pertains to safeguarding our elections.

Trump’s updated for 2020 “Rusherrr, if you’re listening…” moment comes during his ABC interview with George Stephanopoulos. Trump claims it is perfectly normal to accept help from foreign adversaries. He is normalizing the idea of conspiring with an enemy to attack our democracy.

Trump has been tweeting results of a poll, posted by the right-wing propagandist network, which gives him a 51% approval rating. This lie and the repetition of it will serve to set us up for the next election. Trump will cheat and, when he wins despite widespread disapproval, he’ll deny interference citing the invented polls as proof that he had the support of a majority of voters. 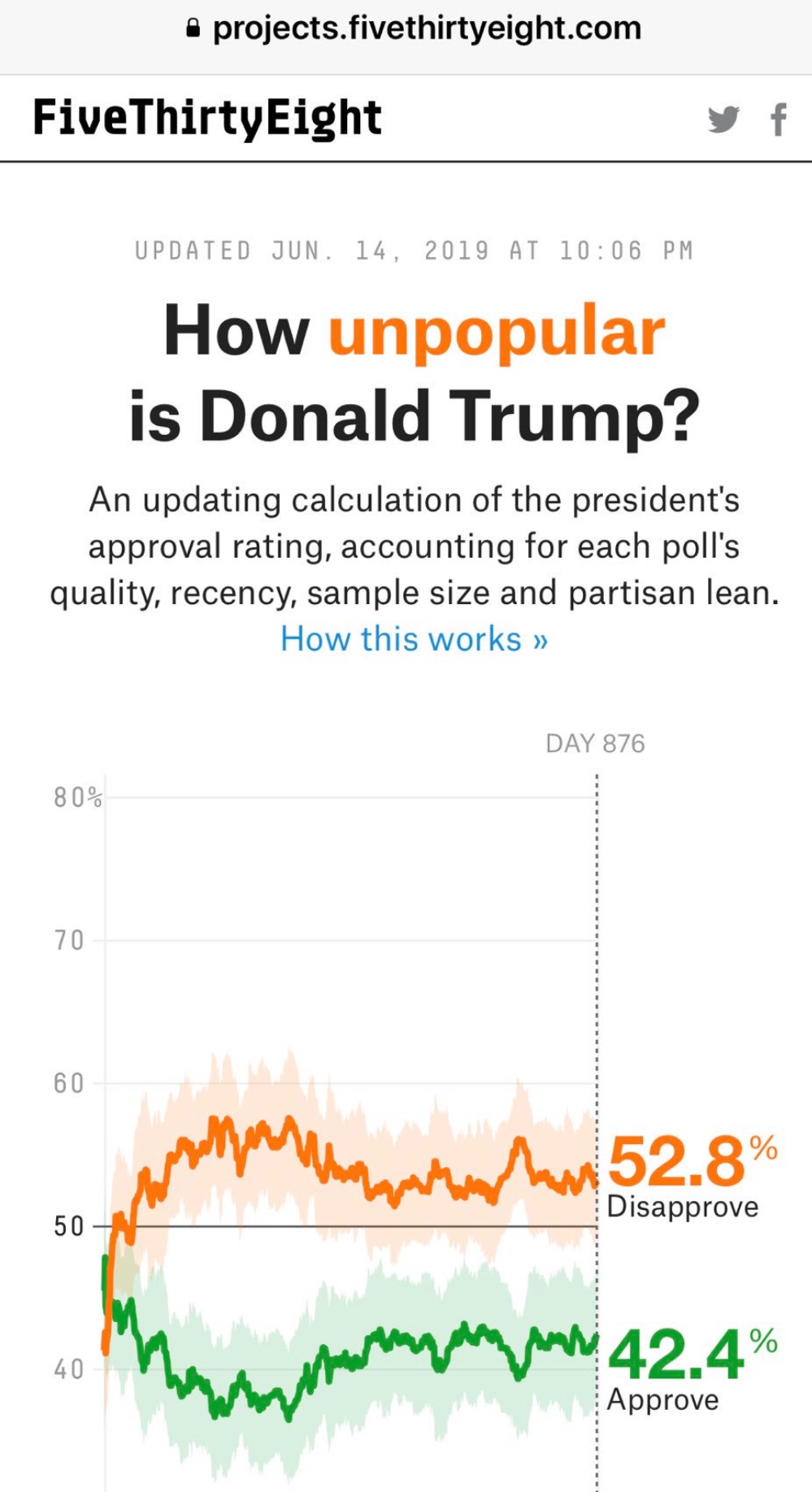 Trump is not unaware that people are catching on. Many predicted he would start a war if threats of impeachment or removal from office picked up.

And then came an attack on the Gulf of Oman.

Pompeo is lying. We’ve gone down this road so many times in history, but all is forgotten, except by criminals looking for ideas.

The Spanish-American war of 1898 is an example of war waged on a lie, but we don’t have to go back that far in American history to see a pattern.

Donald Trump and the bone-saw wielding Saudi Prince Mohammed bin Salman, are perfectly willing to line up our children as pawns to wage war under pretenses.

We are being played.

The government isn’t bothered by those of us who are suspicious of what they’re doing, because the majority of Americans are not paying attention; they’re busy working overtime, living paycheck to paycheck, trying to cover medical bills and feed their families. This is by design.

US, Russia not among 50 nations pledging to fight cybercrime

Trump has aligned US policies with Russia’s interests and has made adversaries of our allies.

The Daily Beast writes about Trump’s Department of Homeland Security gutting the task forces that were in place to protect our elections from foreign meddling:

“It’s very curious why the leadership has not committed resources to prepare for the 2020 election,” one DHS official tells The Daily Beast.

It’s not curious at all. It is evident to anyone paying attention.

Remember, Ivanka Trump has acquired trademarks from China for voting machines. What could be a more blatant indication that they’re setting us up?

Remember Helsinki? Trump’s tweet after his secret meeting with Putin:

What the Hell are we going to do?

My hope rested on the shoulders of Special Counsel Robert Mueller. I still believe he is a hero, but I didn’t expect him to walk away. I think we will learn his investigation was cut short. We know Attorney General Bill Barr has repeatedly tried to bury the contents of the report, so that wouldn’t be a shock. He successfully convinced many that the report exonerated Trump by presenting his version, a lie, and letting it simmer for three weeks before releasing Mueller’s work.

Mueller gave us what we need, but so much has been buried under thick black lines, and what wasn’t has been ignored because so few people have read the report and so many believe the false reports of what it contains. We will find out who the redactions are protecting at some point, but will it be too late?

The dark cloud looming overhead is a threat of the end of American democracy.