During the past few days, Donald Trump and his administration have made some alarming moves. I’m not talking about Trump’s (middle school) work with Guiliani to spread videos of Speaker Nancy Pelosi, that have obviously been doctored, substantially slowed down or spliced, to make her appear drunk or dim-witted. (Both Facebook and Twitter refused to remove the video.) Trump’s retaliation against Pelosi was triggered by her words ”we believe the President of the United States is engaged in a cover-up.”

She also said that his family and staff should have an intervention.

Later: Journalist Glenn Thrush asked Pelosi: “Can you explain the comment you made about staff making an intervention.”

Speaker Pelosi responded: “Statutory intervention? That would be good. Article 25, that’s a good idea. I’ll take it up with my caucus, not that they haven’t been thinking about it.”

Trump called a press conference; he has resorted to calling her crazy and telling the press she isn’t the same person she was when he met her because she has deteriorated mentally. (He used monosyllabic words and grunts to express himself.) Donald Trump attacks his critics. We knew that. 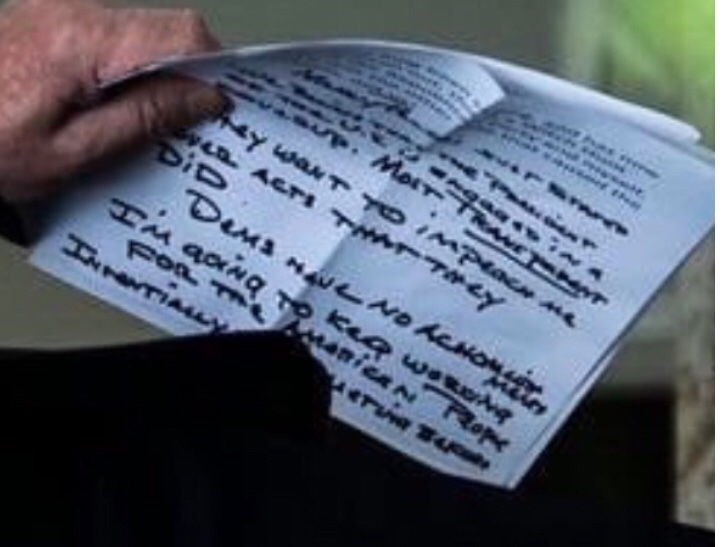 *Trump’s press conference notes. “Dems have no achomlishments.” At the end of the speech, he reaffirmed his belief that he is an extremely stable genius.

As disturbing as Trump’s treatment of Speaker Pelosi is, what has me worried is unrelated.

Trump has given Attorney General Bill Barr the broad power to declassify government secrets, to declassify everything related to the Russia investigation. His motivation is to investigate the investigators, punish them for doing what they’re supposed to do. He went further, accusing former FBI officials of committing treason, a capital offense.

Reporter: ”The Constitution says treason is punishable by death. You’ve accused your adversaries of treason. Who specifically are you accusing of treason?”

Or is it? Article III, section 3, of the Constitution defines treason as such:

“Treason against the United States shall consist only in levying war against them, or in adhering to their enemies, giving them aid and comfort. No person shall be convicted of treason unless on the testimony of two witnesses to the same overt act, or confession in open court.”

Trump’s behavior is consistent with his pattern of accusing others of crimes he has committed.

Is this democracy? No, this is authoritarianism.

Speaking of inappropriate, Attorney General Bill Barr is in contempt of Congress. He was a no show when subpoenaed to appear for questioning by the House. In my opinion, he should have been arrested. The standard punishment for anyone else would be jail or a fine up to $25k per day. I believe taxpayers would pay any fine, so prison is the better option.

Thursday, the House was scheduled to vote on what action they would take against Barr for his offense, he tried to bargain in the 11th hour. He said he would turn over the evidence and an unredacted copy of the Mueller report. Democrats capitulated. We shall see what he gives Congress, but I wouldn’t bet on it being what he offered.

Oh, there is one other item in the news that concerns me. Secretary of State Pompeo, Mike Pompeo confirmed an $8.1 billion arms sales to Arab nations without Congress approval to ‘deter Iran.’

Trump also ordered Don McGahn to ignore his subpoena to testify for Congress, and McGahn did it ignore it.

Trump is rejecting the role Congress plays as a co-equal branch of government because their work threatens to expose his criminal behavior.

The time has come to storm the castle.

4 thoughts on “Trump and that low Barr”