The news of Carrie Fishers death saddened me, but when I realized her mother has survived her I was heart broken. Singing in the Rain, Tammy and the Bachelor, The Unsinkable Molly Brown—all starred Carrie’s mom—Debbie Reynolds. I’m not sure if my children have ever heard of her, but I grew up watching her old films on my parents console tv. She was America’s sweetheart, and has had more than her share of devastation. No one should have to bury their child—even if the child is 60 years old. Carrie Fisher also entertained me in my youth. Feminist Princess Leia led the rebellion in Star Wars…those films I saw in theaters.

In addition to her film career, Carrie Fisher’s real talent was writing. She wrote several semi autographical novels, infused with dry humor, in which she not only shed light on her life—far more interesting than any film, but she bravely disclosed her personal struggles with addiction and living with bipolar disorder in a time when those things were not discussed. 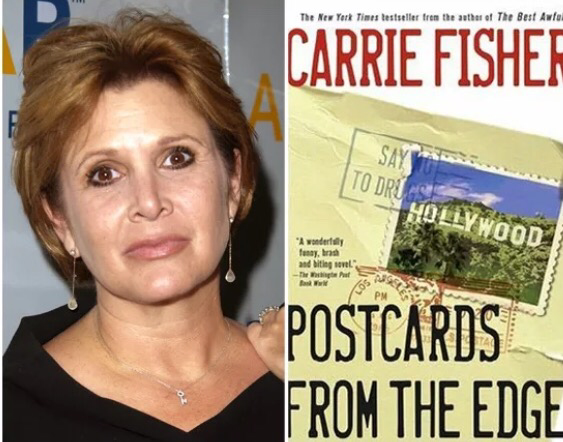 Carrie Fisher was a pioneer in her personal writings on the subject, and to some extent she diminished the stigma of mental illness, inspiring others to share their own struggles.

I recently read a statistic that 18 percent of the adult population suffers from some form of mental illness: conditions ranging from panic disorder, depression, bipolar disorder, schizophrenia,  etc. The number is surprising because many people still suffer privately for fear of how it will change the way they’re treated.

Carrie Fisher was not just the bipolar child born of a Hollywood couple, she was an actress, a writer, a daughter, sister, mother— but her legacy might be that she gave sufferers of mental illness the courage to fight, and she helped the world understand— mental illness is not a failure, or a weakness, it’s a disease that doesn’t discriminate, and most importantly it doesn’t have to define you.

“Resentment is like drinking poison and waiting for the other person to die.”

“Youth and beauty are not accomplishments. They’re the temporary happy byproducts of time and/or DNA. Don’t hold your breath for either.”

“Two of the saddest words in the English language are, ‘What party?'”

“I have two moods. One is Roy, rollicking Roy, the wild ride of a mood. And Pam, sediment Pam, who stands on the shore and sobs… Sometimes the tide is in, sometimes it’s out.”

“Stay afraid, but do it anyway. What’s important is the action. You don’t have to wait to be confident. Just do it and eventually the confidence will follow.”

“I’ve never been ashamed of my mental illness…it never occurred to me. Many people thank me for talking about it, and mothers can tell their kids when they are upset with the diagnosis that Princess Leia is bipolar too.”

“I drowned in moonlight, strangled by my own bra.”