It was surprising when Attorney General Bill Barr recused himself from Jeffrey Epstein’s sex trafficking case early Tuesday morning. Barr is unethical, but conflicts of interest haven’t stopped him yet. In the 1980s, Bill Barr’s father hired Epstein, a college dropout, to teach math at Dalton, a prep school in New York. More recently, Epstein engaged the services of a law firm where Bill Barr was employed.

It was not surprising when, a few hours after announcing his recusal, Barr announced he would not recuse himself. What changed?

This change of plans reminds us that Bill Barr lacks the requisite integrity to fulfill his job as Attorney General of the United States. As per the job title, Bill Barr is the chief law enforcement officer in the country. He does not enforce the law. Barr acts as Trumplethinskin’s personal attorney instead. He uses the seat of Attorney General to protect his client and kill investigations that threaten him.

Barr successfully diminished the impact of the Mueller Report, by lying about its findings, and withholding it while his lies marinated.

Since Mueller’s investigation was cut short, Bill Barr has blocked 10 of 14 cases resultant from the evidence of criminal activity that Mueller discovered and referred to other prosecutors or FBI officials because they did not fall within the scope of his investigation.

Per Barr’s to do list, his efforts today focus on preventing Mueller from testifying before Congress next week. Barr has put a lot of effort into blocking testimony in a case that shows ”no collusion, no obstruction.” 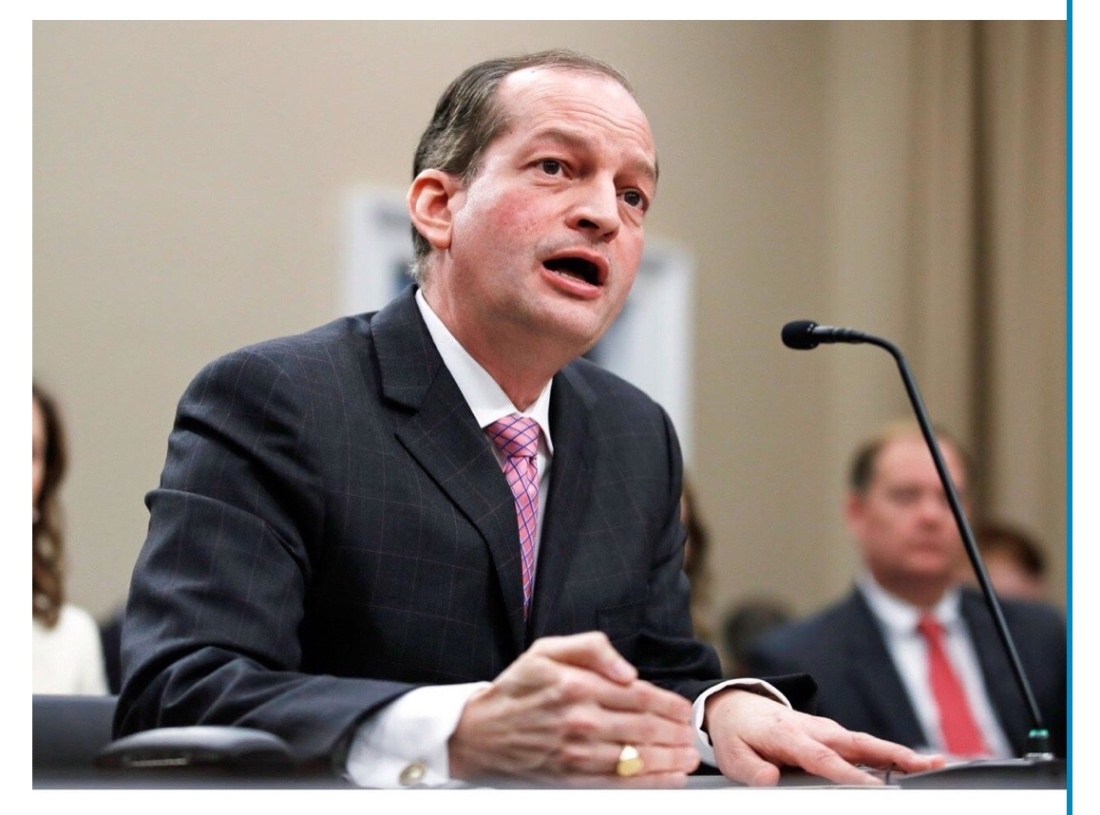 The orange ogre has filled his cabinet with people who will protect him from his crimes. His Secretary of Labor is not an exception. Pedophile enabling Labor Secretary, Alex Acosta is under fire for letting Epstein walk away from life in prison. Acosta was the Florida federal prosecutor who helped concoct Epstein’s sweetheart plea deal in 2007.

Acosta granted Epstein work release with his prison sentence, which allowed him to come and go 12 hours a day, six days a week. The time he was incarcerated was spent in a private wing of a county jail, not state prison, and he was under the protection of a personal security guard. He served 13 of his 18-month sentence.

Acosta violated the rights of Epstein’s victims by not notifying the victims of the arrangement first. The deal was illegal and unethical and voided by a judge last month.

Acosta’s work for pedophile Epstein gave him the ideal resume for Mango Mussolini’s Department of Labor. The United States Secretary of Labor oversees sex trafficking. Acosta is seeking to diminish the rights of and weaken the protections for victims of sex trafficking, and drastically cut funds that combat human trafficking, child labor, and forced labor. Acosta should be worried because new public awareness of his history does not bode well for his future. Calls for his resignation are widespread, except among the GOP members of Congress.

Hair Führer and Jeffrey Epstein have a long, sordid history. They have been photographed together as far back as the ’80s.

Alan Dershowitz is one of Epstein’s attorneys. One victim claims she was forced to have sex with Dershowitz on at least six occasions.

Benedict Donald’s name, as well as the names of Bill Clinton, Prince Andrew, Alan Dershowitz, many prominent businessmen, and politicians, are listed in flight logs for Epstein’s private jets, nicknamed the Lolita Express.

The toupee’d tyrant, a regular at Epstein’s infamous sex parties is accused of raping a 13-year-old girl at one such party in 1994. The rape was witnessed by one of Epstein’s recruiters who signed a sworn statement as such. The story is also corroborated by two women whom the victim confided in at the time. She dropped the case before the 2016 election after receiving numerous death threats but has filed again since Epstein’s arrest.

How would Donny Two-Scoops, categorize his relationship with Epstein now, with his habit of revising history? Trumpigula has decided not to know Epstein.

”We had a falling out about 15 years ago. I’m not a fan.— I feel very badly, actually, for Secretary Acosta.” ~The Lyin King

He feels ”badly” for Acosta who sealed all documents and set a serial sex trafficking pedophile free, helping him avoid federal charges, without telling the 40 women who came forward. Individual 1 feels nothing for the victims.

Epstein’s attorney is arguing— no take-backs. This time is different; it isn’t Florida. The Southern District of New York has a conviction rate on federal charges for human trafficking of over 90%. With that knowledge, it’s fair to assume that enough corroborating evidence exists for a conviction.

Investigators found a stash of nude photos in Epstein’s NY home during a raid on Saturday. They will likely seize the property.

Barr will interfere with the Epstein case, how remains to be seen. His primary objective is to protect Twitler. He will likely try to keep the case from going to trial, in which case Epstein’s rich and powerful co-conspirators and enablers, including the angry yam, will be exposed.

New Jeffrey Epstein accuser: He raped me when I was 15

New victims are stepping up, ending the argument that this case was settled a decade ago. Epstein’s imprisonment might lend courage to some victims who have yet to come forward. 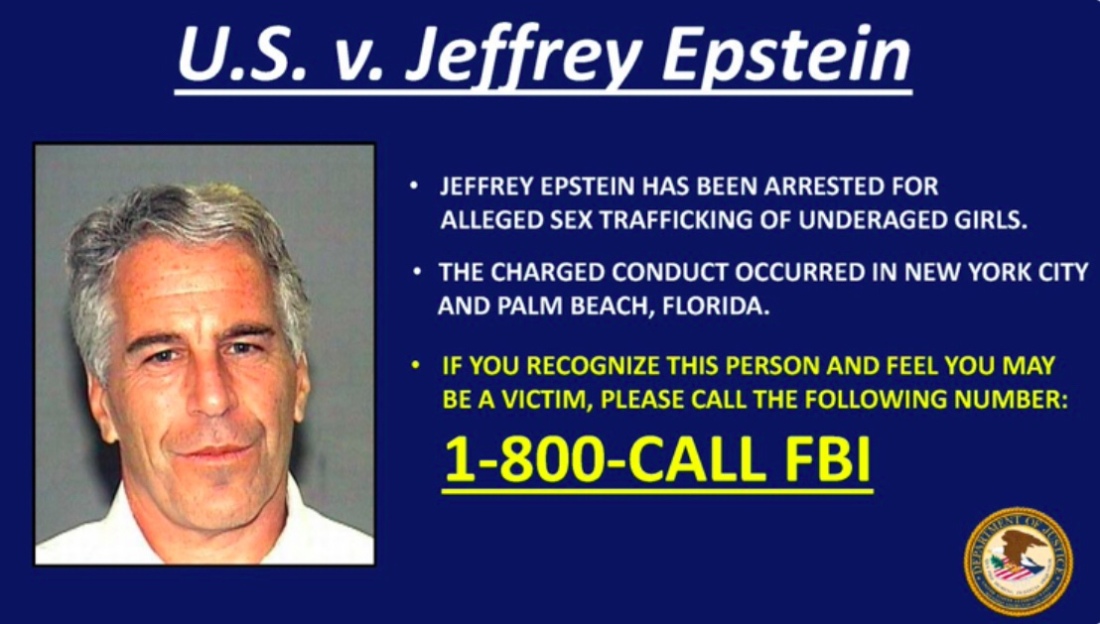 Every day with 45 is worse than the last. Don-the-Con has committed every crime imaginable, so why aren’t we impeaching?

Trump once hosted an exclusive party with Jeffrey Epstein at his Mar-a-Lago estate, a new report says. It was just the 2 of them and ’28 girls.’

All the assault allegations against Donald Trump recapped

3 thoughts on “Epstein, Acosta, Barr, and the Unindicted-Co-Conspirator”