Trump has two arguments against allowing his former National Security Adviser, John Bolton, to testify, and of course, they contradict each other. Trump calls Bolton a liar in one breath and then attempts to block the publication of his book, claiming it contains “top secret information.” Are they top-secret or are they lies— or perhaps they’re top-secret lies? 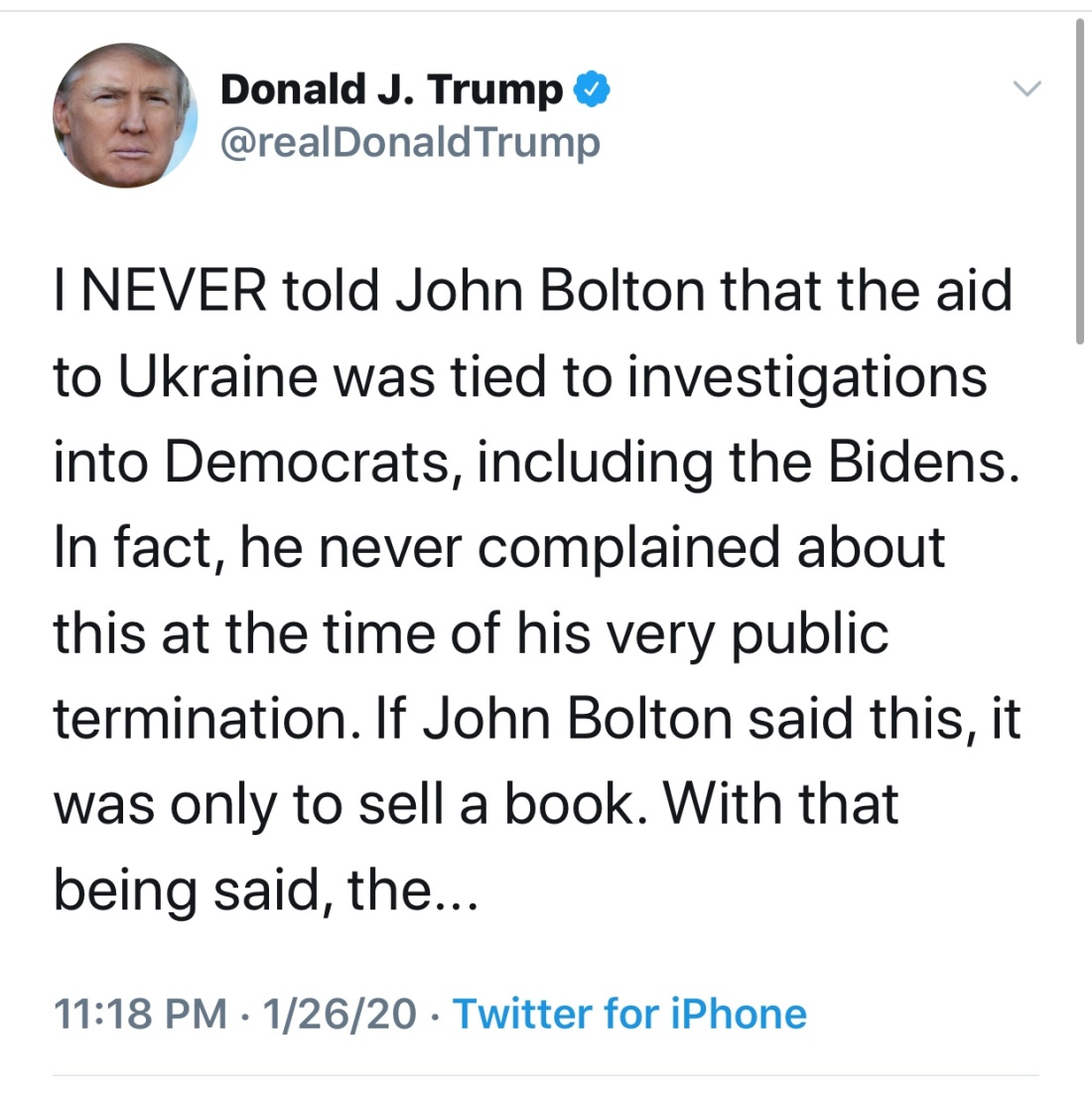 This is the letter Trump’s people sent to Bolton’s people. 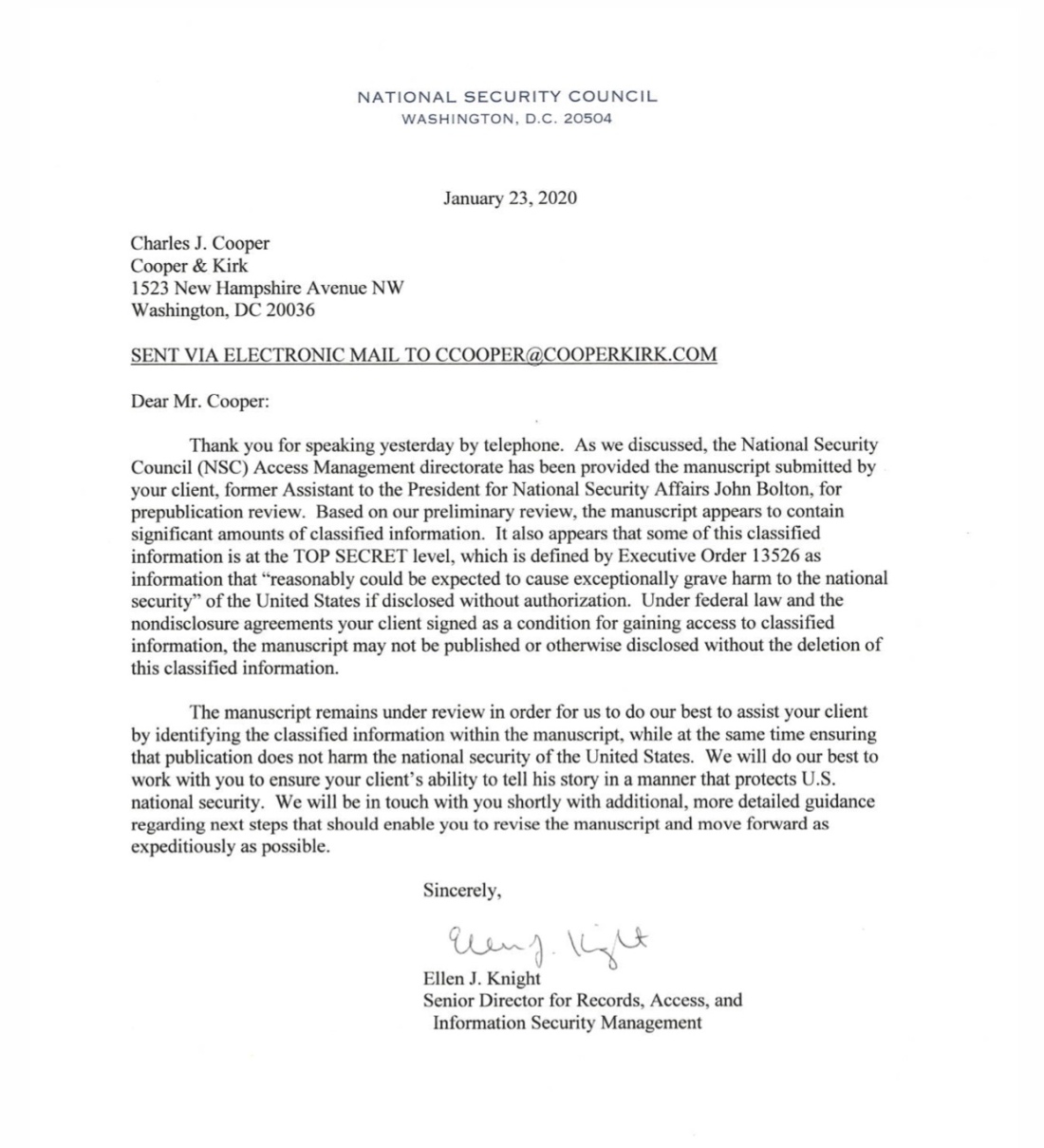 I am again insulted on behalf of everyone Trump thinks he’s fooling.

Today will be day two of the question-answer portion in Moscow Mitch’s format of the impeachment trial. Senate members will again ask questions of the House Impeachment Managers and Trump’s defense team.

The most stunning argument in yesterday’s questioning came from Trump’s lawyer Alan (Captain Underpants) Dershowitz who claimed that Trump’s use of any means available to him, to remain in power as president, is for the good of the nation, and as such, perfectly fine. There are no boundaries, not extortion, bribery, or murder if Trump thinks he’s right.

This argument is bullshit:

A recent Quinnipiac poll shows 75% of registered voters want the Senate to call witnesses in Trump’s impeachment trial. Hello Senate, these are your employers talking.

If you watched any of the trial yesterday, listened to questions, and considered who was asking who which questions, you probably noticed the Senate is still divided along party lines. If the press is correct, we are relying on Mitt Romney, Lisa Murkowski, and Susan Collins, to vote with Democrats- which would be a 50/50 tie that Justice Roberts would have to break, just to hear witnesses.

If Sondland, Rick Perry, and Kurt Volker’s are the three amigos of Trump’s Ukraine extortion “drug deal,” as John Bolton called it, then Senators Romney, Murkowski, and Collins could be named the three blind mice, or are they the three wise monkeys who hear, see, and speak no evil. Either way, if the U.S. is counting on these three senators to save democracy, it’s over. Please throw your popcorn containers in the trash receptacles as you exit the theater. 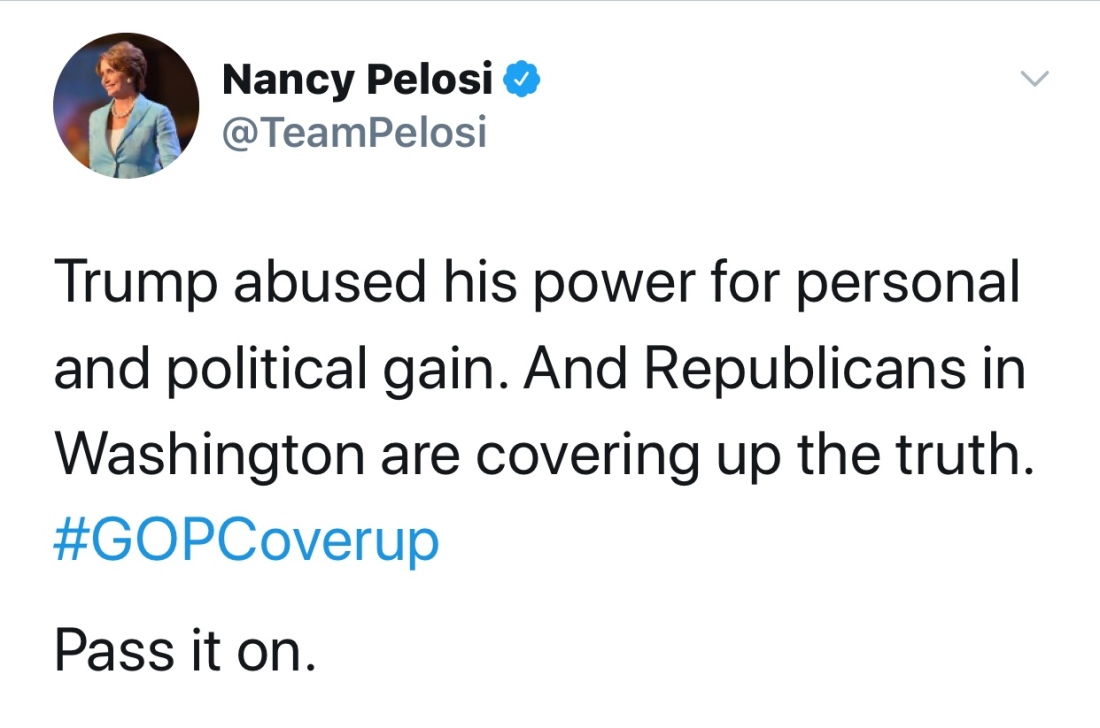 Moscow Mitch McConnell wants this trial to end with Trump’s acquittal before this Sunday’s Super Bowl, before more criminal activity comes to light.

You may think I’m an alarmist, and I may think that if you’re not alarmed you are not paying attention. The GOP has created a monster who will destroy us all.

If Trump is acquitted the GOP will have unleashed the beast. He will go, full-on tyrant, emulating the dictators he most idolizes. The free press will end, healthcare will be only for the richest among us, social security will disappear. We will never see another fair election. The criminals he has pardoned will stand by his side as he rules. The presidency will eventually be passed on to each of his evil spawn, and once the U.S. completes the empowerment of Putin he will destroy us.

I’m angry. I’m most angry at the GOP, but I’m also angry at those who thought it would be a good idea to vote for a reality TV show host/real estate con-man who filed bankruptcy more often than he dodged the draft, a man who bragged about sexual assault, a man who mocks the disabled, a cyberbully. Those acts were committed before he stole the election. The atrocities he has committed since his inauguration, (which had very low attendance,)

are nothing compared to what he’s done in office. His crimes against humanity are as vast as his hypocrisy is astounding. All but one of his children and two of his wives would be deported if his rules applied to everyone.

I don’t expect the GOP to call witnesses, or to convict Trump. And I don’t expect to have a fair election again. How can we trust our votes to be counted if we have unrepentant cheaters in office?

Our only hope is to vote in record numbers.

We are an apathetic group. Look at these statistics:

We are fortunate to live in a country where citizens, in theory, elect their officials. Our vote is a privilege that has been fought for.

I think fines should be issued to eligible voters who don’t do their civic duty. Other countries do this.

Register, or check to make sure your voter registration has not been purged at vote.gov.