After only two months of a formal impeachment inquiry, and only two weeks of public hearings, the House Intelligence Committee issued its impeachment report on President Trump.

In that short period, Intelligence Committee Chairman Adam Schiff did what Bob Mueller was not able to do, present the public with compelling proof of tRump’s impeachable behavior in a condensed 2019 attention span timeframe.

Speaker Pelosi recently reminded us that in 1787 Benjamin Franklin was asked what kind of government we have, he said,

“A Republic if you can keep it.”

Whether or not we can keep it may be determined this week.

“Oh my god, this is terrible. This is the end of my presidency. I’m f*cked!” ~tRump

“The evidence of the President’s misconduct is overwhelming, and so too is the evidence of his obstruction of Congress. Indeed, it would be hard to imagine a stronger or more complete case of obstruction than that demonstrated by the President since the inquiry began.” ~ Intelligence Committee Chairman Adam Schiff

Meanwhile, the guy with the nuclear codes said:

“Right now in a number of states the laws allow a baby to be born from his or her mother’s womb in the 9th month. It is wrong. It has to change.”

“We have a situation where we’re looking very strongly at sinks and showers, and other elements of bathrooms, people are flushing toilets 10 times, 15 times, as opposed to once.” Said the turd that won’t flush

There is a consensus among legal scholars and attorneys that the House should impeach tRump now but NOT send it to the Senate. They should continue investigating and add supplemental articles to their report as more evidence is found. This would allow the court time to rule on whether subpoenaed witnesses must testify.

The House can impeach Trump but not name the impeachment managers, which would trigger the trial requirements, which are the Senate’s responsibility.

The House is forcing tRump to make a decision. Now that Nancy Pelosi has called for Articles of Impeachment to be drawn up, tRump will resign, or he will be impeached in the House.

I had written that if tRump doesn’t resign before his imminent impeachment, he’ll no longer be eligible for pardons, meaning this is a big decision coming down to the wire. Now I find this is a debated subject. Here is Robert Reich’s take on it, and a link to the Newsweek article it’s taken from. 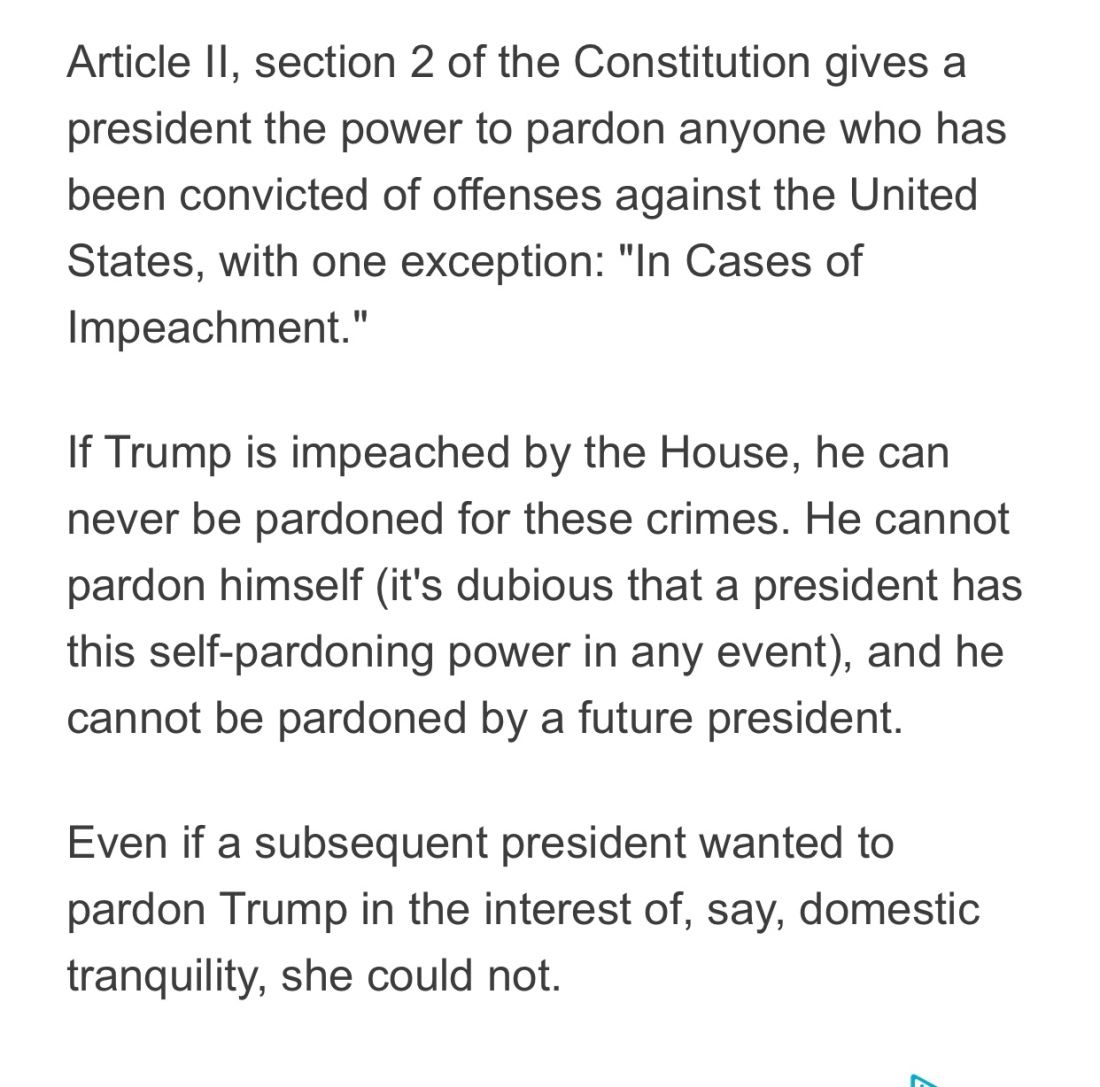 Robert Reich: If impeached by the House, Trump is literally unpardonable | Opinion

If he’s impeached, the crime he was impeached for cannot be pardoned by another president meaning after he leaves office he can be charged officially. Regardless of what the Senate does. What do you think he’ll do?

House Intelligence report on Trump is scathing — but who cares? The election is what matters