Alphonse Gabriel “Al” Capone, aka Scarface, was an American gangster, boss of the Chicago Outfit who attained notoriety during the Prohibition era. His crime syndicate, it is estimated, pulled in over $100 million a year by means of bootlegging, gambling, prostitution, racketeering and other illegal activities. 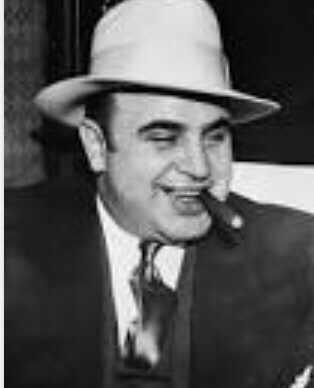 Public speculation has it that Capone was the mastermind behind the Saint Valentines Day massacre in 1929, when seven men affiliated with the George “Bugs” Moran gang were shot to death while lined up against a wall inside a garage in Chicago’s Lincoln Park neighborhood. He was never charged.
Capone ordered hits on a multitude of enemies, controlled a criminal empire but avoided prosecution for years by paying off police and public officials and threatening witnesses. His first criminal conviction was in May 1929 when he was arrested for carrying a concealed weapon and sentenced to a year in prison.

In April 1930, a free man, Capone was named Public Enemy No. 1. On the Chicago Crime Commission’s first list of the city’s worst criminals. 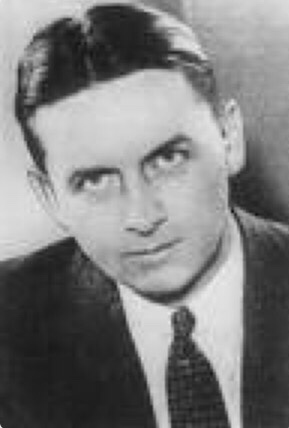 Not until a Chicago prohibition agent, Elliot Ness, and his team of feds built a case against the crime boss was he charged, but not for murder, bootlegging, gambling, prostitution, racketeering or any of his other illicit activities. Al Capone’s kryptonite was income-tax fraud.

Of the more than twenty counts that were filed against him, Capone was found guilty on five charges: three felonies and two misdemeanors. His sentence, the longest to date for tax fraud, 11 years behind bars and a fine of $50,000. He was incarcerated from 1934 to 1939.

Once freed, Al Capone was among the first people to be treated for an STD (syphilis) with antibiotics. Although he underwent several months of treatment it was too late to cure him. In January 1947, at the age of 48,  Al Capone suffered a stroke, came down with pneumonia, and died. Like Al Capone, Trump has been linked to a variety of crimes, and has been rumored to have ties to organized crime. His businesses have been involved in 3,500 legal cases in U.S. federal courts and state courts. Trump or one of his companies were plaintiffs in 1,900 of the court cases, defendants in 1,450, and 150 were related to one of his six corporate bankruptcies, third party, or other cases. Trump was personally named in at least 169 suits in federal court.

There have been lawsuits regarding contract disputes, defamation claims, and at least fifteen women have alleged sexual misconduct against Trump.

Although he has said he “never settles out of court”, he has settled over 100 times—as he did when accused of defrauding more than 5,000 people of $40 million for for Trump University.

Like Capone’s Saint Valentine’s Day massacre, public speculation has it that Trump may have been the mastermind behind the Bowling Green massacre, but he has yet to be charged. (That was a joke) But, this really isn’t funny.

Trump, like Capone, doesn’t pay taxes. “That makes him smart.” but not smart enough—his companies have been involved in more than 100 tax disputes, and on at least three dozen occasions the New York State Department of Taxation and Finance obtained tax liens against Trump properties for nonpayment of taxes and fraud. In 2013, in another such lawsuit was filed by New York Attorney General Eric Schneiderman.

As president, Donald Trump has repeatedly violated the emoluments clause by maintaining his business holdings regardless of conflicting interest concerns. This is an example of how rules don’t seem to apply to Donald Trump.

But—Donald Trump has his own kryptonite in his ties to Russia. Colluding with Russia to undermine the presidential election…that is an impeachable offense. Now all we need is Eliot Ness. 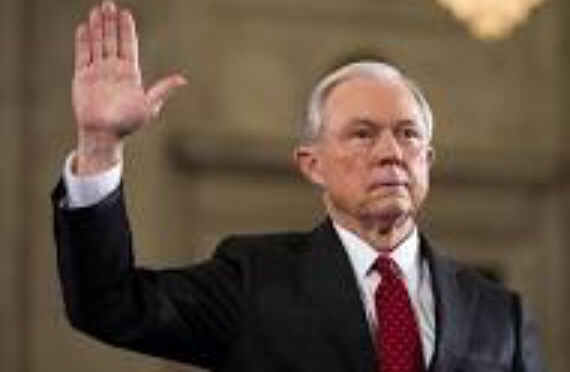 Enter Jeff Sessions, who may fit into the roll of the man who takes Trump down (inadvertently) as it comes to light that he had several contacts with Russia which he denied when questioned under oath during his senate confirmation hearings. This makes Jeff Sessions guilty of  perjury.

The Washington Post reported today: “One of the meetings was a private conversation between Sessions and Russian Ambassador Sergey Kislyak that took place in September in the senator’s office, at the height of what U.S. intelligence officials say was a Russian cyber campaign to upend the U.S. presidential race,”

As more evidence is compiled, and more members of Trump’s cabinet are exposed, Trump’s ties to Russia are becoming more difficult to ignore.

So, to fill in the blank: Tax Fraud is to Al Capone what Treason is to Donald Trump.