Remember the phone call that ignited the impeachment process? Specifically, do you remember the part when tRump spoke to Ukraine President Volodymyr Zelensky, about former Ukraine Ambassador Marie Yovanovitch?

In that call, with several people listening in, he said she’s “bad news.”

“She’s going to go through some things,”

We heard about that on November 15, at tRump’s impeachment inquiry, during Ms.Yovanovitch’s testimony. She said it sounded like a threat.

While she was testifying, tRump was tweeting about her.

That tweet was witness intimidation and witness tampering happening real-time for the world to see.

Ms.Yovanovitch spoke of her last day at work in Kyiv, in April. While hosting a dinner party in her home, to honor a Ukraine woman for her anti-corruption efforts, she received a phone call from the foreign service telling her that she needed to leave Kyiv on the “next plane,” because they were worried for her “security.”

☝️🏼Here we see Lev Parnas with tRump, who never met him, and Giuliani with Parnas, who much have fetched the coffee.

Moving on; the House Intelligence Committee is now in possession of new information. Documents provided by Lev Parnas, one of the two recently indicted mob-linked associates of tRump’s (sometime soon to be indicted) attorney, Rudy Giuliani, including voicemails, photos, and text messages. The new materials offer more evidence that tRump was withholding aid from President Zelensky in an effort to force him to get dirt on his political opponent.

It also sheds light on tRump’s meaning when he said of Ms. Yovanovitch: “she’s going to go through some things.” He wanted Ms. Yovanovitch, an anti-corruption ambassador, out of the way of his extortion plan.

The series of text messages below are between Lev Parnas and Robert Hyde, pictured above with tRump, who never met him. Hyde is running for Congress in Connecticut; I’m not kidding. He and Parnas seem to be plotting, with Russian help, to abscond with Yovanovitch for some nefarious reason. Murder? 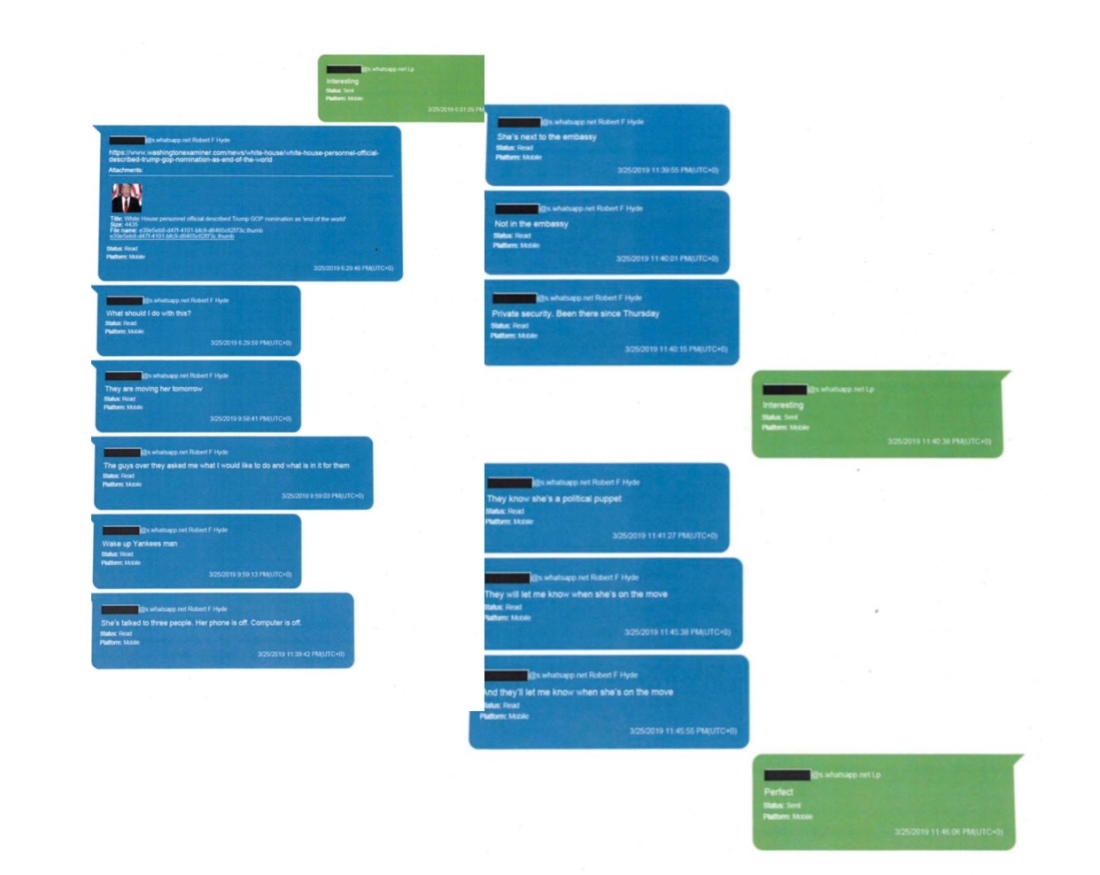 “Wow. Can’t believe Trumo hasn’t fired this bitch. I’ll get right in that.

“She under heavy protection outside Kiev.”

“She’s talked to three people. Her phone is off. Computer is off.”

“She’s next to the embassy.”

“They know she’s a political puppet.”

“They will let me know when she’s on the move”

“They are willing to help if you/we would like a price.”

“Guess you can do anything in the Ukraine with money… what I was told.”

“If you want her out, they need to make contact with security forces”

This reads like a script for a Martin Scorsese  mob movie.

Anyway, it underscores how brave Marie Yovanovitch was to testify. She is a hero. Do you know how we could honor her? We could tell people to read a newspaper.

Where is the public outrage?