Trump spoke to the New York Times on Thursday, from Mar-a-Lago, his West Palm Beach Florida resort. It was day 112 of 343 days away from the Oval Office.

I must now admit, math is not my forte. I walked out of a college placement math test, in tears with the blank test in hand, back in the days when dinosaurs roamed cobble stone streets filled with horse drawn carriages. Yes, tests were once done on paper.

That said, I would venture to say Trump has been out of office approximately 1/3 of the time he’s held the presidency in a stranglehold. That kind of makes us look bad, more so because he tweeted three days ago that he was headed “back to work.” If he is working, it’s on his golf swing. That doesn’t look good.

Another embarrassment he might feel while he’s at it— his MAGA hats, (millionaire asshole golfing again), which he wears whenever he possibly can. You too can own one for $40. It’s tacky… “looks bad.”

He might look in the mirror and consider how his entire physical appearance makes U.S. look. He never hesitates to judge others by their appearance, so I’d like to return the favor by pointing out his slovenly tent like suits, his too long red ties (compensating for something), the rat’s nest on his fat orange face… his gluttony shows. He represents us to the world… poorly.

I am embarrassed at his disrespect for anyone without a hanging organ. The way he tells female reporters to smile, disregards Angela Merkel, comments on Mrs Macron’s physical shape. Why does he think any woman wants his opinion?

He said this as his henchmen, members of his party, furiously worked in attempt to discredit Mueller with hopes of garnering enough public support to allow them to end the inquiry. They keep saying “it’s going nowhere,” when in actuality three members of Trumps team have already been indicted, and a dozen or so (math) more sealed indictments await the go ahead.

That does make us look bad, he’s right.

27 countries have documented Russian meddling in their political elections since 2004. In fact, Russia unsuccessfully attempted to breach France’s presidential election. They got the U.S. though. We look very bad with Trump at the helm. Look at him. 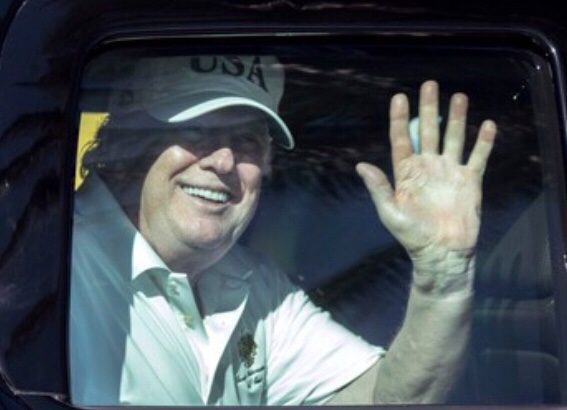 Trump is a con man who failed at business until Russia bailed him out. He has no political experience. He lied about having a desire to fix healthcare, help the middle class, fight big-pharma.

The United States is the only country that allows pharmaceutical companies to charge 1,400% more than manufacturing prices for a life-saving cancer drug. That is only one example of big-pharma’s business practices in the U.S… it not only looks bad, it looks like murder.

And “draining the swamp”—A swamp is a forested wetland, many of which can be found along large rivers where they are critically dependent upon natural water level fluctuations. Other swamps occur on the shores of large lakes. Some swamps … well, he is attempting to drain the planet of its natural resources, so in the literal sense, he is “draining the swamp.” It makes us look bad.

The political swamp however is thriving like never before. That we sit back helplessly, watching Trump hand us over to billionaires who pillage our healthcare and retirement, makes us look bad.

Well, who would walk away from a fool and his money? There is an old saying

—“Nobody ever went broke underestimating the intelligence of the American people.”

Can you underestimate that which is proven to be lacking? We look bad…

as we should, but Trump doesn’t care.