There are several disturbing items in the news this week, most are still underway at the G20 summit in Hamburg, Germany. 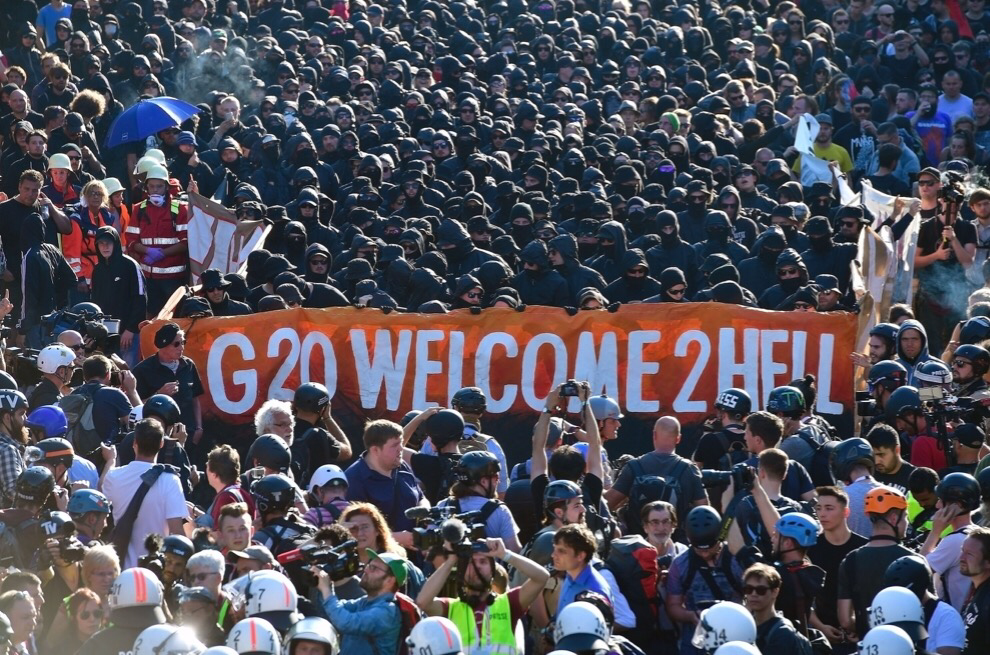 Yesterday (to steal a headline from “The Hill”) Donald Trump met his maker. Putin and Trump were penciled in for a 40 minute tête-à-tête, but true love can not be constrained. They bonded for 2:15 despite several attempts at coitus interruptus.
There were six players in the room: POTUS Trump, his Secretary of State Rex Tillerson, Vlad (the impaler) Putin, Russian Foreign Minister Sergei Lavrov, and two translators.

There is a he said, she said aspect to the meeting:

He says— (Putin’s side) Sergey Viktorovich Lavrov says Trump brought up accusations of Russian hacking, but was satisfied with Putin’s denial. He also says Moscow and DC will set up joint working group on cybersecurity.

She says— (Trump’s side) RExxonMobile Tillerson says “US-Russia” (that’s the evil spawn of Vlonald), will create bilateral forum to discuss “interference in the democratic of the United States and other countries” and on election meddling: “I think what the two presidents—I think rightly—focused on is how we move forward.”

Does anyone find this alarming? Both sides have confirmed their intent to work together to “discuss cybersecurity and election meddling.”

To me, the writing is on the wall. This power couple is strategizing and planning ahead for 2018 and 2020 elections. Meanwhile the GOP turns a blind eye for two reasons (imho): they’re enjoying a majority congress and pushing through legislation that would never pass with a democratic majority, and equally motivating is the fact that many of them have damning ties to Russian money.

Portending to vote out those corrupt GOP members is an empty threat, and they know it. Believing there will be a high turnover in the coming elections, eliminating those who have shown they are not working in the interests of their constituents but for an unseen hand, may be naive.

All future U.S. elections hold the risk of being controlled by Russia, with the help of Donald Trump. Unless we somehow turn this American ship, with it’s GOP shortage of life boats, away from the Russian iceberg…well with climate change we’ll be under water regardless.

Vlonald has had setbacks. Trump’s “Voter Fraud Committee,” a thinly veiled attempt to gather sensitive voter information from states, and called a blatant attempt at voter suppression, has effectively been shut down by 48 states so far.

In addition, there is an ongoing investigation into alleged electronic voter machine tampering, which may or may not have actually changed millions of votes in key states.

Meh, boring, so what else happenned during those 2 hours and 15 minutes? Personally, I am confident the subjects of a $500 billion oil deal between Russia’s state owned oil company, Rosneft, and Rex Tillersons ExxonMobile never came up. Nor do I think U.S. sanctions imposed by the previous administration, which have effectively halted progress in said oil deal, were discussed. It is more likely, considering the character of Vlonald, they discussed world hunger and climate change…or not.

Meanwhile CNN has reported— Trump’s State Department has granted U.S. Visas to 150 suspected Russian Intelligence officers entering under the guise of other business. You will remember in December, 35 Russian diplomats suspected of spying were sent packing and two compounds were seized by the Obama administration, in retaliation for election-meddling. Well this goes beyond replenishing those ranks. It is said there are now some 500 Russian spies in the U.S., many of whom have tried to gain employment at places with sensitive information, as others target Americans who have access to classified information as part of their efforts to gather intelligence.

Now we know why Trump wanted to return the seized compounds, in Maryland and New York, to the Kremlin.

Meanwhile, Robert (Obi-Wan Kenobi) Mueller and his A team of 16 top dawg lawyers are less than two months into their investigations of  possible coordination between the Trump campaign and the Russian government to influence the 2016 election.